Except for a few idealistic souls, doctors locate where the money is. There are so many of these white-coated professionals on the Upper East Side of Manhattan that you wonder why you’re about the only person you know who never draped a stethoscope prominently about your neck.  OK, maybe a number of physicians locate in simple, middle-income suburbs rather than Beverly Hills or Scarsdale, but how many would go to a place that is so rural that it is not considered even a village, but proudly calls itself a harbor?  One?  You might be lucky if that many park their bandages there, and to get that one person, a big-city plastic surgeon, to give up a life of money raising cheekbones, you’d have to offer something besides filthy lucre.

Such is that situation in the village, oops, harbor, of Tickle Cove, Newfoundland, located within a day’s travel of St. John’s International Airport but so far from that “big city” that it might as well be somewhere in Middle Earth.   The townspeople, about 120 strong, live on welfare, but at least it’s a place where postal clerk knows your name.  The typical resident has never even left that harbor, much less seen someone outside the area’s humble restaurant and fishing cove.  What do they do for medical care?  Nothing, apparently. Why are these people who drove out their only source of income by over-fishing the water suddenly eager to sign up a doctor?  Simply this: a corporation whose officers are New-York based, are looking for a small harbor area to locate a plant that has something to do with oil, offering enough jobs to employ every man and woman in town, but the corporate leaders require a certificate that a doctor is in residence. Now, how to convince such a person to sign a contract to stay and treat the folks?  The town’s leading spokesperson, Murray French (Brendan), working with the entire population, must seduce a physician, aiming their arrows at one Dr. Lewis (Taylor Kitsch), who has taken a month off to check out Tickle Harbor.

What emerges from this small Canadian comedy photographed on or near location in Newfoundland and Labrador is an absolute delight, filled with writers Ken Scott and Michael Dowse’s witty lines and Don McKellar’s subtly droll direction.  We in the audience get a look at these down-home types from the bearded welfare dependents who seem to drink up their modest checks, some elderly women manning a switchboard and listening in to every conversation Dr. Lewis makes to his girlfriend back home, a pretty but cynical young woman, Kathleen (Liane Balaban), who works in a convenience store, the right-hand man, i.e. drinking partner of Murray French who goes by the name Simon (Gordon Pinsent), and a bunch of extras who join in the big fraud. They reward the doctor by pretending there’s good fishing (Simon in a diving suit threads a dead, frozen fish, onto the man’s hook), and that there’s extreme popularity of cricket, the doc’s favorite sport (nobody in town knows a thing about it), and that one of the townsfolk loves jazz, joining the Dr. Lewis in listening while hating every minute of the music.

This is a movie that recalls Peter Weir’s 1998 effort “The Truman Show,” where a fellow played by Jim Carrey is unaware that  his entire life is being secretly taped and enjoyed by a large TV audience.  We all know what will happen during the last time the corporate bigwigs investigate the town as the future home of their oil plant, but formulaic or not, “The Grand Seduction” will seduce all in the movie audience except those with the hardest shell of cynicism. 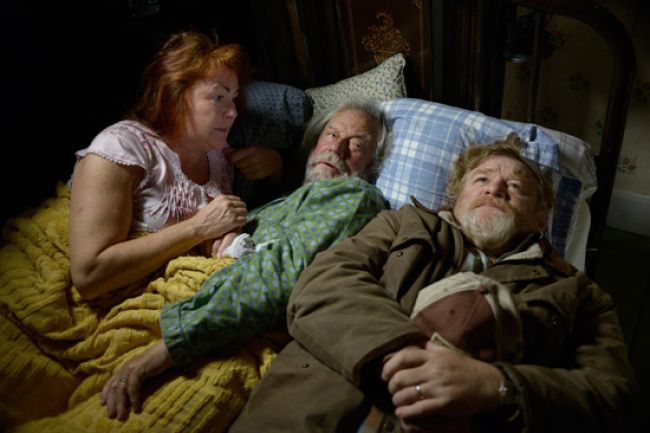