The most impressive feat in “Frequencies” is its exceptional union of science and romance, but that only makes it more noticeable when the balance is off, even if just the slightest bit.

“Frequencies” takes place in a world where a person’s frequency determines their luck, relationships, potential and everything in between. Shortly after a grade school test confirms that Zak is low frequency and Marie is high frequency, the two begin experimenting with their tendency to literally repel each other regardless of how they truly feel about one another. Years later, Zak (Daniel Fraser) works tirelessly to overcome his fate and challenge the scientific fact that he and Marie just aren’t destined to be together.

“Frequencies” is a smart and ambitious movie, but sometimes, too much for its own good. This idea of everyone having a definitive frequency that dictates his or her place in the world is deeply fascinating. The moment the movie explains this rating system and what it means for an individual’s quality of life, you instantly wonder where you might fall on that scale, making the scenario highly engaging right at the start. But, the further it delves into the science behind frequency and how to change it, the more distant you become from the concept.

The first half of the movie is about a budding romance. Zak and Marie meet as young children and agree to conduct an annual experiment. Because they’ve got such drastically opposing frequencies, when they’re together, something is bound to happen, and specifically something that pulls them apart. Regardless of that proven fact, there’s an undeniable attraction between the two and watching them go from accepting their frequency as fact to giving into their feelings is quite moving. And the same is true of the first portion of the film featuring Zak and Marie as adults. It’s still about science, but also deeply rooted in emotion and heart. When that relatable, human connection starts to fade into the background, “Frequencies” falls apart.

One of the side effects of having an exceptionally high frequency is that you don’t have any emotions and that’s kind of what happens to the film itself. “Frequencies” gets so academic and equation-heavy that you’re not able to engage with the characters anymore. The story is told in a non-linear fashion so does come with the thrill of being able to double back and learn new information along the way, but as the narrative becomes less and less about Zak and Marie and much more so about the technology, those discoveries matter less and less.

“Frequencies” suffers when it forgoes heart for science, but it’s still a very impressive third feature from writer, director, producer and editor Darren Paul Fisher. This is an ambitious concept and project overall, and Fisher’s firm handle on every single element, down to the tiniest detail, is absolutely vital to the success of the film. Every smile, insert, sound and decision in this movie has purpose and Fisher does an outstanding job upholding that in the most delicate, natural fashion.

“Frequencies” is the exact opposite of a “sit back and relax” type of movie. When Zak and Marie are young and first exploring the possibilities of having a relationship, that’s not a problem because you come to care about them and instinctively root for them to find answers so that they can get what they want. However, when an abundance of unfamiliar words, equations and involved sciences enter the situation, that’s when the movie runs the risk of losing your focus and if that happens, the pieces won’t add up and that drastically decreases the satisfaction of the experience. 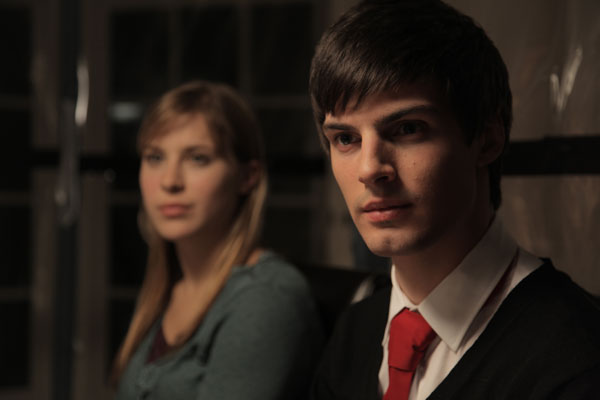