It was 55 years ago that Walt Disney’s animated version of “Sleeping Beauty” first left her mark. But the villainess from that film, Maleficent, endured every bit as much as the title character. Now she even has her own film, too. In “Maleficent,” Angelina Jolie stars as the vengeful enchantress. But, thanks to a few inventive story twists, she’s not really as bad as she’s made out to be. The true villain of the piece, actually, might just be King Stefan (Sharlto Copley), which means maybe he’ll get his own film as well in a half-century and change. ShockYa recently had a chance to attend the film’s Los Angeles press day, and chat with the director and stars about their experiences making “Maleficent.” The conversation with the aforementioned Copley is excerpted below:

Question: You were awfully cheerful for the villain, I want to just say. And you must’ve gonet to Glasgow to do work on your accent.

Sharlto Copley: Yeah, I was quite proud of that accent. I’ve always done accents and I have kind of have very distant Scottish relatives — not enough that they were in my life that I could be exposed to the accent, but growing up in South Africa, you know, we were exposed to a lot of British influence, you know, English variations and derivatives. And so I love all the dialects of that area. And choosing the accent is usually the first and most important part for me of a character, because to me so much comes through in accent. So I knew that I wanted him to be Scottish, I knew this [was] probably going to be sort of old world English-type accents and I was, “I want Scottish” as the king. And in my screen tests I did Scottish because I knew, for example, there’s something very interesting about that accent, where it works equally well playing the common man as it does a regal. There’s a sound in the Scottish accent of real royalty and majesty, where you know the guy from South London wouldn’t sound as good as the king, you know what I mean? It doesn’t translate as well. But somehow the Scottish common man sounds okay in the same version of the dialect. So that’s a reason why I chose that accent in that case.

Question: In the film there’s a younger version of the character, Stefan, who appears as a boy. Do you get to sit down with the other actor?

Sharlto Copley: No, you don’t. Or in this case I did not. And they actually had somebody else, and I think both for Angie and I for some reason at some point they switched (actors), so I did meet a guy who I thought was playing the younger me … Well, no, I met the guy who was playing the 15 or 16-year-old me, so no, no, I didn’t get to. But it is interesting. I saw a South African TV series the other day called “Shaka Zulu,” and what was very interesting was they played the 16-year-old version of the character but they used the voice of the man, which made sense. It suddenly was like I totally believe that’s the same guy because of his voice. So it was like he was 18 or something where he wasn’t too young, you know, you couldn’t do the 12-year-old voice, how can I do the 12-year-old voice myself? But I could probably do the younger voice of myself, which I think would actually help audiences buy a transition like that more. And they never seem to do that in films, they always use the voice of the young actor, but it sort of blew my mind, it was like this old TV show done in South Africa in the 1980s, and I was like, “Wow, that actually works surprisingly well if you do it properly.”

Question: How was it working with Angelina Jolie?

Sharlto Copley: I just sort of was like, let’s leave the whole most famous woman in the world thing at the door and then let’s just do this. I took that chance and thankfully that’s what she wanted from me I suppose. And she was just very grounded and sort of very respectful and just treated me, you know, surprisingly in some ways perhaps to some people or from the outside, just sort of as an equal, you know, which … I wouldn’t have expected that, I wouldn’t have required it. I really, really enjoyed the process of working with her. She’s one of the actresses I admire most. Very specifically what I admire is there’s very few actresses who are known and loved as movie stars who would take a role, for example, where they’re going to say, “I hate you” to a baby, and know that they can do that and still have the audience root for them. You know, it’s a certain type of actor that has that range in knowing fans love [them] as the hero the whole time. It’s difficult for people once they become movie stars to do that — even if they have the acting chops to do it, the audience won’t accept it from them if they try sometimes. So, umm, I think what she had sort of seen and commented on in “District 9” was my sort of layers of being able to mess with [layers of sympathy] as one watches the character, you know, and playing with that — is this guy good, is he bad? He’s complex. And so I think we gravitated to wanting to work together because I could feel that with her and thought this is gonna be a very interesting film because I’m going through this almost the reverse of what I went through in “District 9,” starting nice and just deteriorating. She’s starting nice, going bad and then coming back, and that I thought would be very interesting, energetically, to sort of provide a kind of energetic chemistry for the audience, which I think it kind of still does.

Question: Regarding “District 9,” which you brought up — I remember talking to you upon its release, and you weren’t totally sure you wanted to be an actor. You’re still doing it and doing it well, so I guess you are an actor now.

Sharlto Copley: I guess so, yeah. I’m going back soon, I hope, into behind-the-scenes. And I’m writing a lot, you know, so I’ll probably be directing something that I write within the next couple of years. I’m really looking forward to doing that as well.

Question: But you’re in Neil Blomkamp’s next film — you’re a robot in “Chappie,” is that right?

Question: What was the dangerous city?

Sharlto Copley: Oh, well, “Chappie” was shooting in Johannesberg, and for me, you know, because it’s where I grew up and I’m playing a light character, that was fun. And working with Neil was very rewarding the third time out, it was very easy for us.

Question: What can you say about that relationship?

Sharlto Copley: I think we’re finding our stride now on this third film, you know, and going back to smallest-dollar filmmaking. I’m doing the lead again, which I haven’t really done since “District 9,” so this was something that I really felt would be fun. And I could trust Neil completely to make sure that the animation of what I’m doing was on point. I mean, the part that’s blowing my mind is the animating over my movements, and … they’re using absolutely everything that I do in sort of poor man’s motion-capture style. I was never sure how this would translate, but the amount of me that is in the character is incredible. Like, I can see in a little sequence if there’s like a half a second where there’s a stunt guy that was doing a part of a sequence, I can tell that that’s the stunt guy in watching the animation. I can tell you tracing over the stunt guy because he moves slightly differently from me, and if you use a performance so movement-based, the audience won’t see it but I see it. And it’s quite amazing because you’ve created something totally different now. Now you literally [only have] to focus the behavior, the essence of this being — you’re not at all concerned about the appearance which you normally would be heavily concerned about as an actor.

Question: When a project comes your way, what is the first thing you look for? It seems like you’re doing a lot of bigger-than-life science-fiction or fantasy.

Sharlto Copley: You know, I can’t really say. It’s sort of an instinctive thing. I will usually just have an instinctive reaction, and then sometimes think about pros and cons and whatever afterwards. But I’m always trying to see if I can play something that is based on truth that metaphorically is sort of a characterized story version of something that exists in reality. So Stefan, everything he does to me … is drawn from ways that human beings behave — ways that, you know, ambitious men behave. From my point of view, Stefan loved [Maleficent] the whole way, you know. This is his true love who he betrays for power, he chooses that. It’s like the equivalent of the man who chooses work over his family. And that man usually doesn’t do it in one moment, where it’s like, “Listen, if you sacrifice your true love, you can be the chairman of the board and make a hundred million dollars.” You know, he’s gonna say no there. But he’s gonna gradually do it because he’s spending more time at work, he then gets to a certain level of success, he trades his wife in as she gets older for the younger version, he’s never there with his kids. It’s like Stefan’s doing all of that — he’s living with his guilty conscience of having betrayed the one person that he truly loved, you know, and anybody who’s in any way betrayed somebody that they really truly loved, lives with their conscience. They maybe don’t drive themselves crazy as Stephan does, but they live with that pain.

Question: You have a very interesting new audience with this film. It’s not just going to be, you know, adolescent males who recognize you from “District 9.”

Question: It seems to me you’re gonna have the experience of being recognized by small children.

Sharlto Copley: I sort of hope not because it’s not really the role that I’d like them to recognize me in. And so far I’m doing well. I actually went to watch the “Maleficent” teaser promo in the 4-D experience at Disneyland because I happened to be at Disneyland two weeks ago. And I went there with a normal audience, walked in, walked out and was fine. I only got recognized in the park a little bit later by somebody, who went, “You were the king.” But that’s what is fortunate about being a character actor — mostly I seem to get away with it. And if they do recognize me, it is one of those things of like, “Don’t be like Stefan now, boys and girls,” you know.

NOTE: “Maleficent” opens May 30. Check back for more interviews with the rest of the cast and crew all week. 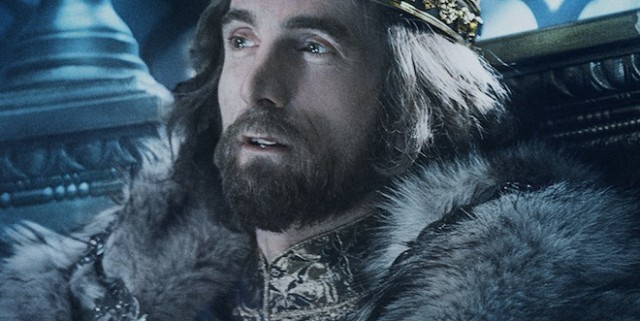