Half of a Yellow Sun Movie Review

Title: Half of a Yellow Sun

A well-intentioned historical drama that unfolds in the 1960s against the backdrop of the Nigerian Civil War, “Half of a Yellow Sun” features a couple strong lead performances and the sort of stark socioeconomic class conflict and high stakes that often lends itself to engaging adaptation, but the film gets caught up in the undertow of mawkish melodrama early on, never to fully recover.

The story centers around a pair of twin sisters from a well-to-do family, Olanna (Thandie Newton) and Kainene (Anika Noni Rose), who return to their homeland after expensive educations in England. Taking over the various family businesses, Kainene falls in love with English-born writer Richard (Joseph Mawle). Olanna, meanwhile, is smitten by Odenigbo (Chiwetel Ejiofor), a radical professor, who lives with his devoted houseboy Ugwu (John Boyega). Odenigbo’s provincial mother (Onyeka Onwenu) regards Olanna more with flat-out hostility than simple distrust (she even deems her a witch), and doesn’t approve of their relationship, which is in short order tested by even greater conflict. As the country descends into sectarian chaos and armed battle — the Igbo people fighting to establish Biafra as an independent republic — the sisters find themselves struggling for survival.

Based on an award-winning novel of the same name by Chimamanda Ngozi Adichie, “Half of a Yellow Sun” is helmed by Biyi Bandele, a novelist and playwright making his film directorial debut. And Bandele does a good job, on a technical level — John de Borman’s cinematography is lush and engaging, and the movie is anchored by a very classical, sweeping string-oriented score from Ben Onono and Paul Thomson. The film, though, makes consistently odd choices of what drama to foreground and what to relegate to the side, or skip over altogether (one character’s death is presented in extended monologue, as if this was a stage play of both modest means and imagination). Most damningly, “Half of a Yellow Sun” is preoccupied to a yawning degree by Olanna and Kianene’s romantic entanglements. Yes, this augurs a betrayal between sisters that informs their paths going forward, but given everything else going on in Nigeria at large and the lives of the people surrounding these characters, this fatal misplay tips Bandele’s movie into a tailspin of boredom from which it never recuperates.

The film’s strongest selling point is certainly found in its performances, particularly those of Ejiofor and Newton, who have the ability to tap into both the headstrong qualities that power their characters and the regret that often flows from that. Would that that were enough to redeem this soapy, forgettable tale, alas. 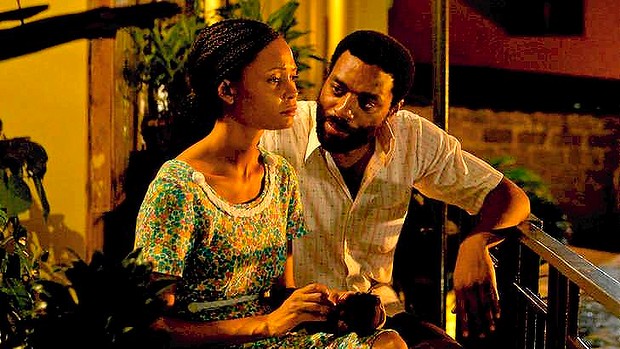