Vicious aliens, wicked combat and Tom Cruise charm are all good fun, but what’s the point when the story makes no sense?

Cruise is Major William Cage. He’s in the army and has a high rank, but he’s a man of media relations, not combat. When his superior (Brendan Gleeson) decides it’s time for the world to see him in battle, Cage finds himself face-to-face with invading ETs donning an ExoSuit equipped with heavy artillery he doesn’t know how to operate. Sure enough, he’s taken out fast, but then, Cage gets another chance. His death puts him into a time loop, letting him live, die and repeat that same day over and over again, giving him the opportunity to hone his skills and figure out what he has to do to eliminate this alien race.

The world building and early character development in “Edge of Tomorrow” is particularly successful, making the movie strikingly engrossing right from the start. It opens with an eerily exhilarating montage of news clips chronicling the Mimics arrival, the immediate devastation that follows and then the development of the jacket technology that gives humans a shot.

There’s clearly a laughably steady stream of Cruise-headlining sci-fi thrillers, but there’s no denying that the guy is a total natural in that spot. However, it’s the earlier portions of “Edge of Tomorrow,” when Cage goes from media relations king to lowly private, that Cruise shows off his best work. He effortlessly sells himself as a smooth-talker who struts around in his crisp, clean Major’s uniform with all the confidence in the world, so when that rock-solid composure cracks, the resulting meltdown is especially shocking and hilarious.

“Edge of Tomorrow” is funnier than one might expect, but Cruise nor the writers ever undermine the fact that Cage is being thrown into a deadly scenario and won’t be able to defend himself. Bill Paxton’s drill sergeant keeps things light through non-stop over-the-top lectures and outrageous demands while Cruise has Cage shaking in his boots for the entire first act of the film, and the combination lets you enjoy the humor without forgetting the reality of the situation – that Cage’s future is grim.

By the time Cage is killed, “Edge of Tomorrow” has already established a comprehensive sense of the state of the world, given you a multi-dimensional main character who you’re eager to follow, surrounded him with colorful, unique supporting players and put them all up against a vicious, hard-to-kill alien race. It’s no secret that “Edge of Tomorrow” takes a “Groundhog Day” approach to its alien war, but that awareness doesn’t lessen the excitement of the scenario in the least. Even though you know Cage will eventually die and then get another chance, that first time he wakes up, it will rouse a sigh of relief. You’ve come to know and like the guy, and then experienced roughly ten minutes of very intense combat with him. When he comes to safe and sound, you’re genuinely pleased to see him alive.

Cage’s first attempts at figuring out what happened to him and how he can use it to his advantage works exceptionally well. Paxton’s unforgettable dialogue makes for an amusing recurrence as do mid-battle deaths and Cage’s pathetic attempts at trying to convince others he’s really living, dying and repeating his days again and again. It’s fun for a while, but just before the joke expires, Rita comes in. With Rita’s help, Cage can use his condition in new ways, keeping the concept fresh and giving the narrative loads of forward momentum. But then that’s it. Roughly halfway through the film, their mission and relationship peak and after that, it’s a mindless mad dash for the end.

It’s as though, all of a sudden, the filmmakers realized they were about 90 minutes into the film and had to wrap it up fast. There are memorable moments in the latter portion of “Edge of Tomorrow,” namely a smart, well-choreographed race through a hallway where Cage uses past run-throughs to deftly dance around anyone who might get in their way, but they’re short-lived thrills. Eventually, the audience doesn’t experience any more time loop cycles. From the viewer’s perspective, Cage already knows what to do so we’re just supposed to take his word for it and watch him go through the motions until the end of the film. It isn’t engaging and, therefore, far less exhilarating.

“Edge of Tomorrow” is a puzzle. Cage needs to destroy this alien object called The Omega and he has to figure out how to sneak around the Mimics in order to do it. The movie is most successful when we’re discovering those paths and techniques right along with him. As soon as it feels as though he’s loops and loops ahead of us, the connection to the character and the involvement in the mission dissipates until it disappears completely.

Then, what ultimately puts a stake in the entire experience is the ending. Simply put, it makes no sense – literally no sense – and it’s devastatingly deflating to be left with nothing in the end. 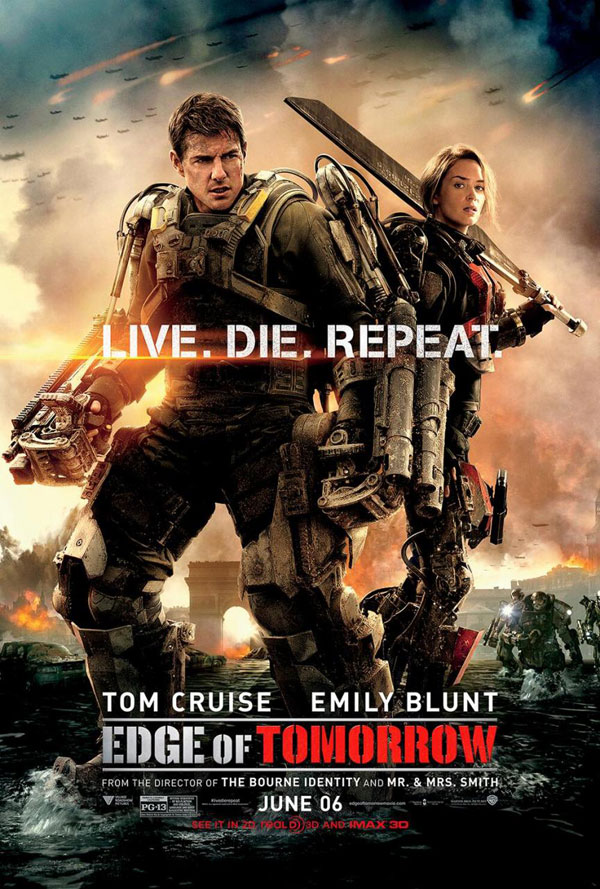