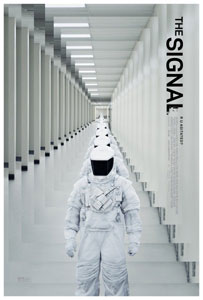 It isn’t easy getting your first feature off the ground, but William Eubank managed to pull it off and in a rather unconventional manner. He didn’t attend a traditional film school or track down an industry contact willing to give him a shot. Eubank entered a Red Hot Chili Peppers music video contest – and lost. But he did wind up with quite the consolation prize – the band Angels and Airwaves agreed to both produce and score his first feature, “Love.”

After four years of work that included building a fully realized space station set, writing, directing and shooting the film himself, Eubank wound up with a final product that would go on to collect laurels from Toronto After Dark, Fantasia, Fantastic Fest, Sitges Film Festival and more, and ultimately afford him the opportunity to move forward with his sophomore effort, “The Signal.”

The film features Brenton Thwaites and Beau Knapp as Nic and Jonah, two MIT students traveling cross-country with Nic’s girlfriend, Haley (Olivia Cooke). When their hacker rival gets in touch with them during the trip and reveals that his location is within driving distance, the guys just have to check it out. However, upon their arrival, things go awry to say the least, they black out and come to in a hospital of sorts, surrounded by men in hazmat suits who refuse to divulge why they’re being held.

Roughly five months after premiering at Sundance, “The Signal” is getting its limited theatrical on Friday, June 13th and Eubank credits persistence and resolve for helping him get there.

“You gather stuff from all these experiences, so I guess no matter what choice you take, you’ve just gotta keep going cause that’s the hardest part; no matter what you do, you’re gonna get to a lot of nos and it’s important that in those nos you keep chasing until you get to a yes, you know?”

By chasing those yeses, Eubank got the chance to put his technical prowess to use and show off some outstanding ability as a visual storyteller while also enhancing the experience by placing prime importance on using narrative and emotional subtext to streamline his characters’ motivations as well.

“As a director, you’re just trying to be the guy who is, #1, you cast it okay, so then the next step is just making sure, especially on an indie film where you’re shooting it all out of order and there’s crazy things going on, that the motivations stay true.

So you’re trying to kind of stay up in your director’s helicopter and you’re overviewing the story and you’re like, ‘Oh wait. We’re just coming from this scene, we’re going to that scene, he’s this way right now, which he’s doing a believable job, but we’re coming from here.’ I feel like as a director, you’re just trying to motivate the pacing, keep things moving and also keep them true to where they need to be in the forest, if that makes any sense.

And then the final part, the final part is the minutia of a scene or the minutia of a performance. And hopefully you don’t even get to that part because that’s all happening. Do you know what I mean? I feel like as a director, you always think, ‘I’m gonna be directing the actor. I’m going to be making him act a certain way.’ And the irony is, that is probably the last job that you have and if you have to be doing that, you’re in trouble already, you know? You’re just really more worried about the motivations of something and keeping the story flowing because you, as a director, have to keep your eye on the forest, you know? Not just the trees.”

And that approach really is vital to the success of “The Signal.” When Nic wakes up in captivity, Laurence Fishburne’s Dr. Wallace Damon isn’t giving him any answers. The only way you’re going to figure out what’s really going on is by assessing the past and the current situation right along with Nic, and that makes the film a particularly absorbing and suspenseful experience.

Are you ready to get agitated with Nic and see what “The Signal” is all about? You can catch the film in theaters this Friday, and, while you wait, be sure to check out our full chat with Eubank in the video interview below in which he discusses building his very own nonlinear editing system, the mix of sci-fi and horror, working with Thwaites, Fishburne and more.