“The Signal,” from co-writer/director Will Eubank, made a buzzy splash at the Sundance Film Festival this year, where its low-budget mixture of science-fiction and mystery proved a heady combination — especially to distributor Focus Features, who snapped it up for a counter-programming run amidst much bigger-budgeted summer action fare. The film centers on three MIT students (Brenton Thwaites, Beau Knapp and Olivia Cooke) who take a detour on their road trip through the Southwest, in an effort to track down a hacker who has been messing with them. Odd occurrences ensue, leaving the trio in a waking nightmare involving continued interrogation at the hands of Dr. Wallace Damon (Laurence Fishburne). For ShockYa, Brent Simon recently had a chance to speak to co-star and noted character actress Lin Shaye one-on-one, about her impressions of and experience on the movie. The conversation is excerpted below:

ShockYa: “The Signal” is so experiential, and the sum is greater than the whole of its parts, so I was wondering how it read, because it’s also so visual.

Lin Shaye: The mystery of the film even reads through the script, because as you’re reading it you’re seeing lots of descriptions of places, and the dialogue is not always a lot of narrative, basically. But it was still a page-turner for me, and I wanted to see where it was going and who these people were. I think that Brenton and Olivia and Beau give such humanity to the three characters, when you actually see what they bring to those people it makes it more amazing. But I didn’t know that yet when I read the story — I just thought it was a good story, and I was really engaged completely. When I got to Miribelle (my character), the poetry of what was written, the way the writers have her express herself and her dilemma, so to speak, was fascinating to me, and really exciting. It opened up my mind about who she was, what she was missing, what she wanted and where she’s been — all the questions that an actor wants to ask themselves about a character. She has her own mystery, which I thought was so powerful — and even though she’s only in those few scenes, I fell in love with her. When (anyone ever called) her the crazy character, I said, “No, no, no, she’s not crazy, she’s broken.” And there’s a sadness and desire to hang on to the joy that she might have had in life that made her very appealing to me, and so excited to play her.

ShockYa: That’s a beautiful way to express that. And I think that you’d be interested and delighted to know that, even though Miribelle is a smaller character, the audience with whom I saw the film was very much interested in her plight. And of course there was a lot of debate about exactly who she was, and what had happened to her.

Lin Shaye: What Will wrote elicited all those great questions, and is a tribute to him as a writer, as well as a director. I think the characters all pose such interesting personal problems. And that’s partly what engages the audience so much — that you invest in their journey. And somehow the beauty of the film also — David Lanzenberg, the cinematographer, is like a painter, I think — really catches you. It’s about love and relationships and mystery and things you can’t understand. It’s about questions we all have, and through these characters and the way the story is told we go on this personal search. And also the surprises that happen… even after having done the role, when I finally saw the film I was so captivated and so emotionally engaged that I literally cried like a baby at the end of the movie. It just had such a powerful emotional effect on me. I think it grabs (viewers) in a certain kind of way that is very unique. I think that people who love this movie are really going to love this movie.

ShockYa: You obviously have meetings with a director before a film. But the physical production process is a ground game, and death by papercut, with the potential for all sorts of little compromises. When you’re air-dropped into a movie, as a character actor or actress, in a smaller but key role, how difficult is it to get a sense of the movie’s tone? Because I’m sure you have an idea of what your character is supposed to be, but I’m equally sure there are times you get to set and have to adjust.

Lin Shaye: It’s always different, that’s the only thing I can say. (laughs) I always joke about this, but when you learn your lines in your living room facing left and then you get on set and you’re facing right and it’s a different room than you pictured, it’s (a curveball). I’m being somewhat facetious and silly here, but you learn your words and whatever, and you know how you want to play it and what’s important to you, and you really need to know with a certain strength of conviction the things that really need to hold wheny ou get there, because as you say, when you get there it’s always chaos of some sort. The set is never like what you imagined. The director has his ideas, obviously, and you have to be able to let go of everything that you’ve worked on, and you hope that the residue of the elements that made you really want to do the movie to begin with … hold. You do want to have those dialogues with a director. … and it’s always fascinating, which elements change simply because you’re working with another actor. Suddenly you’re looking in someone’s eyes and they’re giving you something completely different than you ever imagined. So sometimes it throws you but you need to be able to change what you’ve created, in order to be able to relate to them and what’s going on in the scene. You have to be able to be mobile from within your core, and operate out from that, because whether it’s the sound equipment is in your face or you’re rigged a certain way or the actor doesn’t come into the scene when you thought they were going to, there are a million variables, which is part of what makes it so exciting. I think you have to be both fluid and also have a strength to the core of what you create, so that it’s a marriage of what you first thought it could or should be, and what it actually becomes.

NOTE: “The Signal” opens June 13 from Focus Features. For an interview with director Will Eubank, click here: http://www.shockya.com/news/2014/06/08/exclusive-director-will-eubank-talks-the-signal/. For an interview with actor Beau Knapp, click here: http://www.shockya.com/news/2014/06/04/exclusive-beau-knapp-talks-the-signal/ And check back at ShockYa throughout the week for more coverage from the film, and a full review in advance of its release. 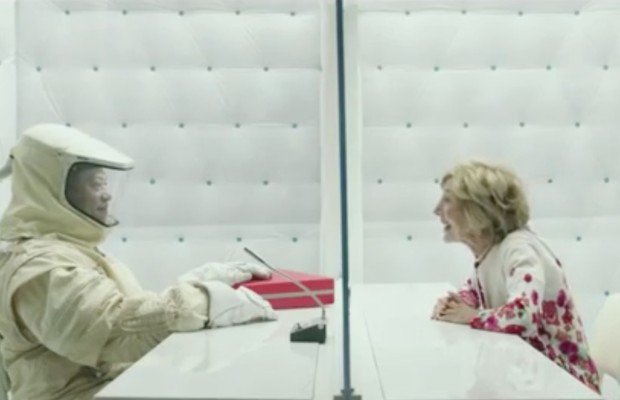