After the head cheerleader dies right before the start of senior year, outsider Maddy (Rein‘s Caitlin Stasey) decides to try out for the cheerleading squad in an attempt to infiltrate the elite club of seemingly braindead skanks in an  attempt to destroy them from the inside, much to the chagrin of her friend and fellow outsider Leena (Sianoa Smit-McPhee). During a night of heavy drinking and partying, Maddy and three of her fellow cheerleaders accidentally drive off a cliff and die in the river. Leena happened to be nearby and attempts to rescue her best friend and passengers to no avail. Being a practicing witch (but of course) she manages to bring the 4 dead girls back to life – The slutty Tracy (Brooke Butler), the virginal Martha ( Reanin Johannink) and her little sister & school mascot Hannah (Amanda Grace Cooper). When they all wake up the next day, the resurrected find they are all magically connected to Leena and they have an intense hunger for blood which they happily feed on the jocks who also saw the accident and did nothing to save them.

The Good: I really enjoyed this film, surprisingly.  I didn’t know what to expect since co-director Chris Sivertson brought us the Lindsay Lohan train wreck I Know Who Killed Me (dude you’re never going to live that down), but since Lucky McKee (May) was also directing/writing, I decided to give it a shot. I thought it was going to be a cheap cheesy mashup of  Bring it On, Evil Dead, Mean Girls, and The Craft and hey, I can admit when I’m wrong. The dialogue was funny, you get to see  hot girls in their underwear and even some decent bare boobs. I loved the scene where one girl is banging a guy in the bathroom and another girl is feeding on another dude at the same time and all five girls drop to have some sort of painful simultaneous orgasm. Not that I dug the agony, but it was an unusual way to depict how deep was their connection. Also, the actors look close enough to high school age to be believable, and lesbian scenes always improve a movie.

The Bad: The CGI and make up effects are a couple of steps above Troma. The stage blood looked fake and too gloppy. When a dude gets his head broken and blood floats into one of the cheerleader’s faces, the flecks of blood kind of disappear. C’mon, if you’re gonna do the effect, don’t half-ass it.

All Cheerleaders Die was a good time.  I laughed, I felt for the characters, I want to see more. 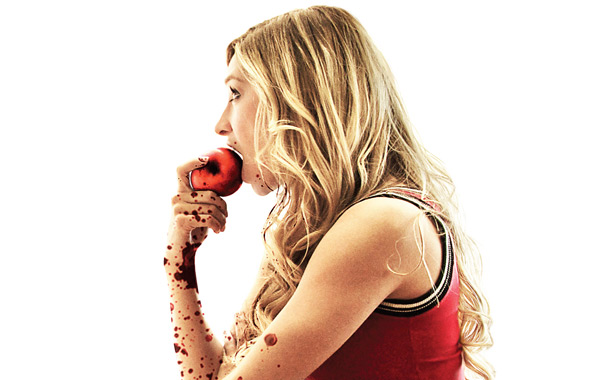 Cancel reply
Get Ready For Espionage In The November Man’s Teaser Trailer
Exclusive: 25 To Life Gets A New Clip
To Top