A new clip from ‘Dawn of the Planet of the Apes,’ titled ‘Koba’s weapon,’ has been released by Fox International. The clip features an ape approaching two men, who are drinking together. While the two are initially apprehensive of the ape, he wins them over by wanting to drink with them. But the ape soon turns on them by grabbing the gun held by Koba, played by Toby Kebbell.

The action-adventure film, which is a sequel to the 2011 hit, ‘Rise of the Planet of the Apes,’ is set to be released on July 11 in 3D. ‘Dawn of the Planet of the Apes’ was directed by ‘Cloverfield’ helmer, Matt Reeves, and written by Mark Bomback, Rich Jaffa and Amanda Silver. Besides Kebbell, the movie also stars Andy Serkis as Caesar, the leader of the apes, as well as Jason Clarke, Gary Oldman, Keri Russell, Kodi Smith-McPhee, Enrique Murciano and Kirk Acevedo.

Fox International has released the following synopsis for ‘Dawn of the Planet of the Apes’:

A growing nation of genetically evolved apes led by Caesar is threatened by a band of human survivors of the devastating virus unleashed a decade earlier. They reach a fragile peace, but it proves short-lived, as both sides are brought to the brink of a war that will determine who will emerge as Earth’s dominant species. 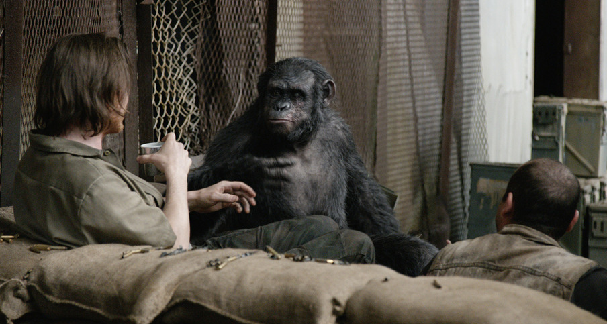