Title: The Only Real Game

A stirring nonfiction sociocultural curiosity that taps into the power of sports to bridge divides and develop kinships across incredible distances, director Mirra Bank’s “The Only Real Game” tells the story of a small pocket of India obsessed with American baseball. Narrated by Academy Award winner Melissa Leo, the film is an involving reminder of the fact that ambassadorships need not be political, and that human understanding and connection turns on a much more intimate axis.

“The Only Real Game” takes place in Manipur, a remote eastern Indian bordering Burma, beset with 25 percent unemployment plus many other problems — not the least of which is violence which has racked the area since a forced territorial merging post-World War II. Nationalist police, under threat of insurgent attack, operate with impunity, often beating and bullying residents indiscriminately. Caught in the middle are normal residents, who have lived under martial law for decades.

In the land of cricket and soccer, baseball arrived on the wings of war, and quickly found a welcome home. American G.I.s stationed in Manipur after the Japanese bombing of the region in 1942 would stage games on their bases, which were staffed with locals. Baseball caught on — the seeds planted for future generations of fans. (“It means more to me than having a husband,” says one of the many area women obsessed with the game.) With Muriel Peters’ First Pitch non-profit organization spearheading a charity effort, manufacturer Spalding donates a bunch of equipment and Major League Baseball dispatches two special envoys, Dave Palese and Jeff Brueggemann, to head up clinics and help instruct Manipurian coaches and players alike.

Editorially (if somewhat understandably), the film gets tangled up a bit in the thicket of history and politics. But Bank is smart when it comes to interweaving the stories of the American coaches and their Indian counterparts, striking an easy, engaging balance. And she also finds a nice parallel to the stalled or blocked dreams of several native subjects in the story of Brueggemann’s promising pitching career, derailed by a summer job taken out of economic necessity.

As sad as its surrounding reality is, “The Only Real Game” has the good sense to still locate and indulge a playful and occasionally dark sense of humor. When Brueggemann and several of his cohorts take a trip into a rebel-controlled area to look at habitats that an architect wants to incorporate into the construction of a proper baseball field and complex, a uniformed military officer says, “This area is very calm — a very calm place,” even as a soldier walks by with a shoulder-mounted bazooka.

In an ending admirably devoid of pat, artificial uplift, there’s no way of knowing whether this simple act of outreach and baseball instruction will help bring the community of Manipur jobs, and/or a measure of peace. But “The Only Real Game” reminds viewers of the power of shared passions, and the ability of so-called trivialities like sports and the arts to transcend borders and false adversarial designations.

NOTE: “The Only Real Game” opens in Los Angeles at the Laemmle Music Hall. For information about its Canadian premiere, Portland theatrical release, other screenings and more information on the film in general, visit www.OnlyRealGameMovie.com. 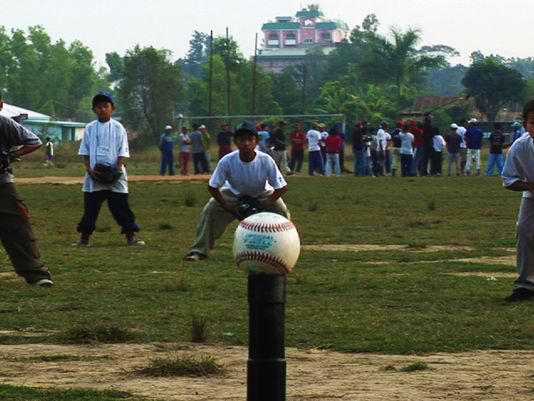