The Walking Dead: The Complete Fourth Season Coming to DVD and Blu-ray This August

The end of the summer are usually called the dog days of the season, but this time around, they’re going to be the season’s zombie days!”The Walking Dead: The Complete Fourth Season” will be released on Blu-ray plus Digital HD with Ultraviolet and DVD on Aug. 26.

Each format will include five discs, with the episodes presented exactly how they were broadcast on television. tHE Blu-ray plus Digital HD with Ultraviolet also presents the episodes crystal clear 1080p high-definition and lossless Dolby TrueHD 7.1 audio.

Just like with past “Walking Dead” releases, this release will have tons of bonus features, such as deleted scenes, never-before-seen production footage and audio commentaries. The Blu-ray release will have extra-exclusive content only available on the Blu-ray release, such as several extended episodes seen for the first time and additional audio commentaries!

Also, if you’re a collector of the special “Walking Dead” packaging, this upcoming release will have a limited edition Blu-ray limited edition “Tree Walker” package, designed by McFarlane Toys. If you love the other packaging–season two’s “Walker Head” and season 3’s “Walker Aquarium,” you’ll have to get this to add to your walker collection.

Here’s the synopsis for the fourth season of “The Walking Dead.”

“Based on the comic book series written by Robert Kirkman and published by Image Comics, AMC’s “The Walking Dead” enjoyed its most popular season to date, averaging 13.3 million live/same day viewers per episode and 8.6 million adults 18-49. Whether evading walkers, resisting a super flu outbreak, escaping the fall of their temporary prison haven and desperately searching for a sanctuary called Terminus, the on-going story of a group of survivors under the protective watch and leadership of Rick Grimes (Andrew Lincoln) and Dr. Herschel Greene (Scott Wilson) continues to capture viewers’ imaginations on a global scale.”

The fifth season of “The Walking Dead” premieres on AMC this October. 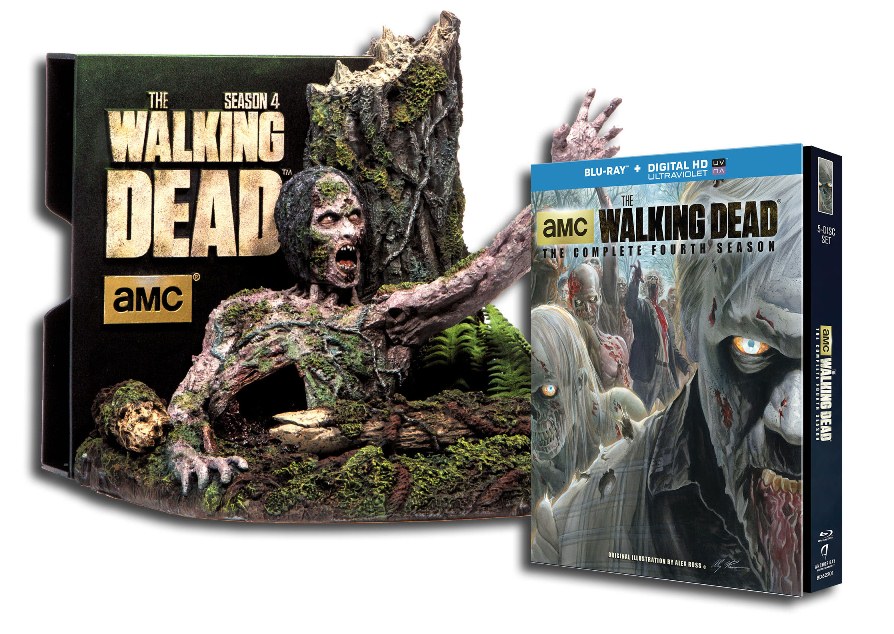