In the highly anticipated sequel, which was inspired by Steve Harvey’s best-selling book ‘Act Like a Lady, Think Like A Man,’ all the couples are back for a wedding in Las Vegas. Tim Story renews his collaboration with many of his darling actors, without failing to carry with him the coarse and tawdry humour of his previous flick, ‘Ride Along.’

The film – which opens 2014’s American Black Film Festival in New York – is a multi-plot story, where stereotypical characters, live stereotypical circumstances, that draw to stereotypical happy endings. This sequel brings together the same couples from the original film. This time, instead of focusing on the highs and lows of relationships, the group heads to Las Vegas for the wedding of Michael (Terrence Jenkins) and Candace (Regina Hall). But plans for a romantic weekend will expectedly falter when their various misadventures get them into various situations that threaten to derail the big event.

Whilst in the prequel we had the chance of seeing the genders interacting  and confronting each other, this time we see them allying on opposing sides: Bachelor party versus the Bachelorette night out. Both somehow depict the squalor that often is connected to the Stags’ & Hens’ night, but what could have been the starting point of an amusing sociological satire collapses into a tacky show.

The nearly complete lack of laughs in ‘Think Like a Man Too’ is reason enough to suggest that the production filmed in Las Vegas should have stayed in Las Vegas and that Tim Story’s last gamble is most certainly an epic fail. 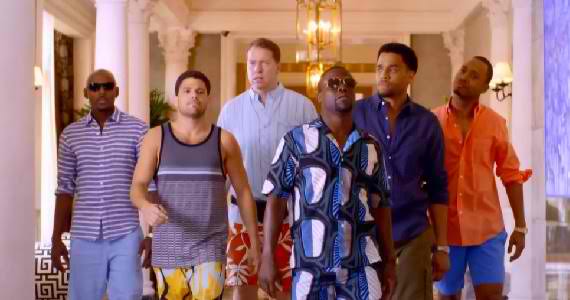