Title: They Came Together

Romantic comedies are so predictable, following the usual arc Boy Meets Girl, Boy Loses Girl, Boy Wins Girl, that they almost parody themselves.  But if you are so in love with rom-coms that you overlook their derivative nature, David Wain comes along to satirize the genre, using repetitions, double-entendere’s (like the very title “They Came Together”), impossible sexual stuntmanship, and deliberately insipid conversations.  It doesn’t hurt that he has Paul Rudd and Amy Poehler as his principals, going on first dates, building their relationship, tentatively breaking up, getting together again.  Never mind that Rudd in real life is 45 years old and Poehler is 42: they give middle-aged people the hope of starting again, acting almost like kids.  If you’ve seen David Wain’s 2001 feature “Wet Hot American Summer,” set on the last day of camp in 1981, you know the director’s style.  And you’re not surprised that he continues to employ Rudd and Poehler’s comic charms.

The movie is framed by dinner in a New York restaurant.  Joel (Paul Rudd) and Molly (Amy Poehler) entertain friends Kyle (Bill Hader) and Karen (Ellie Kemper), describing how they met, how they fell apart, and how they got together…no holds barred, not even the story of a guy who had a fit of diarrhea at a Halloween Party and tried to blame the distress on someone else.  As they recount their tale, they trot out the usual Hollywood clichés: meeting cute, being “set up” by friends, being introduced to strange parents (in this case to a pair of white supremacists), cold feet at wedding ceremonies, rushes to the wedding hall in a desperate attempt to arrive before the vows are completed.

Amy Poehler performs in the role of the owner of a small candy shop on Manhattan’s Upper West Side with the cutesy name Upper Sweet Side.  By contrast, though Paul Rudd’s Joel may be in the candy business himself, but as a man whom Molly calls a corporate robot, an exec with Candy Systems & Research, which threatens to wipe out the small store.  Though they fail to hit off at a party, they are more successful at the Strand Book Store, where they realize that they have in common that both like “fiction books.”

In addition to the aforementioned diarrhea gag, Wain goes Apatow in introducing a snobbish French waiter who literally has a stick up his butt.  The film is graced by a number of talented comics to support the parody, particularly the group of corporate execs, but for the most part it comes across as a series of Saturday Night Live type sketches.  The film has the look of something shot on the fly, but when it works, its sketches are quite amusing indeed. 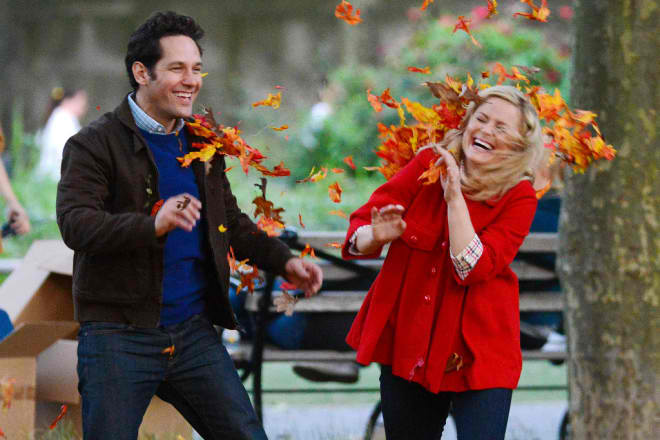