Joon-ho Bong’s unprecedented combination of stunning combat, stylistic eccentricities and dramatic poignancy is so rich and enthralling, there’s no way one viewing of “Snowpiercer” will ever be enough.

In an effort to thwart global warming, a chemical called CW-7 is released into the Earth’s atmosphere in 2014. Soon thereafter, the temperature plummets and the world is consumed by snow and ice. “Snowpiercer” begins in 2031, 17 years after the only survivors entered Wilford’s self-contained safe haven, a train that circles the globe once every calendar year and is sustained by a perpetual-motion engine. On that train, passengers are separated by class. The wealthy indulge in parties, fancy clothing and sushi up front while the rest are secluded to the tail, forced to live in tiny compartments and live off of unappetizing protein blocks. However, the time for change has come and Curtis (Chris Evans) has a plan to take over the front.

“Snowpiercer” is a downright mesmerizing display of hardship, combat and magnificent environments. Bong does an exceptional job developing the world, every member of the cast delivers a wholehearted performance and cinematographer Kyung-pyo Hong churns out one exceptionally picturesque and telling shot after the next. There are some plot holes and believability issues in the mix, but everything else bears such an all-consuming quality that it’s nearly impossible to pull yourself out of the film long enough to assess those issues, keeping them from effecting the overall experience.

The class warfare allegory is heavy-handed, but the film’s bold and highly unique tone and style have absolutely no trouble supporting it, making everything that happens in “Snowpiercer” feel natural in context. It also helps that Curtis and the rest of the tail section passengers are quite easy to get behind. There’s little to no lighthearted material in the film, very minimal displays of affection and even fewer smiles, but it’s still abundantly clear that the tail section is filled with good people who deserve better.

Curtis is quite stoic and will put just about anything or anyone on the line to get closer to the head of the train, but Evans lets just enough empathy and emotion slip through to convince you that underneath his harsh exterior, there’s a man who deeply cares about each and every person in his section. Of those individuals under Curtis’ command, Jamie Bell’s Edgar and Octavia Spencer’s Tanya are the standouts. Edgar is Curtis’ closest friend, but also a little brother of sorts. Edgar is loyal to Curtis through and through, and passionately obeys every command he gives, yet Curtis rarely acknowledges it and that behavior pairs beautifully with their backstory. As for Spencer, per usual, no matter what she’s doing, her magnetizing presence pulls you right in. She does get a nice chunk of time in the spotlight, but even when she’s just part of the pack, you’re always well aware of where Tanya is, what she’s fighting for and her relentless drive to get it.

On the other side of this war, Tilda Swinton dominates as Mason, a liaison of sorts who frequents the tail section to ensure its inhabitants keep their place and maintain order on the train. Swinton’s ability to lose herself in a character is absolutely astounding. She gives Mason this distinct gait, posture, voice and array of facial expressions that make her unlike anything you’ve ever seen before, and it’s incredibly riveting. Mason is a despicable person, but between her ability to manipulate and Swinton’s sky-high entertainment value in the role, it can be hard not to root for her to carry on just for the sake of getting to see more of her.

The only noticeably weak character is Vlad Ivanov’s Franco the Elder. He does facilitate a few vicious action sequences, but he’s still a rather unsatisfying adversary because it can be tough to get ahold of what he’s fighting for. At first he comes across as a henchman who’s sole purpose is protecting the front section passengers, but then it becomes clear that his top priority is killing Curtis and co. and he’s going to make that happen even if he’s got to sacrifice the train itself and the passengers in the process. Without spoiling anything, there is something that sparks Franco the Elder’s unyielding drive to kill, but if you’re not paying close attention, it is something that could pass you by and even for those that do catch it, it isn’t prominent enough to have the effect the scenario deserves.

No matter how you feel about Franco the Elder, the guy does drive one particularly wicked battle in the train’s sauna car. The steam and silence create a remarkably eerie environment, and then the action is choreographed in such a precise, clear way, that you can literally recall what every single good guy does to try to win the fight. On the other end of the spectrum, we’ve got this sequence where Curtis and the gang take on a seemingly endless brigade of axe-wielding masked men. There’s a lot going so it’s impossible to keep track of it all like the sauna scene, but it winds up serving that moment well. At first, it’s a wonder there’s enough standing space for everyone trying to get in on the action in that car, but in the end, that’s certainly not the case, giving you a disturbingly clear representation of all the death that happened in the last few minutes.

“Snowpiercer” isn’t some rip-roaring thriller that’ll get your adrenaline pumping for a bit and then let you move on with your life. The deplorable treatment of the tail section passengers will stick with, you’ll be obsessively racking your brain trying to pinpoint your favorite sequence or shot and you’ll be desperate to see it again because it’s absolutely impossible to absorb everything “Snowpiercer” has to offer in one shot. This isn’t just a film that deserves to be seen; it deserves multiple viewings, to be studied, honored and for big budget blockbusters to at least try to emulate a fraction of the texture Bong achieves in this movie. 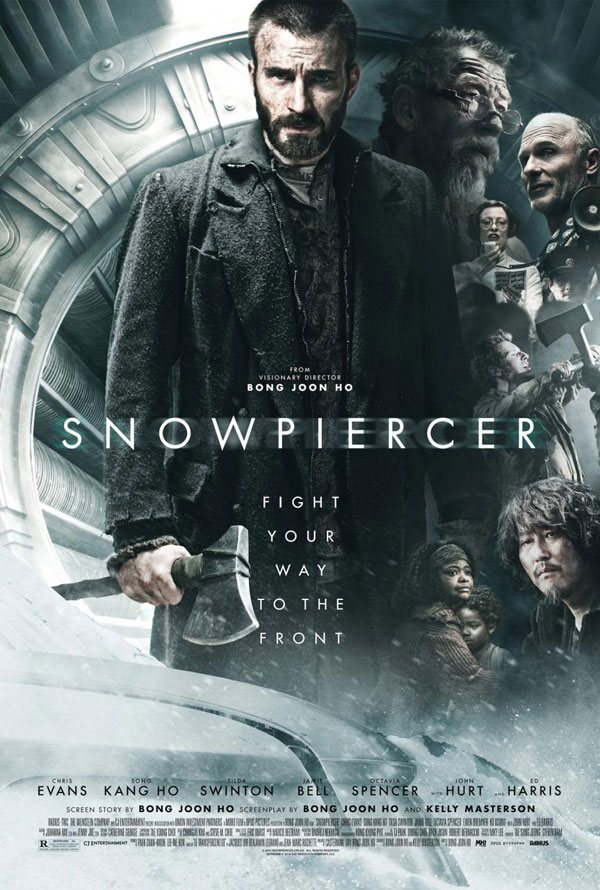