At one point, a “Transformers: Age of Extinction” character delivers this gem – “I also have a saying; I don’t care.” Why isn’t that the tagline of this movie? Or the whole “Transformers” film franchise for that matter?

“Age of Extinction” takes place five years after “Dark of the Moon.” Even though the Autobots helped save mankind in Chicago, the US government classifies all Transformers as dangerous fugitives, forcing the Autobots to go into hiding. Meanwhile, Cade Yeager (Mark Wahlberg) is desperately trying to earn enough money to keep his home and send his daughter, Tessa (Nicola Peltz), to college. Trouble is, none of his inventions work very well and he doesn’t make much money fixing CD players and other random things. However, a dilapidated truck Cade gets his hands on is another story because it isn’t just a truck in need of fixing; it’s Optimus Prime.

This part of “Age of Extinction” isn’t all that bad. The idea of the government shunning the Autobots for helping us win a battle we never could have won on our own is a little ridiculous, but it’s well worth the fun of getting the chance to discover the Transformers all over again. The human characters involved in that discovery, however, are so devastatingly poorly written, they almost extinguish the thrill of the Autobot reunion.

Wahlberg can get away with just about anything simply because he’s got that undeniable Mark Wahlberg charm, but that’s definitely not the case for poor Nicola Peltz. Between “The Last Airbender” and this, she’s got quite the hole to climb out of. Granted, her character in “Age of Extinction” isn’t all her fault. Tessa is your quintessential Michael Bay female lead – she’s there’s to look pretty, act helpless, show a little skin and let Bay introduce her from the feet up. She’s pathetic, bland and doesn’t have a single unique quality to her. This may sound like a script problem, but when Peltz is right alongside Wahlberg, it’s hard not to put some of the blame on her work as well. If he can give his all-too-familiar character so much color and make Cade his own, why can’t Peltz do that, too?

There’s also a storyline involving Tessa’s brainless, jerk of a boyfriend, Shane (Jack Reynor). Of course, Cade doesn’t want a guy messing around with his little girl, so he gives Shane a tough time, but, rather than prove himself to Cade and make the audience like him in the process, Shane outright says there’s nothing Cade can do about their relationship and rubs it in his face time and time again. Even when Tessa’s life is at stake, Shane still has to have his moment and tell Cade, “I’m not going in there to save your daughter. You’re going in there to save my girlfriend.” How are we supposed to get behind that?

Now let’s try to break down the “Transformers: Age of Extinction” evil entities. First there’s this secret CIA unit lead by Kelsey Grammer. He’s determined to find and wipe out the remaining Transformers so teams up with Lockdown, a Transformer who hangs out in space, to take them all out. There is some talk about the creators of the Transformers and how Lockdown is involved, but it’s purely expositional and isn’t woven into the story very well, making it completely forgettable and, in turn, making Lockdown’s agenda impossible to follow. We’ve also got Stanley Tucci’s character, Joshua. He’s the head of KSI (Kinetic Solutions Incorporated) and thanks to the discovery of what the Transformers are made of, Transformium (yes, Transformium), he’s busy manufacturing his own Transformers with Galvatron at the helm. There are strong ideas behind each and every one of these villains, but you can’t expect it to go anywhere when the movie’s got four main adversaries, all of whom require a significant amount of backstory and character development.

And that’s a major problem for “Transformers: Age of Extinction” overall; there’s just too much going on. Sure, that’s probably why the movie clocks in at 165 minutes, but there’s just so much movie someone can handle in one sitting – especially when the script is so poorly structured. It all becomes a robot-on-robot battle blur. There are also loads of stunning visuals and digital components, but it’s impossible to appreciate them when the movie is going a mile a minute. Just look at all the plot we’ve already talked about and we haven’t even touched on the Dinobots.

The “Transformers” franchise absolutely crushes it at the box office, so it’s hard to imagine Bay parting with something that works from a financial perspective, but if he’d just slow down and keep the focus on a select few promising components, he could have a box office hit that’s actually a decent film, too. You’d think narrowing his focus would make his job easier! But sadly, what we get here is the work of a man who needs to do everything in excess – lengthy epic battles, an abundance of sunsets, an absurd amount of low angle shots, painfully blatant product placement, pyrotechnics overload, female leads in pristine all-white outfits and well over two hours of CGI porn. It’s tiresome, dizzying and completely ruins the very few halfway decent elements the film does have. 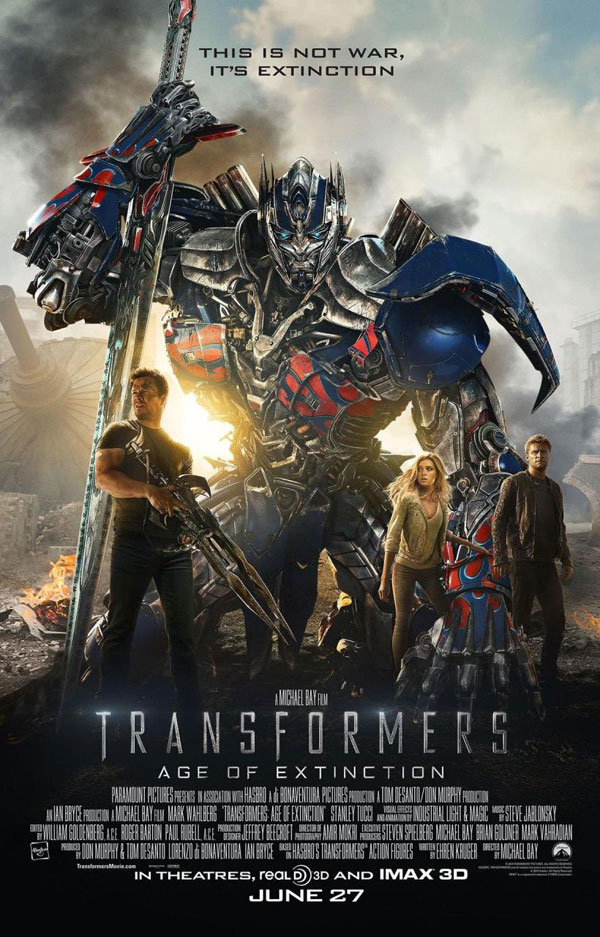