Check Out the Release Date and Trailer for Jimi: All Is By My Side

Get ready to see André Benjamin in your local theater! “Jimi: All Is By My Side” will be distributed to theaters by XLrator Media Sept. 26. Apart from Benjamin, the cast includes Hayley Atwell, Imogen Poots, Andrew Buckley, Ruth Negga. The film is written and directed by John Ridley, the writer behind the Oscar-winning “12 Years A Slave.”

The film focuses on Jimi Hendrix in his early career. Hendrix is in Britain, trying to make a name for himself in London.

“OutKast’s André Benjamin stars as Jimi Hendrix in this revealing biopic from Academy Award-winning writer-director John Ridley (12 Years A Slave). Covering a year in Hendrix’s life from 1966-67 as an unknown backup guitarist playing New York’s Cheetah Club to making his mark in London’s music scene up until his Monterey Pop triumph, the film presents an intimate portrait of the sensitive young musician on the verge of becoming a rock legend.”

Be prepared before going to see this film, though–don’t expect to hear Jimi Hendrix’s original music. You’ll hear some covers he performed, but no “Purple Haze” or any of his big time hits. The Hendrix estate wouldn’t allow for his music to be used in the film.

You can see the trailer for the film below the post. What do you think about “Jimi: All Is By My Side”? Discuss the film in the comments section below. 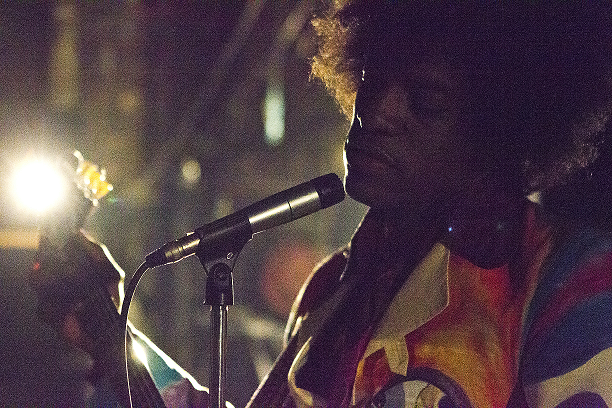