Dawn of the Planet of the Apes: What the Critics Are Saying

The critics are fawning over “Dawn of the Planet of the Apes,” but it’s not without good reason. The film is similar to its 2011 installment “Rise of the Planet of the Apes” in that it has flown under the “development watch” radar while everyone else has been raving about who is playing what in “Batman v. Superman: Dawn of Justice,” the next “Avengers” film, and other big superhero movies. Also, like “Rise,” “Dawn” is surprising critics once again with its fantastic story, amazing visuals and spectacular acting.

The film hasn’t even been released to the theaters yet for the public’s consumption, but the film already has a 95 percent fresh rating from Rotten Tomatoes. The main critical consensus is that the film tops “Rise”–already a great film–by leaps and bounds.

“In the annals of sequels, ‘Dawn’ is to ‘Rise of the Planet of the Apes’ what ‘The Empire Strikes Back’ was to ‘Star Wars’–it’s that much better,” wrote Todd McCarthy for The Hollywood Reporter. He also called the film “gripping,” saying that the film “manages to do at least three things exceptionally well that are hard enough to pull off individually: Maintain a simmering level of tension without letup for two hours, seriously improve on a very good first entry in a franchise and produce a powerful humanistic statement using a significantly simian cast of characters.”

“With most of the below-the-line talent new to the francise, ‘Dawn’ has an aesthetic entirely distinct from that of ‘Rise,’ with Michael Seresin’s antsy camerawork painting from a strikingly dank palette, and Michael Giacchino’s chorally embellished score occasionally evoking the grandeur of Howard Shore’s work on the ‘Lord of the Rings’ trilogy,” wrote Guy Lodge for Variety. He also praised Andy Serkis and Toby Kebbell, who portray Caesar and Koba, respectively. “Serkis must now be used to the superlatives heaped upn his agile fusion of performance and image in many a CGI spectacle, though he’s ain particularly empathetic, emotionally specific form here[,]” he wrote. “Kebbell’s brute physicality and wild-eyed animosity, meanwhile, burns through the digital disguise.”

The film will be out July 11, so you’ll be able to judge the film for yourself. 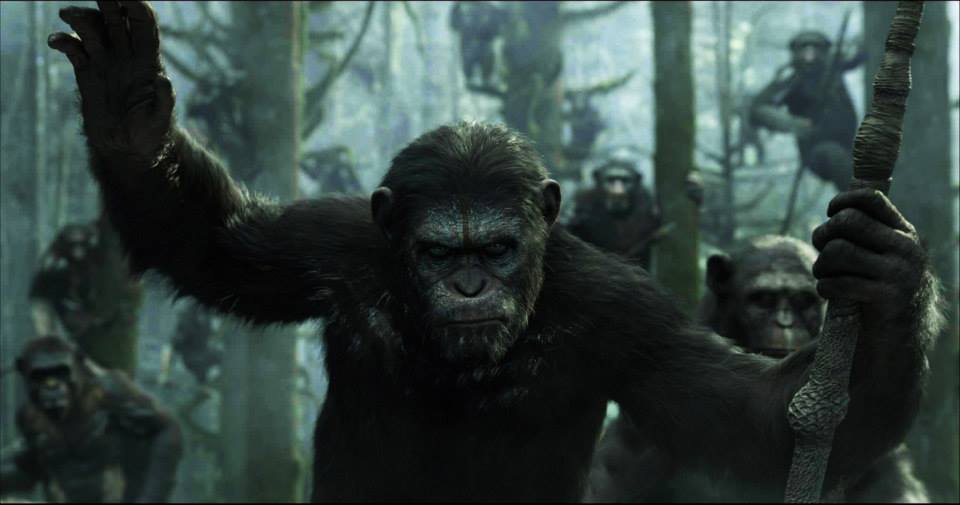