January 4th 2008,  Chris Copeland and his father were out hunting in the woods where Chris captured his father on video being attacked and taken by a large creature. The only thing left behind was blood, his father’s rifle and a very large footprint. Five years later Chris brings a camera crew, along with his girlfriend to the town surrounding the event. They interview townsfolk and gather similar stories of seeing a large creature, and meet a strange hermit in the woods who claims to have had several encounters with the creature and tells them there are several. Chris, his girlfriend Hannah and the crew proceed to venture deep into the woods and seek out the creature or creatures and kill them.

The Good: Better story and acting than The Blair Witch Project.  The night vision camera was clever. The sound effects of the creature was good; I liked the scenes towards the end where it sounds like it was eating someone.

The Bad: It’s still the Blair Witch Project. The same annoying shaky cam. The same bit where the lead goes mad and prevents the others from leaving. The girlfriend is an annoying screamer. There’s a few scenes where there are some bad acting, especially when the actors are trying to look intense and scared. The translation of the sasquatch speak was just dumb. We’re supposed to believe they’re highly intelligent, bitch please.

These “found footage” films keep coming out, and people keep watching them so I don’t think they’re going away any time soon. I feel the genre is getting really tired. I found this film to be enjoyable enough. The story was different, but there are too many recycled scenes and characters; mainly just a bunch of dumbass white kids. 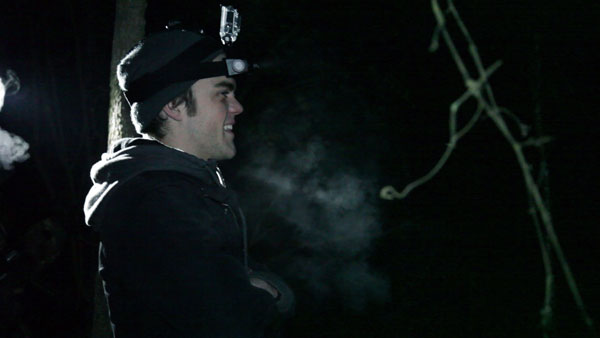