While watching “The Purge: Anarchy,” those of us of a certain age may think back to their childhood, perhaps at a time before Disneyland and Disneyworld, when you were grateful to take a few minutes on Coney Island’s Ghost ride.  For twenty cents (this was in 1951 when I was privileged to sit on a rickety car), you travel a winding path through a dark tunnel.  Every few seconds, things that go bump in the night would lunge toward you. First a skeleton would virtually wrap his arms around your neck.  You pull back.  Then a figure that looks like a prequel to the Freddy Kruger series would make a murderous laugh.  When you finish your two dimes’ worth, you were hardly shaking with fear.  In fact, you were laughing to think that anyone would be terrified.  The ghost ride was used more by teen agers looking to make out in the dark for a few minutes when such activity was considered risqué in the fifties.

Such is the nature of James DeMonaco’s feature, following up the financially successful but critically dismissed movie which starred Ethan Hawke. This time around, Mr. Hawke makes no appearance, leading to guesses as to whether he was asked and refused.  You watch a bunch of big, masked kids on the screen who look cute rather than frightening—one guy whose face is completely covered with the word “God” written across the forehead (go figure), another with a baseball cap who peers through a machine gun on a stand in the back of a truck, yet another group, rich people like the ones in Eli Roth’s “Hostel 2” who are given the right to hunt down ordinary people and kill them for an audience of the one percent.  You might smile, or even laugh at the absurdity.

The theme of the purge is that for twelve hours, once a year, the proto-fascist government of the U.S. in the year 2023 lets loose the dogs of war to…hmmm…from what I get either to reduce the population or to cleanse the emotions, thereby allowing the country to be relatively free from crime the rest of the year.  During those twelve hours, you can commit any crime you’d like.  No medical help, no fire engines.  Never mind that psychologists now agree that releasing aggressions does not purge you of your hostility: it merely makes you even more fiercely aggressive afterwards.

The hapless victims on writer-director James DeMonaco’s view include a couple about to separate whose car runs out of gas shortly before the purge hour begins, and a mother and daughter who have been pulled out of their residence for purging.  The foursome are repeatedly brought to the brink of extinction but are regularly saved by handsome, muscular Leo Barnes, aka Sergeant (Frank Grillo), who is up to no good himself—or to a worthy cause depending on what you think of revenge.  Barnes, armed to the teeth, seeks justice for the murder of his boy twelve months earlier (who says you can get away with murder, even if you commit it during the Purge?).  What follows is a series of predictable shootouts, the usual sound and fury meaning nothing, and a script that never rises above the banal.

Two young women leaving the theater remarked that they “can’t wait” until next year’s sequel, and who can doubt that there will be one considering that the first entry cost $3 million and raised $89 million at the box office? 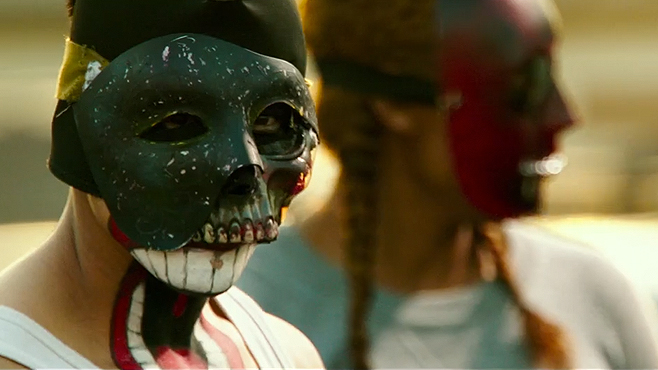