Embarking on a powerful journey to fulfill your destiny and dreams, particularly when at times it can be filled with unpredictable struggles and people who are determined to prevent you from achieving your goals, can be a seemingly harrowing and daunting experience. That initially intimidating process of achieving your ambitions is powerfully showcased in the journey of the title character in the new animated family film, ‘Justin and the Knights of Valour,’ which is now available on Blu-ray and DVD. Accomplished and talented young actor Freddie Highmore, who voices Justin in the film, impressively infused the character with a powerful ambition to become a knight, despite the fact they have been banned by the queen, and his dream goes against his father’s wishes.

‘Justin and the Knights of Valour,’ which was co-written and directed by Manuel Sicilia, follows young Justin as he dreams of following in his grandfather Sir Roland’s footsteps and becoming one of the legendary Knights of Valor. His goal goes against the hopes of his father, Reginald (Alfred Molina), the chief counsel to the Queen (Olivia Williams), as he wants his son to follow in his footsteps and become a lawyer. But determined to achieve his goal, Justin goes against his father and sets out on his quest. Along the way, he encounters a slew of quirky characters, including the beautiful Talia (Saoirse Ronan) and handsome Sir Clorex (Antonio Banderas), who try to teach Justin the skills he needs to become a mighty knight. Justin is put to the test when he is forced to face a power-hungry army of thugs, led by the mighty Sota (Rupert Everett), but soon learns that true strength comes from the heart.

While Highmore has embraced his exploration into more mature and serious topics on his hit A&E horror mystery series, ‘Bates Motel,’ he still greatly appreciates the opportunity to make family-driven and animated films like ‘Justin and the Knights of Valour.’ “The genre doesn’t matter as much to me as a film’s story and message,” said the Satellite Award-nominated actor, who was recognized this year with a bid for Best Actor–Television Series Drama for the thriller series.

Highmore is supportive of the message that everyone can follow their dreams that Sicilia powerfully infused into the script of ‘Justin and the Knights of Valour.’ The actor feels that the film’s intended audience-family and children-“can relate to Justin’s determination to become a knight,” even though his father wants him to follow in his career path. The actor also agreed with the writer-director’s decision that “Justin isn’t the obvious hero, and isn’t anyone’s first pick to become a knight, but he still persevered in following his dreams.”

The young performer, who has embraced the importance of continuing his education while balancing it with his acting career, voiced his lines for Justin two years ago, when time permitted in his school schedule. Highmore recorded his scenes for ‘Justin and the Knights of Valour,’ which was produced by Banderas’ Spanish production company, Green Moon, while studying abroad in Madrid. Highmore, who studied languages while in college, including Spanish, felt making the animated film in Spain infused the story with a subtle European look, which helped give the film a powerful new feeling.

Highmore also embraced the distinctness of filming ‘Justin and the Knights of Valour’ alone in a recording studio. “Unlike with live action films, in which you can play off the other actors, I was the first to record my lines. So I didn’t have the opportunity to work with my co-stars on the set,” the performer said. Since he was the first actor to go into the studio, he reveled in the fact that he could use many of his ideas on where he thought the story should be headed, and guided the direction where he believed the scenes should go. He also enjoyed having the responsibility of having his voice available for the other stars to respond to.

But Highmore also worried his co-stars may not have held the same ideas for the overall movie as he did, and wouldn’t react in the way he envisioned. The actor’s concerns were eased, however, as “At the end of the recording and animation process, when all the dialogue was recorded and the drawings were completed, I was able to go back into the studio and rerecord some of my lines. That way I was better able to react to the other actors’ choices during some of the bigger and more important scenes,” he said. Highmore also praised his co-stars’ interpretations of their characters. He noted he enjoyed Ronan’s portrayal of Talia as a feisty heroine, and David Williams’ decision to play Melquiades, the supreme sorcerer and master of the magical arts, as a kind-hearted wizard, despite the character’s split personality.

Despite learning to embrace the isolated nature of recording his lines for Justin and his other animated characters on his own, Highmore also enjoys the close interaction and interaction he has with his co-stars on his live action projects. Highmore noted that while some performers mainly focus on which actors they’d like to work with on future projects, he embraces the current working relationships he has built.

Highmore is eager to continue working with the co-stars he’s presently filming with, particularly on ‘Bates Motel.’ The actor has built a strong rapport with the show’s other main star, Vera Farmiga, who plays Norma Louise, the mother of his character, Norman. The drama’s “cast has become so close during shooting, we’re a family now. I’m excited to bring the show to Comic Con this weekend,” he added.

Details about Season 3 of ‘Bates Motel,’ which will debut next year, will be revealed during a panel at this week’s San Diego Comic Con. The discussion, which will be moderated by Dan Snierson from Entertainment Weekly, will take place on Friday (July 25) from 3:30-4:30 p.m. in Room 6A. Besides Highmore and Farmiga, stars Olivia Cooke and Nestor Carbonell will also be in attendance.

The opportunity to bring such a beloved character like Norman Bates, as well as other well-known protagonists, including Charlie Bucket in the 2005 remake, ‘Charlie and the Chocolate Factory,’ is an exciting prospect for the 22-year-old actor. Highmore noted that he thrives on bringing a unique and contemporary take to beloved characters. But he also enjoys bringing new characters, such as Justin, to life, and bring his own creative insight into their journeys.

While the versatile actor humbly expressed his appreciate for the film opportunities he’s been granted throughout his career, Highmore also revealed his enjoyment acting on a series like ‘Bates Motel.’ “I enjoy working on a television series because I have the time to truly explore and develop my character, like with Norman,” he said. The actor also expressed his appreciation for the diverse range of storylines and character development the writers offer him on the set of the series.

Highmore is a resourceful, talented young performer who has undoubtedly proved his acting ability through the diverse and captivating roles he has chosen throughout his career. Whether he’s voicing an optimistic protagonist like the title character in the family film, ‘Justin and the Knights of Valour,’ who’s not afraid to go after his dreams, or he’s portraying an emotionally struggling young man like Norman Bates in the hit series, ‘Bates Motel,’ the actor has powerfully proved his versatility. Not only is Highmore notable for truly considering and exploring the motivations and emotions that drive his characters, he is also a powerful actor for appreciating his bonds with his co-stars, and understanding how his actions influence their reactions to him. Much like Justin in the animated film, the actor’s dedication to his true calling and passion in his professional life proves he has a promising future in his chosen profession. 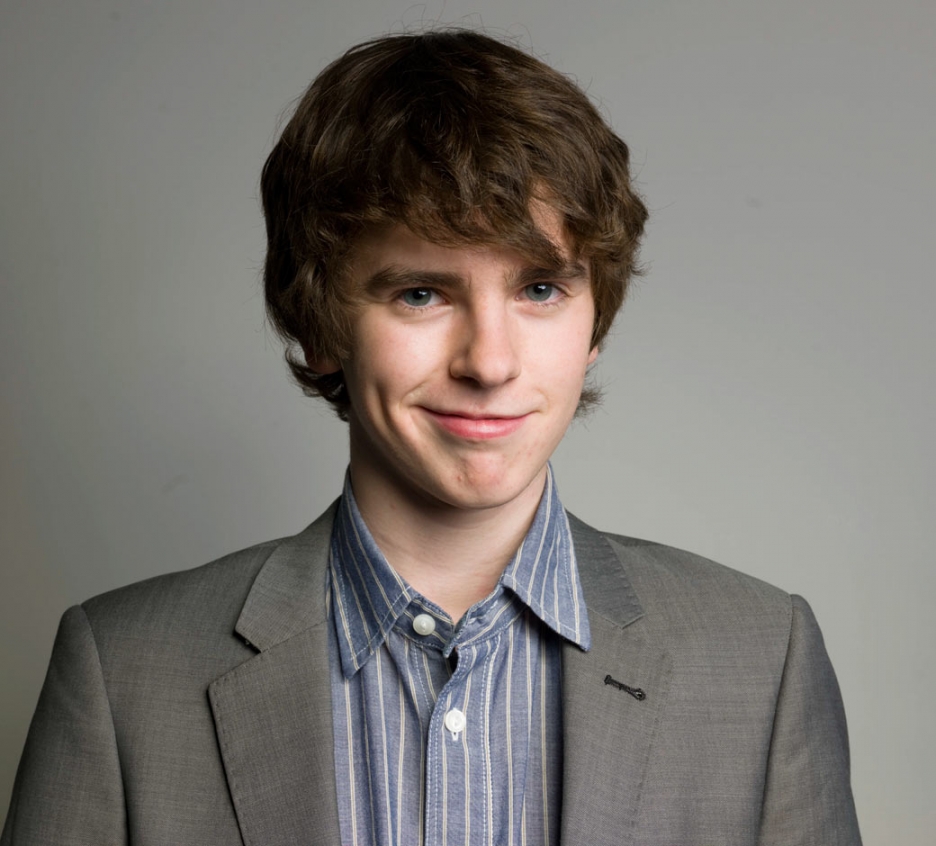