The “Teenage Mutant Ninja Turtles” franchise and hip-hop have had a close, close bond. Well, to be honest, it’s close but also somewhat contentious–some would argue that Vanilla Ice single-handedly ruined the franchise with “Ninja Rap.” But we’ve got hip-hop joining forces with the turtles once again in this clip from the film.

In the clip, which originally premiered on Yahoo, you’ll see the teenage turtles running right into the middle of some henchmen before escaping by getting into the elevator. On the long elevator ride up to take on Shredder, the turtles make use of the time to beatbox. The results are below.

“Teenage Mutant Ninja Turtles” is directed by Michael Bay and stars Megan Fox, Will Arnett and Whoopi Goldberg. The film will be in theaters Aug. 8. Here’s more abou the film.

“The city needs heroes. Darkness has settled over New York City as Shredder and his evil Foot Clan have an iron grip on everything from the police to the politicians. The future is grim until four unlikely outcast brothers rise from the sewers and discover their destiny as Teenage Mutant Ninja Turtles. The Turtles must work with fearless reporter April O’Neil (Megan Fox) and her wise-cracking cameraman Vern Fenwick (Will Arnett) to save the city and unravel Shredder’s diabolical plan.” 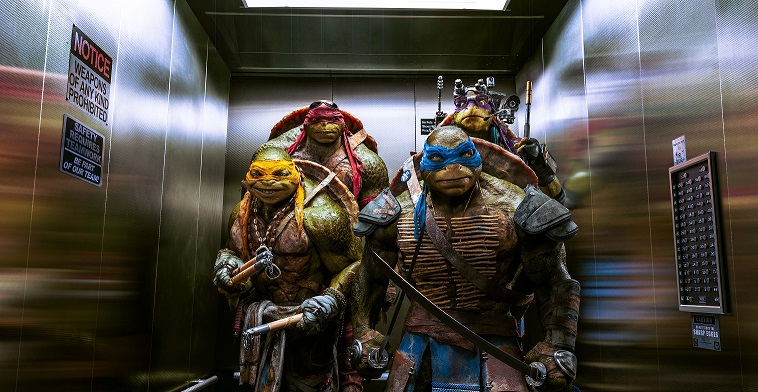