Mike Tyson, former heavyweight boxing champion of the world, has thrown his hat into the ring with Adult Swim to take on what might be the most unexpected challenge of his career, to become a cartoon star. Mike Tyson plays himself in his new Show Mike Tyson Mysteries where he takes on detective cases delivered to him by carrier pigeon and is accompanied on his adventures by a foppish ghost (Voiced by Community‘s Jim Rash), a Korean step-daughter (Voiced by Rachel Ramras), and a sass-talking Pigeon (Voiced by Norm MacDonald). On the path to answers they encounter everything from El Chupacabra, to dinosaurs and astronauts. Each action packed episode Tyson and team will travel to exotic locations like the bottom of the sea, or the airport. Tyson is apparently a huge cartoon fan with a particular fondness from his childhood for Hanna Barbera and came to the network with the idea for the show himself.

Seated with an official Comic-Con signature over-sized back-sack slung over his shoulders Tyson took a moment to shed some light on the mysteries of the show. He discusses his character, expanding his horizons, pigeon raising and the poignant reasons behind his fondness for them, Karaoke, his Broadway aspirations, and even Silence of the Lambs.

Will this prove to be a winning formula for a knock out hit show? For more hints on what to expect you’ll have to wait. Mike Tyson Mysteries is coming to Adult Swim this Fall. 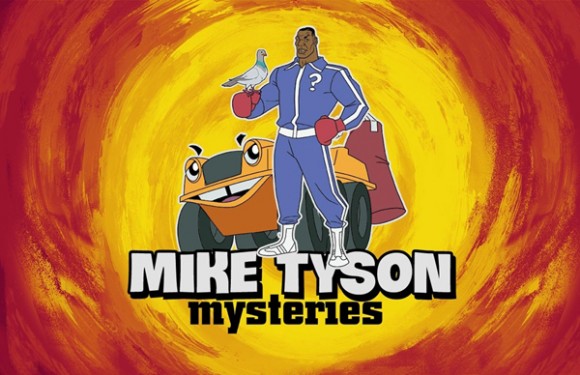