You may not know Tohoru Massamune, but you’ve seen him. From bit parts in Inception, 24, and Heroes, Mr. Massamune finally has his breakout role in Teenage Mutant Ninja Turtles as Shredder. Few can say they’ve landed a big role, and even fewer have landed such an iconic character beloved by many around the world.

I was fortunate enough to talk with Mr. Massamune on philosophy, life, and bringing his own spin to a classic character.

How does it feel to have an action figure?

It’s crazy. It’s one of those things that I’m going to wait until I wrap my head around it. I’m just enjoying the ride, but yeah, it’s cool to have one.  They were handing them out at the end of the party, and I managed to dig one up so it’s cool. There’s still moments where I feel ‘this is pretty weird,’ but there was a team that put this character together so it feels a little less weird, does that make sense?

You’re playing an icon in Shredder. How did you get this role and how does it feel to play an icon?

I want to keep on going in my acting career, but if for some reason I keeled over, I’d be ok with it! Man, ‘I played Shredder’ would be my last words. That’s pretty awesome! But I didn’t audition for the part. They came to me through a phone call. I’ve been doing this for a while now, decades, but I was hiking and got an e-mail, and the next week they gave me a phone call. I’m just really thankful. It’s been really intense, so it’s been nice to see it up on the screen. I’m just gonna enjoy this one.

There’s been many interpretations of his character, through the comic books and the television show. Did you bring your own style to Shredder?

Absolutely! What was really weird was what I walked in with was what their vision was. This has a really dedicated fanbase, and certainly you don’t want to disappoint them. There was a part of me thinking that I’ll go in there and play it organically, so I was kind of coming from that place. I know there are a lot of versions of Shredder, but I just went in and opened up, and we were on the same page.  We never had a battle, and we came to the same conclusion. I just let it turn into what it was supposed to be, and it turned out to be what they were looking for.

How much of your costume was practical and how much of it was CGI?

The first two scenes are all practical, all old school. I assume there was some processing, but it was all lights, smoke and mirrors. And I’d love to have the fighting skills of the Shredder in the metal, but I left that to the hands of the experts in CGI, and I was in the booth. I was in make-up for three hours, getting my bald head and markings on my face. I would look at myself in the mirror and I was scaring myself. I turned to the make-up artist and I said “So I take it I’m playing a bad guy?” Anything in those first two scenes is all old-school.

You mentioned working in the booth. Was it hard to recreate that emotion as opposed to physically being on-set?

Not at all! The best thing was I didn’t have to recreate a character in my mind, because like you said, there’s been so many interpretations of this character, we’ve known him for decades. I was basically like the kids who play Shredder when they’re seven years old. And once it starts running, it’s actually pretty real. Plus those guys, the Turtles, are really funny. I met them all at the party and it was really great. 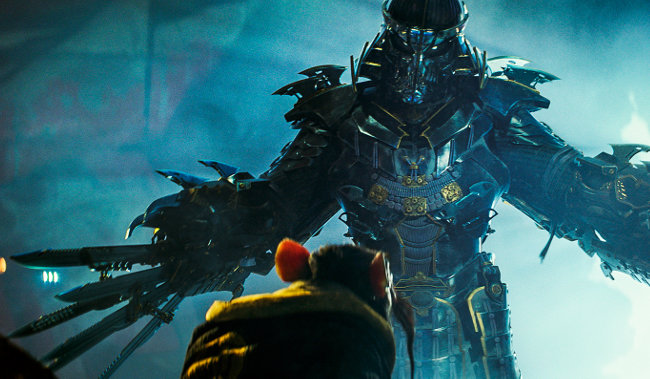