After years of doing romantic comedies and dramas, Brosnan makes an explosive return with ‘The November Man,’ one of the most entertaining action films that 2014 has to offer. Brosnan reteams with director Roger Donaldson, who first worked with Brosnan in the superior volcano film of 1997, ‘Dante’s Peak.’

Donaldson has flown under the radar for many years, but looking at his resume, his films are well known. His experience is on display with ‘The November Man,’ navigating and guiding it’s various plot threads into a cohesive film. Political thrillers are inherently convoluted, but Donaldson is no slouch in this genre. He allows us to go along with it, even with the political jargon that the characters are saying. He’s also smart with his action scenes, and while they may be filmed a little close, he smartly frames the shots to give a sense of what is going on.

Donaldson’s cast is what really makes ‘The November Man’ strong, with Brosnan’s Peter Devereaux being a bonafide badass in the vein of Jack Bauer more than James Bond. It’s as if Brosnan never left the action genre, being cold when he needs to be and slick at the drop of a hat. Few have ever commanded the screen like he could, and hopefully he’ll make more action films from here on out. Oh, and he can still kick ass.

In something of a departure from her previous roles, Olga Kurylenko’s Alice Fournier is a damsel in distress, yet strong when she’s called upon it. Kurylenko is like a fine wine, looking better as the years go by as well as giving it her all. Here, she’s great, never falling into the typical tropes that befall a damsel. When she finally releases her sexual side, Olga owns it and plays it very deadly.

The rest of the supporters are fine with Luke Bracey being entertaingly cold as David Mason, Will Patton showing up briefly, but stole cold as Perry Weinstein, and Eliza Taylor’s Sarah playing a sweetheart. Bill Smitrovich really is the standout, as his Hanley is something of comic relief, and also hiding his dark side.

It may not be perfect, but it was never trying to be. What ‘The November Man’ tries, it succeeds at in spades. While only a handful of action films this year have truly been fun (and even fewer exceeding ‘just being fun’,) that’s what ‘The November Man’ is. It knows it, and is ok with that. It’s a welcome return for Pierce Brosnan to the genre that made him a household name. Let’s just hope he doesn’t take another extended break from action. 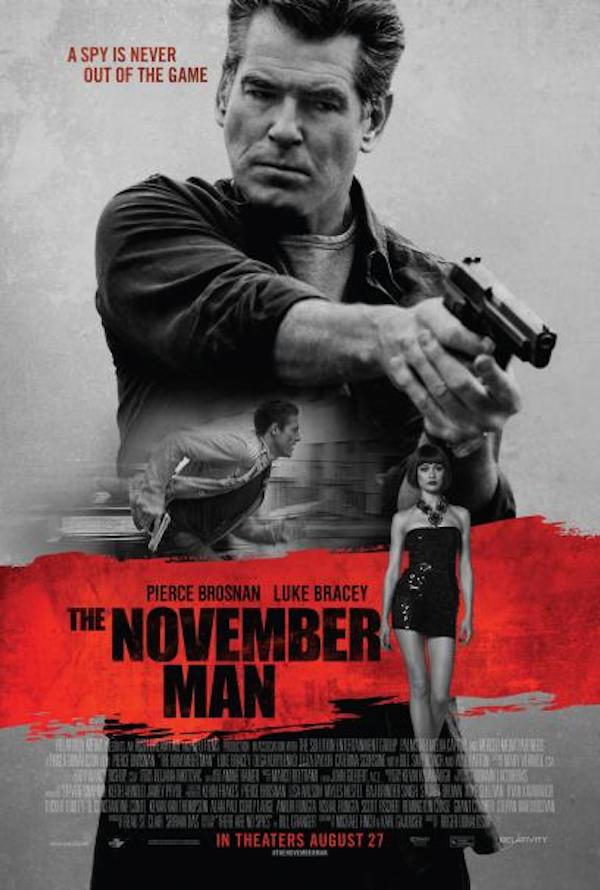