Jenni “Jwoww” Farley from the Jersey Shore “reality” show is credited as executive producer for this comedic horror film about six vapid young women who hook up with five meatball “fist pumpers” and take them back to a New Jersey lake house only to be hunted down by a masked killer.

The Good: Boobs, Ron Jeremy and a dwarf. The Guidos watch a horror movie called “Fat Camp Massacre” which I would gladly watch over this. One kid has to decide: cake or chance to escape. Cake wins.  There was maybe one funny scene where some inept cops try to pull a self defense excuse after killing the wrong man.

The Bad: It’s not a snuff film. None of the actual Jersey Shore douche nozzles get killed in this film. Talk about false advertising. Shenanigans! What a gyp! Total rip-off of Friday The 13th with the masked killer; however when the killer is revealed, he’s a fat sack of crap that these dumbshits could easily out run him, but for the sake of this horror film, they’re also too dumb to let live.  There’s another 13th ripoff in a scene where a couple is having sex and they get speared to the bed.  A rip off of Final Destination 3 where a dude gets cooked in a tanning bed. One of the better gore effects is in a Psycho ripoff scene when one chick gets slashed in a shower.  Jeez why don’t you just throw in a scene where the killer swaps his body with a dead lookalike relative…oh wait.

I didn’t care about any of these assholes, so as the viewer, I was just sitting around waiting for the whole thing to be over rather than root for any of the characters.  Usually there’s a reason for the killer to be killing. Instead we’re just given “It’s a Jersey Thing.” Sounds legit.

Would I recommend this film? I gave the screen the finger once the credit’s rolled. Does that answer your question? 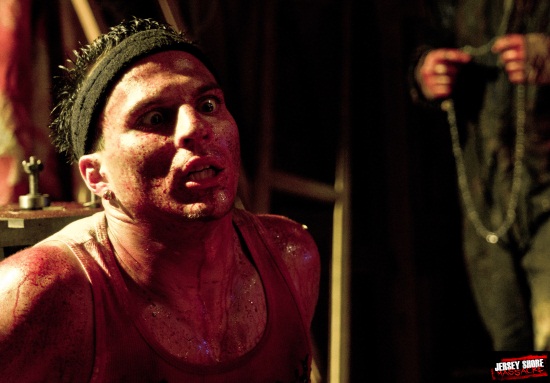