As Above, So Below Movie Review

Title: As Above, So Below

Relying on your thorough experience within a particular subject often leads to capturing the next intriguing story on the topic. Holding that knowledgeable background not only stresses the exploration of one of the most fabled jewels in history by the main character in the new independent found footage horror thriller, ‘As Above, So Below,’ but also helped filmmaker John Erick Dowdle infuse the story with the best physical effects possible. The director, who has previous experience helming films in the genre, including ‘The Poughkeepsie Tapes’ and ‘Quarantine,’ which he also co-wrote with his brother, Drew Dowdle, once again effortlessly captured viewers’ attention with his powerful understanding of horror thrillers.

‘As Above, So Below’ follows University College London professor Scarlett (Perdita Weeks), an archaeology and historical enthusiast who has two doctorate degrees, speaks six languages and is a black belt in Capoeira. Determined to uphold her late father’s legacy, she sets out to find the location of the legendary Philosopher’s Stone, which is fabled to offer eternal life to anyone who has it in their possession. To chronicle her exploration, Scarlett hires cameraman Benji (Edwin Hodge), who will turn her investigation into a documentary. She also finds a former colleague, George (Ben Feldman), and persuades him to help in her quest, as he speaks fluent Aramaic and can help in her research.

During her inquiry, Scarlett uncovers a few clues that lead her to believe the stone is in the Paris catacombs. Much to George’s dismay, she convinces him to accompany her and Benji into the catacombs, which notoriously hold the remains of six million deceased Parisians, who were buried there through the late 19th century. The three Americans need the assistance of locals who are familiar with the massive underground tunnels, so they hire Papillon, Souxie and Zed (Francois Civil, Marion Lambert and Ali Marhyar) to help them. While Scarlett initially believes the location of the Philosopher’s Stone will be easy to find, the group faces collapsing tunnels, claustrophobia, hallucinations and other life-threatening obstacles that threaten not only their sanity, but also their lives.

While Dowdle effortlessly drew on and explored contemporary social and health issues in his powerfully gripping 2008 remake of ‘Quarantine,’ his attempt to detail people’s motivating drive to accumulate fortune and secure eternal life in “As Above, So Below” unfortunately didn’t match his previous writing and directorial effort. The filmmaker’s latest horror thriller set up the premise to showcase a determined, strong female protagonist in Scarlett, who was initially unwavering in her desire to locate the Philosopher’s Stone in the beginning of the movie, and leave her mark on history. But once the brazen character actually entered the catacombs, her indecisive emotions about how to actually conduct the search unfortunately transformed her into a destructive leader who was unable to put her priorities in order and value the safety of her team.

While the majority of the story disappointingly failed to live up to its premise once Scarlett and her team entered the catacombs, the production value of ‘As Above, So Below’ enthralling made up for the lackluster plot. Since the movie was filmed independently, Dowdle didn’t have the budget to build tunnels that replicated the catacombs that lie beneath Paris. The French government allowed the director and his crew to be the first film production team to shoot a movie in the catacombs, which afforded Dowdle the opportunity to utilize the underground to his advantage.

Production designer Louise Marzaroli creatively stylized the diverse passageways with various props, some of which were already in the catacombs, including the skeletons of the deceased who were buried there, during filming. The frightening authentic look of the ruins Scarlett and her colleagues encountered, which also included a disheveled and broken-down piano and a rustic rotary phone, as well as the crushingly small tunnels they were forced to crawl and swim through, provided the feeling that the team truly was continuously creeping closer to their deaths.

Léo Hinstin, who worked on the cinematography for ‘As Above, So Below,’ also cleverly and disturbingly approached the production design of the film with the necessary and chilling found footage element. While Benji was filming a majority of the exploration Scarlett led the team on with a hand-held camera, the rest of the team utilized smaller cameras that were embedded on their flashlights they wore on their heads. Though some of the shots were understandably shaky and unclear, which made it difficult to clearly decipher the action and what was truly happening, Hinstin made the right decision to showcase the experience Scarlett and her cohorts were facing through their eyes.

The found footage element was also smartly utilized as a creative plot element, as Scarlett solely wanted to document her discovery of the Philosopher’s Stone. Since she didn’t want to financially profit off the jewels and stones that were reportedly buried with the stone, and instead prove her father was right in his assertion it was real, having her document the journey was a natural and understandable choice the cinematographer made with Dowdle.

The writing reunion of the Dowdle brothers for ‘As Above, So Below,’ after they scribed ‘The Poughkeepsie Tapes’ and ‘Quarantine’ together, unfortunately failed to capture the same unique insight into the motivations and emotions of the main characters, as well as the social issues that are currently plaguing society. However, the director commendably utilized the privilege of being the first filmmaker to be allowed to shoot in the actual Paris catacombs to add a harrowing feeling and look to Scarlett’s exploration for the Philosopher’s Stone. Marzaroli’s creativity of incorporating the natural location and objects in the catacombs, combined with Hinstin’s effective use of the found footage subgenre, made the horror thriller a prime example of how to best utilize natural locations and intriguing cinematography to tell a frightening story. 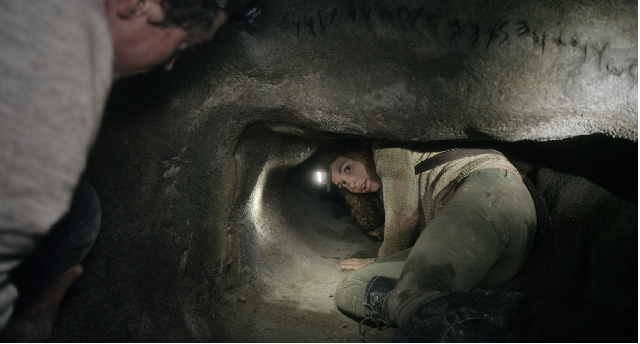