Truly embracing that brief moment after you’ve realized what you want to do with your life, but before it settles into a job, can often be an exciting and liberating time for many young adults who are searching for their identities. The possibilities are endless for those who are filled with enthusiasm and idealistic ideas about what the world should be like, especially when they meet like-minded people who unquestionably share the same opinions and views.

That uncompromising coming-of-age idea is the creative driving force in the new independent romantic movie, ‘God Help the Girl,’ the feature film directorial and writing debuts of Stuart Lee Murdoch, the lead singer and songwriter for the indie pop band Belle & Sebastian. The drama powerfully embodies those strong philosophies many young adults hold as they believe they’ll be happy doing whatever they want, before they realize that not all dreams are as rewarding as they have expected.

‘God Help the Girl’ follows the emotionally struggling Eve (Emily Browning), an Australian songwriter who moved to Glasgow, Scotland in pursuit of her musical dreams. However, she’s unable to contend with the pressures of trying to find success while pursuing her goals, which leads to her staying in a mental-health facility for depression and an eating disorder. When Eve decides to once again to embrace her passion, she sneaks out of the hospital to attend a concert at a local club. While there, she draws the attention of the singer of one of the rock bands, Anton (Pierre Boulanger). But when Eve becomes emotional after the concert, James (Olly Alexander), the English guitarist and singer of the disastrous act that follows, decides to bring her home to his flat and take care of her for the night.

Eve returns to the hospital the following morning, and when she later finishes her treatment, she moves into a spare room in James’ flat. As the two become friends, she pretends she doesn’t realize he’s romantically interested in her. She instead decides to continuously date the narcissistic Anton, in the hopes he’ll give her demo to a pair of radio hosts she frequently listens to, and is known for launching new talent.

As Eve anxiously waits to hear back about her demo, she joins James on his lesson with his music student, Cassie (Hannah Murray). With the help of Cassie’s family’s money, the three decide to form a band together, and slowly begin to garner attention and fans. But even as they gain notoriety in the Glasgow music scene, the trio, particularly Eve and James, increasingly find themselves at odds. As the friends disagree over major aspects of the group and their music, including how to market themselves, what kind of sound they want to convey and even what they should name the band, they realize that pursuing their dreams may not be as satisfying as they once believed.

Murdoch skillfully cast the main roles with rising young actors who naturally related to their characters’ distinct drive to find happiness within their music and personal relationships. Browning passionately portrayed Eve as a strong-willed musician who’s determined to do whatever it takes to achieve her goal of having people hear and appreciate her music. But the actress also powerfully highlighted Eve’s lack of confidence in her ability to form meaningful bonds and realize her full potential.

The absence of Eve’s self-assuredness formed the perfect opportunity for her to fall under the influence of the equally resolute James. Alexander instinctively infused his character with the belief that he wanted to create music that would not only be enjoyed by his audience, but also gain a powerful notoriety and fame that would allow him to leave his mark on history. But his tendency to avoid responsibilities, stay in his comfort zone and not truly pursue what he really wanted, such as a romantic relationship with Eve, took away any plausibility he has in becoming an acclaimed musician.

Between the time Murdoch completed the screenplay and music for ‘God Help the Girl,’ and when he officially cast Browning, Alexander and the rest of the actors for the film, he decided to record an album of the songs with an ensemble of singers. The record was released in mid-2009 to critical acclaim, which put a pressure of the actors to emotionally and skillfully record the same songs for the film. The director smartly allowed the actors to engage in week-long rehearsals and bond with each other before they actually began shooting, a rarity in independent filmmaking.

The mix of music rehearsals, live band performance, song recordings, choreography sessions and scene work truly afforded Browning, Alexander and Murray the opportunity to not only connect with the songs, but also with each other. While the actors didn’t have much real-life musical experience before they signed on to appear in the romantic drama, their instant understanding of Murdoch’s songs during that rehearsal period infused the music with commanding sentiments.

‘God Help the Girl’ is an emotionally engaging coming-of-age musical romantic drama that passionately explores the difficulties many young adults face as they search for validation and meaning in their work and personal relationships. While Eve, James and Cassie all initially feel as though they’ll easily find contentment once they form a band and start performing together, they quickly realize that dreams aren’t always as fulfilling as they believed.

The plausibility of the film not only relied on Murdoch’s expert songwriting ability to chronicle the pain and joy young adults experience as they’re first introduced to the hardships of the world, but also the bond between the lead actors. The filmmaker smartly cast Browning, Alexander and Murray as the three struggling young adults who bonded over their shared passion of music, but whose differing ideals and personalities soon drove them apart. With the help of the rehearsal period the director offered the actors, their growing ease at performing music and playing off of each other’s reactions made “God Help the Girl” a relatable, endearing film for anyone struggling to find their identity and place in the world. 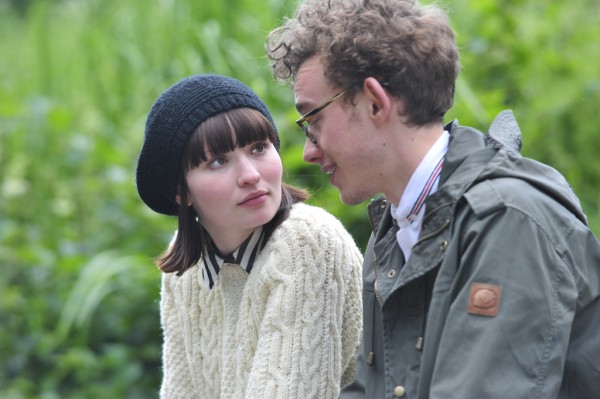