Fionnula Flannagan is cinema’s gift from Ireland, that country’s most engaging actress of a certain age, perhaps the equivalent here in the U.S. of Blythe Danner.  But her presence in “Life’s a Breeze,” presumably an ironic title, cannot save the movie from being little more than a sitcom that you might find on commercial TV or, to be magnanimous, on a cable station like HBO.  “Life’s a Breeze,” taken from a sign on the wall of the Dublin-area house presided over by Nan (Fionnula Flanagan), is the location of an extended family of the unemployed, the slackers, and of high-spirited citizens who despite their financial hardships find warmth, comfort, and a lot of laughs in their togetherness.

The drama takes root when the family’s comic, Nan’s son Colm (a highly amusing Pat Shortt), gets the group together to rid the place of the clutter, as Nan has saved everything from old newspapers to circulars that are wholly irrelevant to everyone but Nan.  Colm conspires with his thirteen-year-old niece Emma (Kelly Thomton) to get Nan out of the house for the day, using the time to renovate.  What they did not realize is that the mattress that they discarded contained—so Nan insists—the elderly woman’s life’s savings, amounting to the staggering sum of one million pounds.  She did not trust the banks and perhaps she had good reason for her suspicions.

The story turns on an offered reward of 50,000 Euros to the lucky person who can find the mattress, the search becoming a national event televised and broadcast over the radio.  The reward money would be based of course, on recovery of the million, but how many persons would be so honest as to turn the bedding in when they have the chance to waltz off with the whole cool million?

The closest parallel to the event here would be Alexander Payne’s film of last year, “Nebraska,” in which a booze-addled man with his son in tow go from Montana to Nebraska to claim a Mega jacket of a million dollars.  There, the younger man tries unsuccessfully to convince his dad that the million does not exist.  In “Life’s a Breeze,” the son tries at first to convince his mom that she must be exaggerating, but he and the rest of the family, seeing how serious Nan is, plunge into the race to recover the mattress, searching all the local dumps and recycling plants while the TV and newspapers follow the chase.

To an extent, the mattress provides an excuse to let us in the audience eavesdrop on ordinary family life during the hard times in Ireland, when scores of men and women line up to fill out forms for the dole.  Especially troublesome is the way that Emma is given school lunches at home made up of a slice of plain white bread and a banana daily.  The special relationship is between Nan and her granddaughter, a thirteen-year-old and an eighty-year-old who trust each other, Emma who is innocent and Nan who is too worldly-wise, the two willing to do everything needed for each other’s welfare.

Like writer-director Lance Daly’s 2004 word “The Halo Effect,” “Life’s a Breeze” is a run-of-the-mill pic but this one featuring a solid performance by newcomer Kelly Thornton, and a slacker son played by Pat Shortt who can evoke audience smiles simply by showing up. 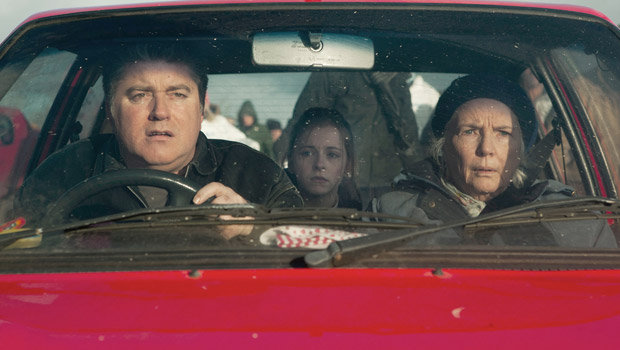