Animation fans have been keeping their eyes on Laika Entertainment, the stop motion studio that’s so far created two incredibly entertaining films that viewers quickly grew to love. Their visual style and sweet stories continually lure audiences into theaters with their charming tales, but there are some who wonder if ‘The Boxtrolls’ is a worthy addition to their ever-growing filmography. It not only stands by to the continual themes of family and unique personalities, but still contains that lovable center that shines through the film.

‘The Boxtrolls’ begins with a bang as the oddly shaped creatures run away from a small group of exterminators hell-bent on wiping out every last one of their kind. While they look for safety they come across a baby, shelter it and raise it as their own. The baby’s disappearance spreads further panic and fear against the Boxtrolls, which aren’t exactly the menacing creatures people believe them to be. They care for the child and raise him as their own, never fully aware that he’s not a Boxtroll but a human. Eventually Eggs (voiced by Isaac Hempstead-Wright) has no choice but to face the world above ground as the fearsome exterminator Snatcher (voiced by Ben Kingsley) is on the verge of wiping out all of the Boxtrolls.

The one theme that gleams from ‘The Boxtrolls’ is how families come in all sort of shapes and sizes, one that’s been used many times before but is still continually powerful enough to use in a number of films. Since each one of the Boxtrolls has a unique name and shape to them, it’s easy to tell them apart and quickly latch onto one as a favorite. This leads into another wonderful fact, and that’s the always stellar design of each character in the Laika world. Each character isn’t 100% symmetrically perfect, but their unique looks are so wonderful to stare at even through 3D glasses. The animation team has a lot on their plate when it pertains to breathing the life into each one of these characters, and their hard work pays off in incredible ways. Not only should audiences tip their hats off to the incredible animation team but salute all the others that put all of their hard work into making the world of Cheeseburg the best it can appear on the big screen.

‘The Boxtrolls’ is one of the very few films out there that’s easy to watch in 3D, and a lot of that has to do with the stop motion animation which really blends in well with the third dimensional movie theater gimmick. The eyes never hurt after awhile from strain over making the 3D pop, because there’s so much depth between the action and background in each shot. A tip of the hat goes to directors Graham Annable and Anthony Stacci, whose combined efforts is just one of many aspects of this film that worked into becoming the delightful end product movie-goers are able to see in theaters now. When it comes to the humor, a lot of those credits should go to the screenwriters and the cool voice cast, a couple whose voices audiences won’t even be able to recognize until the end credits roll in.

Let’s just get it out of the way and talk about Ben Kingsley, a versatile actor whose performances throughout the years have continued to wow viewers. There’s a couple of surprises in store for people who watch ‘The Boxtrolls,’ so without spoiling the overall story let’s just say he’s got a wide range of talent even through his voice. He’s able to verbally embody the menacing presence of Snatcher but is still able to display bits of sensitivity, vulnerability in certain scenes. Isaac Hempstead Wright and Elle Fanning bring this wonderful spirit to their characters. A couple of the biggest scene stealers within ‘The Boxtrolls’ were the voice actors of the supporting cast which included Richard Ayoade, Nick Frost, Tracy Morgan and Simon Pegg. There’s definitely a couple of funny quotes that both kids and adults won’t be able to get out of their heads once they finish watching the movie.

‘The Boxtrolls’ is an enchanting film that audiences of all ages can enjoy. It’s an adorable film that movie-goers should see both in 2D and 3D. 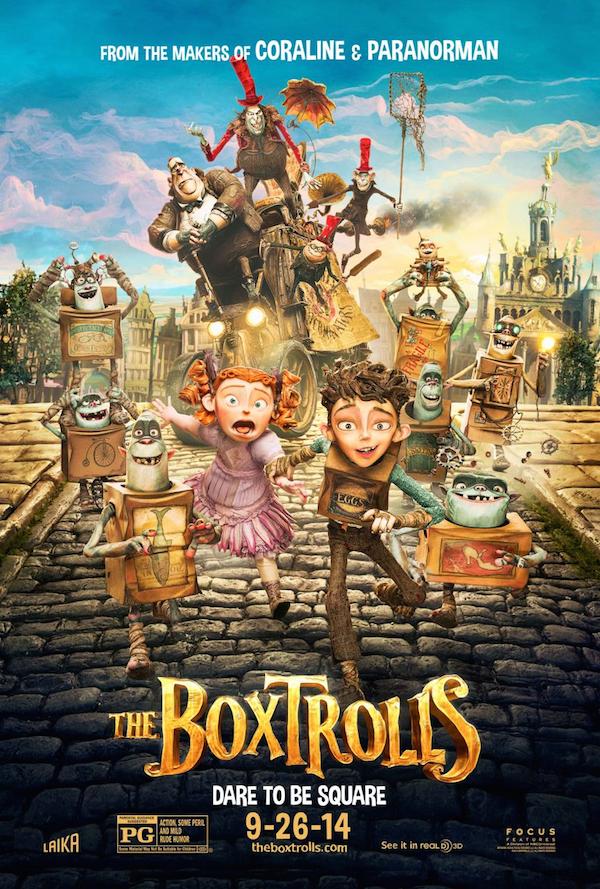