Ryan Murphy’s “American Horror Story: Freak Show,” starring Kathy Bates, Jessica Lange, Michael Chiklis and Angela Bassett, has had a stellar start to their new fourth season, complete with a new clown villain that will make viewers terrified to sleep at night. But “Freak Show” isn’t the only story out there based on a scary retro carnival. While you’re jonesing for the next episode of “American Horror Story”, be sure to check out “Carnies” on FilmOn.com.

“Carnies,” one of the latest films added to FilmOn’s huge library of entertainment, stars Reggie Bannister (Phantasm: Ravager) as Det. Conrad Ellison, who has to investigate mysterious deaths at a traveling sideshow in 1936, the middle of the Great Depression. Even though the carnival distracts the townspeople from their real world economic horrors, Det. Ellison has to figure out who is perpetuating the horrors inside the carnival. Is it the carnival owner Helen (Denise Gossett), strong man Virgil (Chris Staviski), or the resident snake handler Ratty (Doug Jones) or his friend William the sword swallower (David Markham)?

If you love “American Horror Story: Freak Show,” you’ll have tons of scary fun with “Carnies.” Like “Freak Show,” “Carnies” is set in a time gone by and, of course, “Carnies” will play on your fears of carnivals just like “Freak Show.” If you want to watch the film for yourself, check it out on its page on FilmOn. FilmOn’s movies and television channels are available for free viewing in SD or, for a low monthly subscription, in HD with added DVR recording space.

What about carnivals scare you? Discuss your carnival fears in the comments section below! 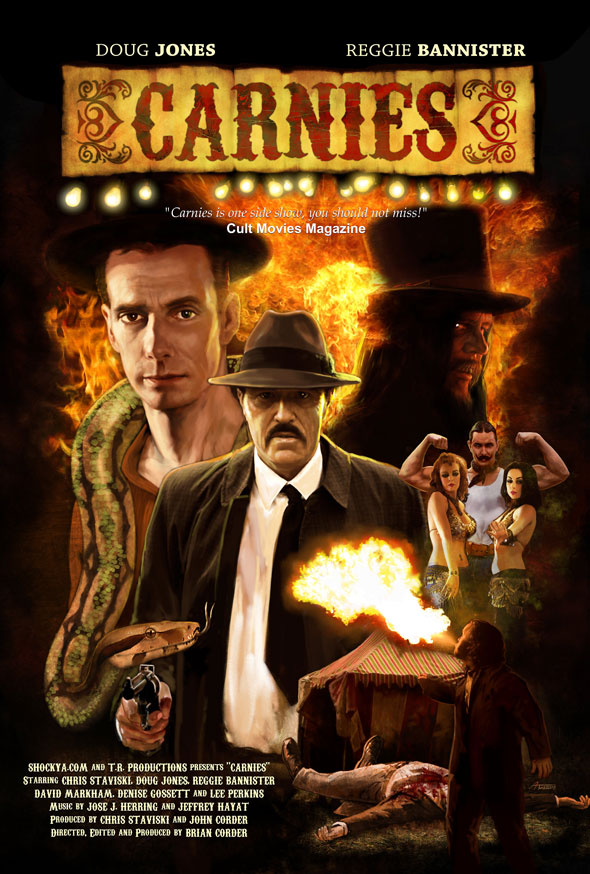