When it comes to making a movie, there’s a lot of vital elements needed in order to get a project going and eventually end up as a shiny new feature film. There is a number of people who contribute to the process, but there’s only a handful who stick around from script all the way to finalizing the cut to be shown in theaters. If it wasn’t for the producer and directors on these projects, organization on these films would fall into some chaos.

Normally they’re the ones who the public tends to blame if a movie didn’t turn out the way they envisioned it, but people should tip their hats to producers and directors out there. If it wasn’t for their continued efforts with various films, audiences wouldn’t have enough movies to chose from to watch on a random night.

In order for ‘Big Hero 6’ to transform from a simple idea to an animated film, it took a lot of time, patience and some research from co-director Don Hall. After all, it was his rummaging through the pile of Marvel properties that sparked the idea of taking a lesser known property like ‘Big Hero 6’ and turning it into something much larger than many would ever have imagined. Once the plans were set in place to create the animated film, co-director Chris Williams hopped onboard with producer Roy Conli making sure the production stays on track. 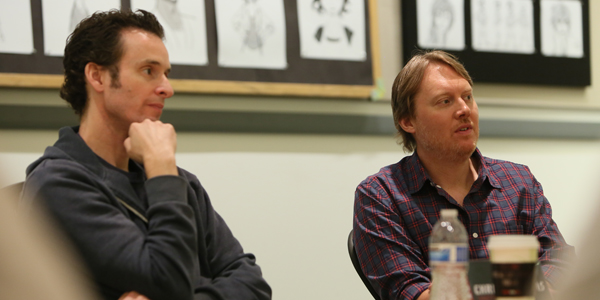 The group of journalists were ushered into a room, but one not as flashy as the previous ones. There was a few ‘Big Hero 6’ images lining the upper half of the walls, but the main focus was on co-directors Don Hall, Chris Williams and producer Roy Conli. ShockYa.com and others were able to take part in speaking with the trio on their wonderful journey of breathing life into the once lesser known property called ‘Big Hero 6.’

You’ve taken the title and these characters and then spun your own thing out of it. What was it that drew you originally to that world in the first place?

Don Hall: That is a good question. What drew me to this at the beginning was the title. I know that seems silly, but early on John Lasseter and I were talking on about possibly taking Marvel property and doing something with it. I just started doing research based on my own childhood memory of the comic books I liked. On lunch hours I would look at their website and look at different properties. I came across ‘Big Hero 6’ and it was this Japanese superhero team. I thought that it sounds cool. Got a few of the comics, read them and I really liked the tone, which was sort of playful and fun. It felt like it was this love letter to Japanese pop culture in superhero form. Also, there was this core relationship between young protagonist, this 14-year-old super genius and a robot, which I felt could become the emotional core of the film.

Once we started talking with Marvel, they really encouraged us to take it in our own direction. Don’t feel like you have to set this in the Marvel universe. You can take it and make it your own. To be able to do that, I felt like we needed to do more of a fantasy world, and so this idea of mashing up two cities became really fun. It’s just a mashup of Disney/Marvel, this city could be a mashup of different aesthetics. Tokyo was the obvious one and San Francisco kind of hit upon this idea of that there’s a lot of cool landmarks that you could put a Japanese makeover on and make really interesting and new. So that’s sort of how we set upon San Fransokyo. As far as the comics, we didn’t really pick up on any story lines from the comics. We took the characters more from the sort of later Chris Claremont run, just took the title and the characters and just reinvented everything.

Did Marvel they have much of an involvement in this at all or no?

Don Hall: Yeah, we called them friends of the court. We got to be pretty good friends with Joe Quesada and Jeph Loeb, who’s their chief creative officer. They came to screenings and became part of the story trust meetings after a screening. They would give me notes like any member of our story trust. 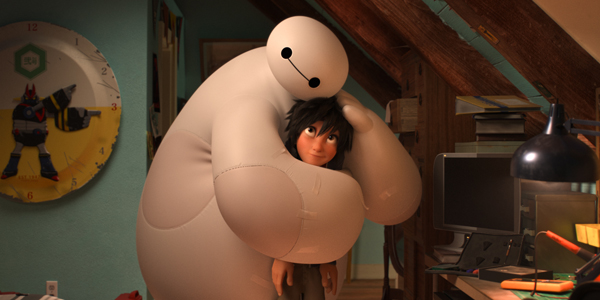 Chris Williams: It was great. They were very supportive throughout and gave us their thoughts. They’re really smart guys. At the same time they were not possessive. They didn’t have an idea where it’s gotta be this. They understood it was something that we had to make our own and they were supportive of that all the way.

Normally the first screenings when you’re developing is disastrous. Nothing really comes through. But what actually came through in this process. What did you really nail from the get-go?

Chris Williams: When Don first pitched this idea of ‘Big Hero 6,’ there was just something at the core. There was something about this idea of a boy who experiences loss and this robot that’s going to fill the void. There was just something so powerful about that, and we always believed in that potential, and that’s where you always start. As a group of people you embark on this journey of years to develop the story, and you have to believe there’s the promise of potential. Screening after screening, you’re not making the actual movie. You’re just making a platform for which to see what the movie is ultimately going to be. You build a higher and higher platform, but the nice thing is everyone goes in knowing you’re not making the movie. It’s just a tool to find the movie and so we work in an environment where you can screen to John Lasseter and the rest of the directors, our story trust, and get feedback. We have to be very good about knowing what our movie is, what we think it’s going to be, what our strengths and weaknesses are at any given day. At the same time you have to be able to listen to other points of view and people who are challenging your assumptions. But it’s also a very supportive environment. You’re forgiven when a screening isn’t great because of course it’s not great. And that’s the world we work in.

Don Hall: The plot is probably a little different, but the idea of San Fransokyo, the protagonist dealing with the loss of his brother and Baymax becoming the surrogate big brother. The transformation of Baymax from a kind of caring, compassionate nurse robot to this badass meched-out warrior, those were elements in that first screening. From there, scenes change, new scenes emerge. 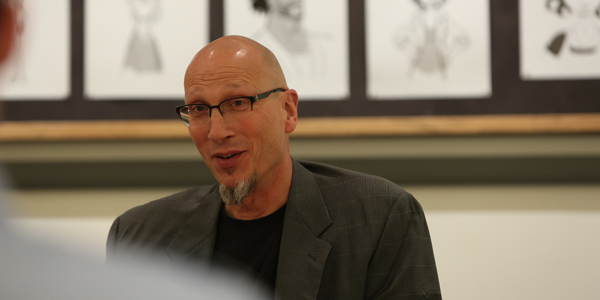 Can you give us an example of that that happened in the movie?

Chris Williams: The character of Wasabi was one of those examples where he evolved quite a bit. He was initially sort of a zened out, blitzed out character, more even keeled. But we found that worked as a concept, but that wasn’t helping the other characters firing off. He wasn’t firing off with the other characters. We made him a bit more of someone who’s actually a grounded character, recognizing that being a superhero is kind of crazy and dangerous and is it a really good idea? Someone a bit more conservative. Suddenly a lot of the characters fired off better around him and he fired off better around them, so that was one that evolved for those reasons that sort of serving other aspects of the story.

It appears that casting ends up being far into the process with a movie like this. How does it change things? How did you land on these particular people? How do you not have that voice from the beginning to help define a personality?

Don Hall: Our screening process allows us to start to iterate on these characters prior to having the actual actors because we’ll get ourselves to do it or scratch actors. You can kind of start to hone in on broad personality types through the screening process, and then we would always challenge our casting department to bring us great and interesting choices. For this one they really came through in spades. Our cast is awesome. It’s just funny, inventive and so willing to play with us, and so invested in their characters too. They didn’t come to just read pages, they came with ideas on what the characters, who they are.

Is there anything that changed specifically when you cast them?

Don Hall: Well, I think they all did. They all brought a lot of themselves into the role. Because they’re all good improvers, they can just take something very little morsels and turn it into wonderful entertainment. They can do a lot with very little, and so they all would go with we wrote, but it was such a luxury… and you would find little nuances in the character through their ad-libs.

Chris Williams: One example was TJ Miller. You might take one look at him and just dismiss him as a sort of typical slacker dude character you’ve seen before, but he’s so smart. It all comes through. You sense that he’s something more than he’s letting on initially, and I think that also really informed that character. 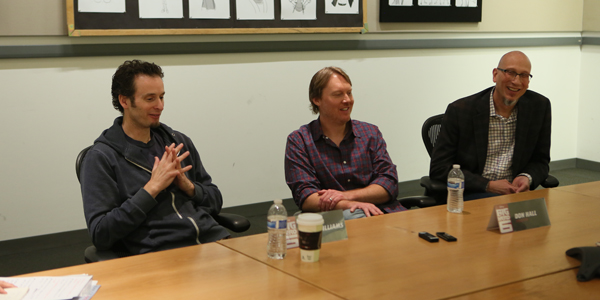 Roy Conli: You’ve got to remember, we reiterate on this thing many times. We’ll have maybe 9 full screenings of this thing, and we generally get them around the third or fourth screening. That gives you half of your development with the talent. The way, there’s generally around 12 weeks of iterations, it gives you the ability then to start molding the character to fit that.

Do you actively avoid getting them early in the process and potentially getting them to influence the characters more?

Roy Conli: From a producer’s standpoint I do hold off on getting them only because many times we’ve hired early and the character disappears. Before I like to lock characters, I like to make sure that we actually are invested in that character and we’re staying with him. Cause it’s really nasty going to someone and saying sorry, you’re not in the film anymore.

How far ahead have you thought about things post-‘Big Hero 6’? Are you thinking about a franchise or sequel?

Don Hall: Well we have stories plotted out for the next 25 years… You know what, this one, we just wanted to leave everything on the field with this. We just want to put everything in this one movie, knowing full well that there’s potential with these characters and this world to do any more stories. It’s about how this group, this sort of team came together. Obviously we know there could be more, but we haven’t had the luxury of…

Chris Williams: There’s really been no energy or conversation being put into a sequel or what might happen beyond the story. It is true that when you spend years working on these movies, you really start to feel close to these characters. You start to love these characters, you start to feel like you understand them, and then you want to spend more time with them. That’s just something that happens naturally, but we haven’t put any thought into that.

People have become really protective of their conceptions of the character. You hear them say “Well _ would never do that!” And that’s when they’re real. The idea of them living on would be great but not something we’ve thought about.

‘Big Hero 6’ comes out in theaters nationwide on November 7, 2014. If you want to check out even more coverage on our early press day, read ShockYa’s previous post along with more articles to come soon.