Katniss Everdeen is bravely making her Return to District 12 in the all new preview from ‘The Hunger Games: Mockingjay – Part 1,’ which was unlocked by fans exclusively on Twitter. The preview’s release coincides with the announcement that the sci-fi action film’s distributor, Lionsgate, is planning to hold the sequel’s world premiere on November 10 in London.

Besides debuting the anticipated third installment of the acclaimed ‘Hunger Games’ film series in England, Lawrence will be joined by her ‘Mockingjay – Part 1’ co-stars, Josh Hutcherson, Liam Hemsworth, Sam Claflin, as well as director Francis Lawrence and producers Nina Jacobson and Jon Kilik, as they embark on a World Press Tour. The publicity circuit will start in Beijing, and then make stops in Seoul, London, New York and Los Angeles, before the third entry in the global blockbuster franchise opens in theaters on November 21 worldwide.

Elizabeth Banks, Julianne Moore, Natalie Dormer, Stanley Tucci and Donald Sutherland, who are also featured in ‘The Hunger Games: Mockingjay – Part 1,’ will join the delegation in London for the film’s world premiere in Leicester Square. All of the cast will later reunite for the Los Angeles premiere on November 17 at the Nokia Live Theater.

Fans in the U.S. who purchase tickets on Fandango on October 29 during the first 24 hours of advance sales will be entered for a chance to win a trip to the film’s London premiere. All purchases on the official Fandango, AMC Theaters, Cinemark and MovieTickets websites in the first 24 hours will also receive a free download of ‘The Hunger Games: Catching Fire’ on VUDU.

Lionsgate, which will distribute ‘The Hunger Games: Mockingjay – Part 1’ in theaters nationwide on November 21, has released the following official synopsis for the sci-fi adventure film:

The worldwide phenomenon of ‘The Hunger Game’’ continues to set the world on fire with ‘The Hunger Games: Mockingjay – Part 1,’ which finds Katniss Everdeen (Lawrence) in District 13 after she literally shatters the games forever. Under the leadership of President Coin (Moore) and the advice of her trusted friends, Katniss spreads her wings as she fights to save Peeta (Hutcherson) and a nation moved by her courage. The Hunger Games: Mockingjay – Part 1 is directed by Francis Lawrence from a screenplay by Danny Strong and Peter Craig and produced by Nina Jacobson’s Color Force in tandem with producer Jon Kilik. The novel on which the film is based is the third in a trilogy written by Suzanne Collins that has over 65 million copies in print in the U.S. alone. 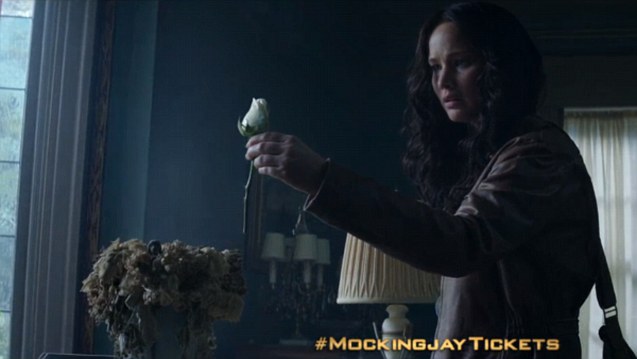