Adult Swim is celebrating the premier of their new show Mike Tyson Mysteries with a nationwide scavenger hunt. The prize is a limited edition two foot tall statue of the World Heavyweight Champion in a track suit feeding a pigeon. The scavenger hunt is running all weekend from Sat Oct. 25th to Monday Oct 27th. and is taking place in 10 major cities throughout the country including Los Angeles, New York City, Austin, Chicago, Denver, Seattle, Nashville, Albuquerque, St. Louis, and Kansas City. Those not close enough to sleuth for clues in person can still enter the sweepstakes for a chance at show prizes. To participate and for more information visit their site at AreMysteriesReal.com to start on the quest.

The show stars Mike Tyson, who voices himself, as he takes on cases and chases down the mysterious and pummels it into answers. Hi co-stars are a talking pigeon (voiced by Norm MacDonald), a ghost (Voiced by Community‘s Jim Rash), and his teenaged adopted Korean daughter (Voiced by Rachel Ramras).

Mike Tyson Mysteries premiers Monday, October 27 at 10:30 p.m. ET/PT. For those eager to catch a glimpse of it before then, the first episode is also available by streaming on the Adult Swim YouTube channel. Mike Tyson and The Gang kick things off by helping out their first client, Pulitzer Prize winning author and known centaur Cormac McCarthy, and find themselves squaring off against the dreaded legendary Chupacabra along the path to inspiration.

For more, check out our interview with Iron Mike himself talking about being in his own cartoon! 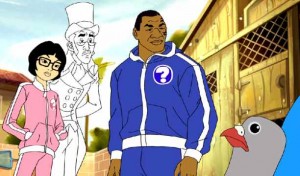