Before I Go To Sleep Movie Review

Title: Before I Go To Sleep

When it comes to describing the kind of emotion that ‘Before I Go To Sleep’ gives movie-goers, the best word to use is “thrill.” It’s a simple term, but the use of that word it opens up the doors to a whole myriad of descriptions about this film. It’s just the tip of the iceberg of adjectives used to describe this psychological thriller, a quiet but strong movie that can manage to stay in the viewer’s mind long after the film is over.

‘Before I Go To Sleep’ begins with our heroine Christine (played by Nicole Kidman) waking up from her sleep, but completely confused and almost terrified over where she is or why she looks so old. She suffers from a rare form of amnesia that erases all memories in her mind of what she’s done the day before when she goes to sleep. Christine is only able to retain memories that she has up until her twenties, so to wake up as a woman in her forties every day is a complete shock to her. One day Christine realizes that this needs to stop, and that she must try to remember what brought her to this stage. At that point she begins questioning who she can really trust, and who is trying to deceive her for their own selfish purposes.

Nicole Kidman has always been a fine actress, calling upon her wide range of emotions and talent. When she blends that in together with the amount of research she did for this role and shows one of her best performances she’s done in the past couple years. And it certainly does help that she’s got a small but stellar supporting cast backing her up. Colin Firth and Mark Strong both seep out of their stereotypical roles and help blur the lines of Christine’s world, making the audience continually question which of the their two characters is the one she can really trust. Colin plays Christine’s husband Ben, whose intentions seem to be genuine but viewers quickly find out that there’s some information that he’s purposefully withholding from her. At the other end of the spectrum is Mark Strong as Dr. Nasch, a doctor who’s investigation into Christine’s condition immediately puts her on edge. But is he really somebody who she can trust, or should she stay far away from him? It’s a continual guessing game up until the last couple scenes of the film, which makes the cinematic ride all the more enjoyable to sit through.

A lot of the twists and turns that emerge from ‘Before I Go To Sleep’ come from equal parts source material and the adapted script from Rowan Joffe. ‘The American’ writer had a firm grasp on what kind of world Christine was tackling, and he takes extra care in injecting the fear of the unknown into her viewpoint. But let’s not forget that she’s not an entirely fragile character. After a certain point in the story Christine begins taking control, getting a better grasp of what’s happening around her, and that works so well onscreen due to the script and also thanks to Kidman’s performance.

The transition of the first to the second act could have easily fallen into a trap where the small discoveries of Christine’s life gradually dull the viewer’s interest, but that isn’t the case. Each event, every new discovery that is found through the eyes of Christine is exciting to uncover. And since the viewer is fastened into Christine’s viewpoint, equally unaware of what’s the truth, they easily fall into the traps of specific story twists. If Kidman’s performance wasn’t fantastic, ‘Before I Go To Sleep’ wouldn’t be as entertaining to watch.

Rowan Joffe carefully planted out the camera angles and techniques needed in order to visually deliver this film. The viewer finds themselves weaving in and out of her almost claustrophobic world, wandering through the bleak hallways with Christine as everyone tries to peer over her shoulder and possibly find a clue that’ll help her uncover parts of sordid past that brought her to this point. Some of the camera styles are a little overdone, but the motivation for closing in the viewers into that specific point of view is easily seen and is effective for the film.

‘Before I Go To Sleep’ is a very compelling psychological thriller with a solid script and grade-A acting that’ll keep viewers engrossed in the story from start to finish. 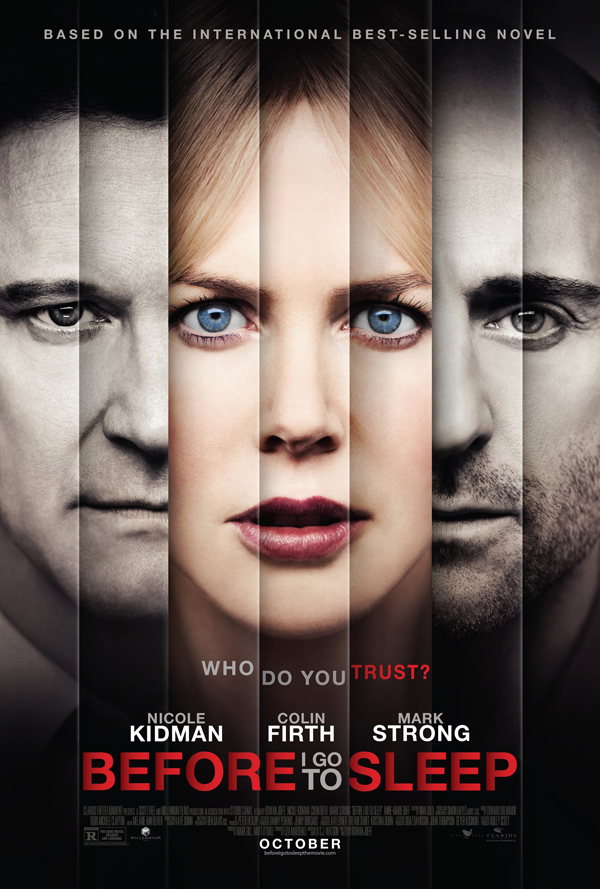