Title: The Theory of Everything

Facing life-altering limitations that threaten not only your physical lifestyle and body, but also your work, emotional mindset and relationships, can be a completely devastating challenge to many people. But director James Marsh’s new biographical drama, The Theory of Everything, which is based on Jane Hawking’s book, ‘Travelling to Infinity: My Life with Stephen,’ is a profound exploration on how the author determinedly strived to combat her ex-husband’s crippling disease, and not allow it to completely rule her life. Having married famed scientist Stephen Hawking during the on-set of his motor neuron disease, Jane intensely helped him challenge the odds to continue living and succeed in his career and with their family. Despite contending with the constant stress of caring for both Stephen and their children during their marriage, and giving up fully exploring her own career in the process, Jane appreciated the time they had together, and didn’t let his illness stand in their way of getting what they wanted.

‘The Theory of Everything,’ which begins in 1963, follows Stephen (Eddie Redmayne) as he’s a cosmology student struggling to find a topic for his thesis at the U.K.’s Cambridge University. While contemplating how he can find the one simple equation that could explain the start and meaning of the universe, and how he could figure that question into his doctrine, he meets and instantly connects with a fellow student, arts major Jane Wilde (Felicity Jones). But soon after they realize their true love for each other, Stephen is diagnosed with motor neuron disease (which is more commonly known as Lou Gehrig’s Disease). His doctors give him a prognosis of two years to live, during which his limbs and motor skills will deteriorate, and leave him with limited speech and movement.

Despite the short amount of time Stephen’s doctors believe he has left to live, Jane is unwavering in her love for him. Her resolve to maintain their relationship leads them to get married, and gives him the courage to finish his doctorate. While Stephen tries to prove the initial theory of the creation of the universe and embarks on his most ambitious scientific work, he begins a family with his new wife.

Since he’s faced with the limited amount of time he’s expected to have left in his life, Stephen also incorporates how time also factored into the universe’s history. Through his commitment to his scientific work and family, he continues to defeat the odds and remains healthy enough to keep living. However, the strain of maintaining Stephen’s care throughout the course of their marriage leads Jane to take comfort in her new friendship with Jonathan Hellyer Jones (Charlie Cox), the choir director at their church. But Jane remains loyal and committed to caring for her husband and their three children. Through her continued support for Stephen, the family achieves more than they ever could have imagined in medicine, science and the appreciation of love.

Screenwriter Anthony McCarten, who spent several years working with producer Lisa Bruce to secure the full legal rights to adapt Jane’s book, as well as the Hawkings’ blessing to chronicle their marriage and lives on screen, powerfully showcased his dedication to recounting their live together. Without over sensationalizing or sentimentalizing the couple’s history, and instead focusing on the complexity of their marriage, ‘The Theory of Everything’ is a powerfully emotional account of the commanding love Jane and Stephen felt for each other over the course of their 25-year marriage.

While many people are aware of Stephen’s important achievements he made in physics, as he struggled with the physical limitations of his disease, McCarten proved that Jane is just as honorable and noble is throughout the biographical drama. Setting the film in Jane’s point-of-view, the screenwriter was effortlessly able to emphasize the difficulties she often faced while trying to care for her husband and children, and the personal sacrifices she had to give up in order to do so.

In the beginning of the drama, Jane is shown to be fiercely independent and motivated, having attended college during a time when women furthering their education wasn’t entirely supported. She also refused to give up on her pursuit to continue her romance with Stephen, despite his instance he wanted to deal with his illness without her help. While Jane wasn’t as focused on her career after she finished school and her husband’s health was declining, she’s enthralling presented as being entirely supportive of Stephen’s strives in science and his happiness, which proves what an upstanding woman she truly is.

With Jane being the anchor of the Hawkings family throughout the course of ‘The Theory of Everything,’ the biographical drama needed a leading actress who could be both emotionally delicate and powerful at the same time. Jones was the perfect choice to play the struggling wife, as the actress brilliantly conveyed Jane’s internalized struggles about continuing her marriage. After meeting Jane to get a better sense of her emotions, motivations and life overall, Jones vividly captured her true identity of always willingly putting her family’s needs before her own. Jones effortlessly showcased what it was like for Jane to fall in love with someone who’s suffering from a debilitating illness, and allowing love to overcome her fears of what a relationship with Stephen would truly be like. Whether Jane was harrowingly watching Stephen struggle to adjust to living life in a wheelchair, or contending with having a husband who could make important scientific discoveries but was unable to truly play with their children, Jones was the perfect actress to emphasize what a pillar of strength she truly was for not only her family, but also the world.

Although Jones entrancingly presented Jane as an inspirational role model to not only her own children and husband, but also mothers around the world who are continuously looking for someone who could positively influence the way they approach raising their families, finding the right actor to portray Stephen was just as challenging. But Marsh rightfully cast Redmayne to portray the iconic public figure, as the actor instinctively portrayed the scientist as someone who wouldn’t let any obstacle stand in his way.

The Tony Award-winning performer, who started his acting career by performing in productions in London’s West End and on Broadway in New York, reverted back to his theater skills to portray how his character’s emotions through his physicality. Throughout the course of ‘The Theory of Everything,’ Redmayne compellingly showcased his intensity and deep commitment to showcase the physical deterioration of his character’s body during his marriage to Jane, which lasted into the 1990s. The actor’s tireless training in the months before filming began, which included working with a vocal coach and movement director and working with patients at a clinic, to fully understand how to showcase the degeneration stages of motor neuron disease proved his dedication to the rule. His dedication to perfectly mirroring Stephen’s limited facial expressions and body movements, as well as the change in his voice and his difficulties in speaking, truly allows the audience to understand the emotional toll the disease had on the scientist.

‘The Theory of Everything’ is a powerfully gripping exploration of how two motivated and determined academics like Stephen and Jane Hawking could define the odds and maintain a loving marriage for 25 years, even as they both strived to capture their own professional successes. While Jane truly loved Stephen throughout their relationship, and wasn’t afraid to work to make their marriage successful, McCarten enthrallingly proved that she did indeed struggle with the difficulties of her marriage and the stress of her husband’s disease. With the equally dedicated and captivating performances by Redmayne and Jones, the drama proved that people can obtain what makes them truly happy, even after struggling with their earlier decisions and dealing with life-defining obstacles. 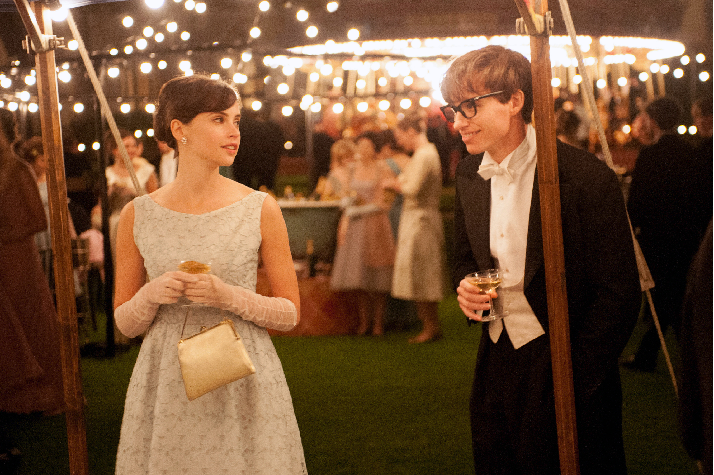 Cancel reply
New Trailer and Artwork for The Hobbit: The Battle of the Five Armies Released
New Behind-The-Scenes Featurette for ‘The Theory of Everything’
To Top