The controversial topic of whether witnesses to crimes should bravely step in to help the victims, or not become involved and let the police handle the illegal offense, has often been debated in society. That heated discussion is the gripping driving force in the new horror short, ‘Good Samaritan,’ which was written and directed by ‘Final Destination’ co-scribe, Jeffrey Reddick. The short, which launched the After Dark Screenings portion of this year’s Savannah Film Festival, is an intriguing exploration into how a witness who wants to physically protect themselves during an assault can led to them holding tremendous guilt for not helping the victim after the attack.

‘Good Samaritan’ tells the story of computer programmer Nathan Rome (Toby Hemingway), an agoraphobic who videotapes a man being fatally beaten while bystanders watch without intervening. After two other witnesses to the crime die mysteriously, Nathan gives famed news reporter George Reed (Rainn Wilson) a satellite interview. During the conversation, Nathan tries to defend his decision to tape the attack against the journalist’s heavy criticism that he didn’t help the victim. After their heated debate, Nathan begins to worry that he’ll be the next witness to die, as he wonders if his own guilt is tormenting him, or if something far more insidious has decided he will be the next to go.

Reddick generously took the time to talk about penning and helming ‘Good Samaritan’ following the horror short’s premiere at the Lucas Theatre For the Arts during the 17th Annual Savannah Film Festival. During the interview at the festival, which was presented by SCAD (the Savannah College of Art and Design), the filmmaker discussed, among other things, how he was in part inspired to make the film after he tried to intervene to help a woman whose boyfriend was assaulting her; how he made his directorial debut with the short, but having been in the film business since he was 19, he knew the best way to succeed was having a supportive cast and crew around him; and how the processes of penning the screenplays for ‘Good Samaritan’ and ‘Final Destination’ were similar, as he was conscious of keeping the budgets low, and how to create unique kills, on both projects.

Question (Q): What was your inspiration in making your first short film, ‘Good Samaritan?’

Jeffrey Reddick (JR): When I was younger, there was a well-known story in New York City about a woman (Kitty Genovese) who was assaulted in her apartment complex. The urban legend at the time was that everyone listened and watched, but nobody helped. That story always stuck with me. The myth was later proved to be false, as it was confirmed that people did call police and tried to help, but not enough.

One time, I also saw a woman whose boyfriend was roughing her up on the street. I was drunk, but I still tried to go over there to help her and intervene. But the guy kicked me, and I thought he was going to punch me in the face. I didn’t know in the moment he had a gun, but I didn’t think about that.

So that idea of people not helping others was always stuck me. I always try to put a deeper subtext like that into my films, which is one reason why I like this genre.

Q: We just screened ‘Good Samaritan’ here at the Savannah Film Festival. What has the experience been like for you so far?

JR: Before now, we’ve only played the short in horror festivals, so this is the first non-genre we’ve played at. It’s very prestigious to play here, and it’s been very fun so far.

Q: ‘Good Samaritan’ kicked off our After Dark screenings, and it’s a great way to start. This is your first short, so what was the experience of making it like for you?

I knew going onto this set that the key to being a good director is having a good team around you. So I had a really great producer, Thommy Hutson, who’s hiding in the back of the theater. (Reddick laughs as audience applauds.) I also had a really great cast with Rainn Wilson.

It was actually more stressful in post (production), because things weren’t getting done on time. But the actual shoot was great. But it also got stressful on the last night of shooting, as the sun was getting ready to rise. But overall, it was a lot of fun.

Q: Speaking of Rainn Wilson, did you approach him and ask him to appear in the short? He has such a strong comedy background, but he was also in ‘House of 1,000 Corpses.’

JR: It would be cool if I could say he got a hold of the script and tracked me down. But I actually went to him and gave him the script, and he liked it. But I didn’t intentionally go to him because I wanted to go against type. After he read the script, he loved it, and he was a breeze to work with on the set. It was a great experience.

Q: Also speaking of the shoot, which you mentioned earlier, how long did it last overall?

JR: We shot all the stuff in the house in two days, and the (assault) sequence in the park in three hours.

In case you didn’t notice, Jane Badler, who was in the original 1980s ‘V’ series, and also played the mother of the alien leader in the remake show, was the businesswoman on the street in the short. I had the weirdest crush on her. (Audience laughs.) When I first got to meet her, I was so star-struck, and I had to put her in my short. She was in Australia (where the short was filmed), so she offered to be in it.

Q: Can you discuss the differences in the creative process for a major feature like ‘Final Destination’ and a short like ‘Good Samaritan,’ which is only 12 minutes in length?

JR: There aren’t a lot of differences. The thing about growing up in a studio is that we were very budget conscious. New Line was a mini major studio at the time (I worked there). So they always taught us about maintaining a high concept, while keeping the budget in check. So I always write things that can be done on a low budget; even ‘Final Destination’ could have been made on a much cheaper budget than it was done.

Q: The end sequence and credits initially seemed to be shot with a crane, but they were actually filmed with a drone. Can you talk about that process?

JR: Well, I first want to mention that I did the end credits incredibly wrong. Apparently, you’re supposed to flash people’s names at a certain point, and then have a scroll. But I was so worried about being pretentious that I wanted to get through the credits quickly. My post team was like, “You put the credits in too quickly.” Then when I showed the short to everybody, they were like, “Why did you do your credits wrong?” I was like, “Screw you, that’s the new way to do credits.” (Audience laughs.)

As for the drone shot, the operators who did our post work said they knew a company that was interested in working with drones. When I heard that, I said, “I don’t care if I have to do the whole movie in claymation-I need a drone for that last shot.”

That shot turned out to be awesome, even we only had the drone for three hours. We only had that short window in the middle of the night, and Toby was a little nervous about it. He was like, “I want to make sure it doesn’t fall on my head.” But it has a great stabilization system, and it looks really smooth. So everything I film now will have a drone.

The shot really emphasized the movie’s tone of being isolated and disoriented. So I was very fortunate to be in the right place at the right time with the right people.

Q: Is there any advice you can give to film students who want to pursue a movie career like you did?

JR: Well, I started off wanting to be an actor, back in the early 1990s. I wanted to be the first interracial Teen Beat centerfold. But that did not turn out so well. (Audience laughs.) But they didn’t really know what to do with me back then, because non-traditional casting wasn’t the norm. I was told I was the ethnic Michael J. Fox-type. My agent was like, “Why don’t you play basketball?”

After that, I began writing, but I still had the acting bug. But after awhile, you see people start messing with your scripts. I was like, I want to have some control over it, and that’s why I moved over into directing.

But I thought that was crap, because I started young. I started in an internship at New Line, and then started making commercials. But it was literally 10 years after I graduated from high school that I sold (the script for) ‘Final Destination.’ So the 10-year rule did kind of apply. So I would say to stick with it.

Also, be open to receiving guidance and advice. There are too many people who would say they’re amazing at a very young age. I look back at my early stuff that I sent to New Line, and it was horrible, and I had terrible coverage. But they told me I had good coverage, which was good. Otherwise, I would have given up.

So you always have to be open to learning. If you start thinking you’re the best at what you do, then you won’t grow. Also, be open to collaborating.

Q: You’ve brought the short to several festivals, like you mentioned. So what’s next for you and the film?

JR: I’m working on several projects. I’m going to direct my first slasher film, which is exciting. I also (recently published) an E-book on one of my older horror films, ‘Tamara,’ and is based on the R-rated script I originally wrote for it. 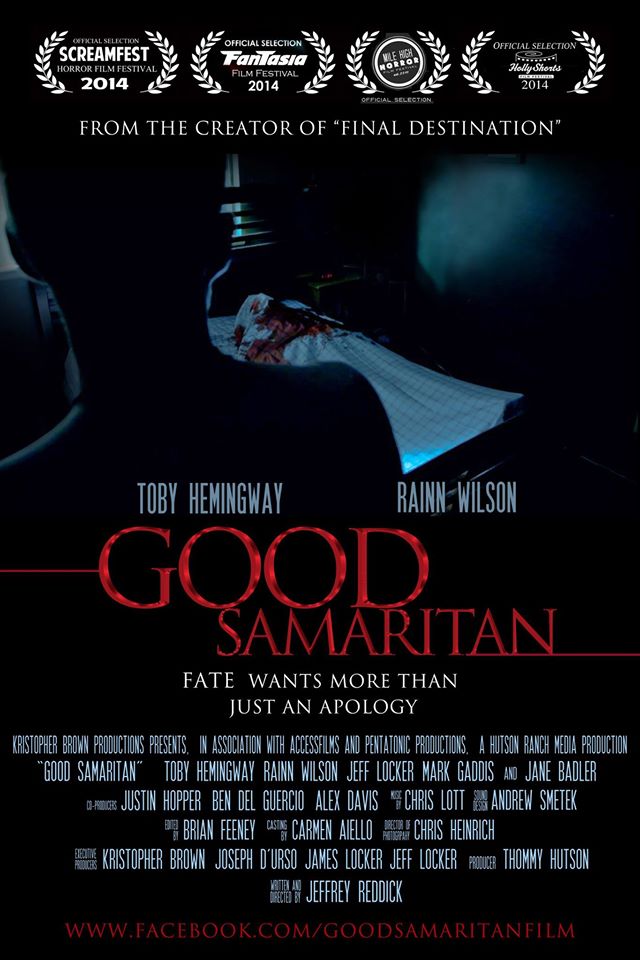