Maria Bamford appeared last week at Nerdmelt in Los Angeles as part of a special Picture This! comedy event which features comics performing while illustrators and artists animate to their routines on a screen live. Picture This! was created Brandie Posey and Sam Varelaby. This edition spotlighted the Comedy Central show Brickleberry and had comedy voice talents John DiMaggio (Futurama, Adventure Time) who plays Duke and Jerry Minor (SNL, Anchorman) who plays Denzel, put their skills on display along with animators from the show. Bamford is a renowned stand-up comedian and has appeared on Comedy Central specials and shows like Arrested Development as well as being featured as a voice on Adventure Time, BoJack Horseman, and Golan the Insatiable.

You aren’t on Brickleberry but you’ve been doing a lot of cartoon voice work, how are you enjoying it and how did you transition into starting that?

I was a receptionist at Nickelodeon, they were having auditions and they said, “Do you want to come in?” and I think through comedy I was able to get some other roles after too. As a voice-over artist if you’re already known for something you’re likely to get other jobs. For Some people though that’s their specific art-form.

Is it fun for you to get to see the voices that you use animated outside of your own stand-up sets?

Oh yeah! I hope that they’re fun to animate. I’m sure they have to hear the same voices 1000 times so I’d think it must be nice if there’s emotional content to it or if somebody likes what they are listening to, so I hope it’s good! I don’t always get to meet the artists or be there while they’re doing it for sure, not like I got to tonight.

Was being live-animated in stick-figure everything you’d hoped for?

It was! I didn’t realize that I have to look at it and comment on it, I think I’m more of a scripted person so just go “I’m just gonna barrel through my jokes”. I would’ve the next time out interact more with what was happening.

Do you watch the finished episodes of your shows to see what they did with it later?

A little bit, but you know how life and time works, and then there’s a sleeping schedule- that’s at least 11 hours, and I eat, so that along with friendship, it cuts into my cartoon watching budget. I recently got engaged. You know Love? The reason for living? It means sometimes you can’t watch TV. All sorts of love, Agape, the Latin version of Love, really all Latin versions of love. Including Latin love.

Speaking of passion, what projects are you working on right now?

I’m trying to work on developing something for Netflix. Working on that, don’t know what’s going to happen with that but it’s still in play. Talking about doing a stage show maybe. I’m open to everything. I just did a thing called Storytime, you tell a story and then you play the parts in the story. Maybe do something else with them. A lot to do, and talk about. Mainly eat a salad and talk about it.

When you do your set you said you prefer it very scripted, and in your animation work you get given a written script for your lines, how is that experience different for you than when you work with your own material and perform live?

Yeah! Voice-over work is super simple, you just read it, unless they ask you or want you to improvise. If I know the show likes to improvise I write things in the script, ideas and stuff like that before I go. I think Chris Rock said something like it’s the easiest job in the world. In the world! In the known world, the world that I know. It is a delight and I will never not be grateful for it.

For stand-up, what are some of the bigger challenges that people might not realize are part of the job?

Just self motivation. Just like any small business owner. You gotta know, “Why am I doing this?”. Always remembering why I care, because that’s what really matters. I want to do something that I’d want to do even if I wasn’t getting paid for it. But it’s nice to get paid for it.

What’s one of the most fun things about getting to do stand up?

All the venues are totally different, especially in LA or New York! Like, at this venue it’s really fun when you’re waiting to get ready to go up you can go through the books. At Flappers when I headline it’s usually a crowd of people who like my stuff and it makes you feel good.

It’s interesting to go through the night and do four different shows and they’re all different experiences. There was one sour-faced young lady, in the front row, with bright red lipstick. Boy, she is expressing herself with her face! The audience needs to realize the performer totally sees you. I need to know what’s happening with your face, people are hustling out there and if you can keep your face flat, just take it to the back. Don’t sit in the front and give me flat-face, that’s not fair.

In your routines, even in tonight’s set, you sometimes talk about dealing with mental illness and have done work as an advocate speaking on the issue in the past. Do you think that it is a topic that the comedy community is especially attuned to?

There are lots of resources out there. I have gotten help my entire life and I kinda would want to see that be a more normal thing for people. There’s always a chance that they can come up with a medication that will help out, I didn’t think that they would be, it took a long time but I feel better than I ever have now. But I also get why people become depressed or commit suicide, it sucks, it’s unbelievable the psychic pain that people live through.

I’m obviously anti-suicide but, I mean for me I found something that worked within a year, but had it been 2 years, 4 years, 10 years of ups and downs… It’s miserable, it’s really hard. But really, go to the hospital, there is no shame in going in there. You get free graham crackers, and usually a free pair of socks interestingly enough, and you might meet a comedian!

Do you feel that doing stand up is a positive and helpful experience for you?

Sure! It’s a fun experience for me because it’s super creative but it’s also very calming, there’s something about it. It’s fun when you’re performing and the audience is really supportive of the work, and the work grows and it’s really exciting! Of course is audience doesn’t like it then it can be extremely painful. I try to avoid that. And it’s pretty easy to avoid that, you just go to the back of comic book stores, that’s where the love is. 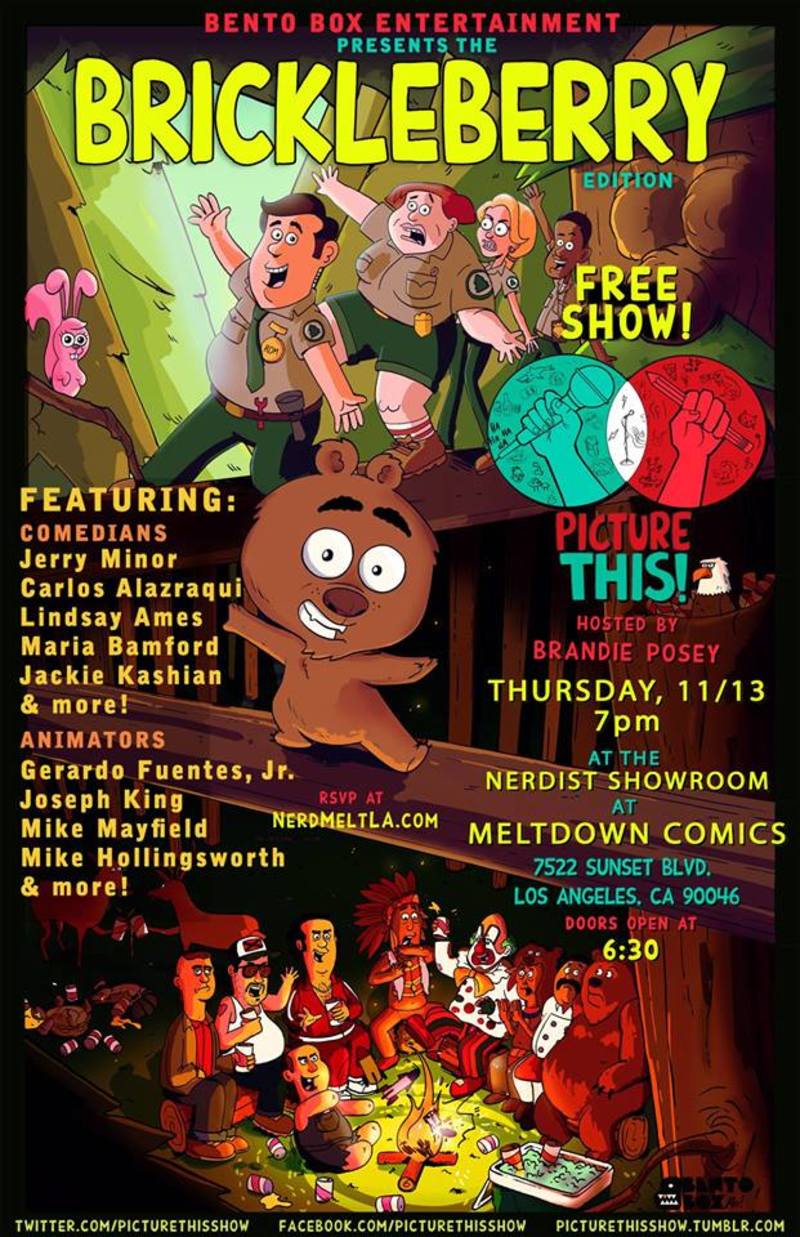