Two drug dealers (John Corbett and Steven Bauer) want to aquire larger real estate from aged dealer William Spinks (John Savage), so they get a woman named Sadie Hill (Gillian Jacobs in a dual role) he’s been pining for to set up a deal to sleep with him. After the deal is made, Sadie accidentally gets killed by a falling chandelier.  Their new task is to find a lookalike to try and pass off to Spinks who’s so old it might just work.  They enlist the help of another dealer/ex-basketball player/club-owner/aspiring food network chef Joe (Jerry O’Connell) to find another girl. In the meantime Joe runs into a one-legged, deaf beauty named Mila (Scottie Thompson) in the restroom and becomes smitten.  Mila has her own secrets as in her cancer has just returned and she’s planning on ending her life fairly soon.  They share a wonderful night together and he tells her he wants to see her every day, which delays her plans.  Meanwhile coke-head actress Lacey (Gillian Jacobs again) is being forced by a detective (Gina Gershon) to get some dirt on Holt. She goes to Joe’s place to find his coke-head brother Holt (Justin Long). He invites her in so that she can wait for Joe, but she ends up falling for Holt. The next day Holt runs into a loan shark (Luis Guzman) who beats the crap out of him and tells him he owes 100k and will be killed if he doesn’t deliver soon. The two dealers from the beginning search high and low for a lookalike, and their first go-to is a strip club with two girls named Dakota.  In this jumbled mess of characters, Holt delivers Lacey who agrees to be the lookalike, but then Mila gets involved and things go all screwy.

The Good: The plot is somewhat fun and twisty. The characters are likeable. The ensemble cast is decent. Scottie Thompson is the star of the film. She blows everyone else out of the water. The two strippers named Dakota scene was the only laugh out loud moment.

The Bad: Like I said before, it’s a jumbled mess. Too many characters spoil the broth.  Jerry O’Connel’s Joe is too sweet a character to be involved in drug dealing, and he feels out of place.  How convenient to find a girl who looks just like the dead girl in the same town and involved in the same crowd. At least when Mila steps in, it’s a little more believable because she’s not an exact match, but believable to the villain Spinks.  They could’ve had a stand-alone film with Mila’s tragic character. Her storyline was however too close to Autumn in New York/Sweet November but with a violent ending.

The Lookalike was entertaining, but confusing and some scenes just dragged. It’s an okay date-night film or time killer, but the ending is a little irksome and flat. 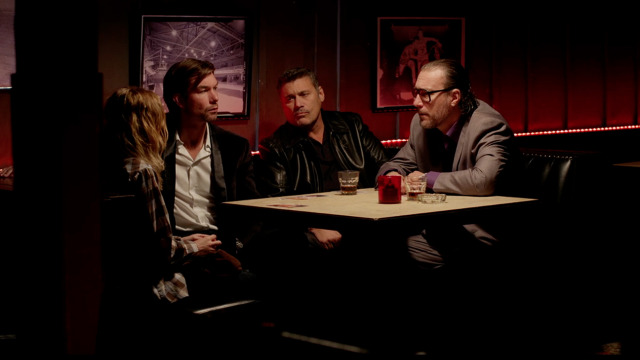