Kevin Costner and Octavia Spencer have embarked in a custody battle in the new official trailer in their latest film, ‘Black or White.’ Relativity Studios, which has just released the movie in a one-week qualifying run in L.A., has unveiled the drama’s trailer. The clip showcases a child’s maternal grandfather and paternal grandmother as they embark on their own respective legal pursuits to assume care for their beloved granddaughter, and how in two seemingly different worlds, nothing is as simple as black or white.

The ‘Black or White’ trailer follows Costner’s character, Elliot Anderson, as he tells his granddaughter, Eloise (Jillian Estell), to make sure she brushes her teeth, and she encourages him to put more emotion into his discipline. As scenes of Elliot caring for his granddaughter then flash across the screen, he narrates that he and his late wife (Jennifer Ehle) began caring for Eloise after their daughter died. After his wife also passed away, he noted that he embraced taking care of their granddaughter on his own.

When he’s asked if Eloise’s paternal grandmother, Rowena (Spencer), should be called to come take custody of their granddaughter, Elliot insists seeing her is the last thing she needs. But Rowena shows up at Elliot’s house anyway, asking if he has plans on how he wants to take care of their granddaughter. She also reminds him she has extended family that lives near her, who can help raise Eloise.

Rowena mentions the idea of shared custody, and the fact that her son is able to raise his daughter. But Elliot points out that Eloise’s father isn’t the greatest role model, as he continues his pursuit to retain full custody. While Rowena believes Elliot just wants to keep Eloise away from her side of the family, he insists he wants their granddaughter to have stability. He adds their custody battle isn’t about race; it’s about doing what’s right for Eloise.

‘Black or White’ was written and directed by Reign Over Me scribe and helmer, Mike Binder. Besides Spencer, Estell, Ehle and Costner, who also served as one of the producers on the drama with the writer-director, the film also stars Bill Burr, André Holland, Gillian Jacobs and Anthony Mackie.

The following synopsis for ‘Black or White,’ which had its world premiere in September at the Toronto International Film Festival, has been released by Relativity Studios:

‘Black or White’ is the story of a grandfather (Academy Award winner Kevin Costner) who is suddenly left to care for his beloved granddaughter. When the little girl’s paternal grandmother (Academy Award winner Octavia Spencer) seeks custody, a legal battle ensues that forces the families to confront their true feelings on race, forgiveness and understanding. Anchored by an all-star cast and based on real events, the movie is a look at two seemingly different wolds, in which nothing is as simple as black or white.

Watch the trailer for ‘Black and White’ below. For more information on Black or White, visit the drama’s Facebook and Twitter pages. The film opens in theaters nationwide on January 30, 2015. 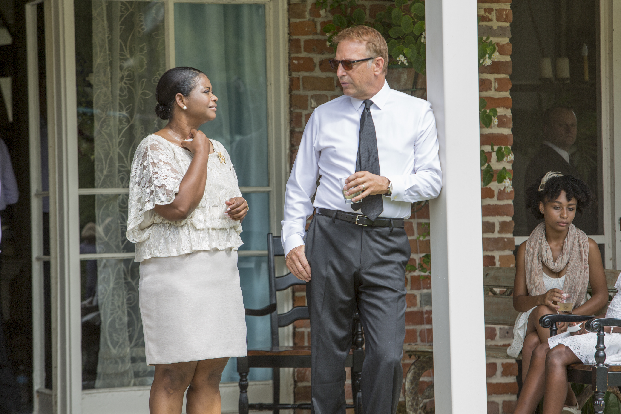