Title: Night at the Museum: Secret of the Tomb

People often easily embrace the natural and intriguing relationships in their lives, and can start taking advantage of the belief that their connections will never be affected by anything in the world around them. It’s not until their beliefs and ideals change, due to their natural maturing and reactions to challenges around them, that they are finally forced to contend with the knowledge that everyone has to let go of those they love at some point. That relatable dynamic between family and friends is engagingly presented in the new family adventure film, ‘Night at the Museum: Secret of the Tomb.’ The comedy captivatingly explores the realities of learning how to accept these relationship changes; not only does the main character have to cope with his teenage son leaving home for the first time and the possible loss of his connection with his friends at work, but the series’ returning director, Shawn Levy, and stars also had to struggle with the ending of the beloved trilogy.

‘Night at the Museum: Secret of the Tomb’ follows Larry Daley (Ben Stiller), the hard-working night guard at New York’s Natural History Museum after he was recently promoted to the position of the director of nighttime operations. However, his job doesn’t go as smoothly as he planned, as his latest highly-publicized event showcasing the special effects associated with the museum’s diverse displays receives negative publicity. Following an unexpected glitch with the tablet of Ahkmenrah (Rami Malek), whose magic brings all of the exhibits to life at night, the displays begin to unexpectedly attack the people in the audience. Dr. McPhee (Ricky Gervais), the curator of the museum, is subsequently fired for not maintaining control of the exhibits.

To help figure out why the tablet is no longer working effectively, and to help Dr. McPhee get his job back, Larry travels with some of the more prominent exhibits, including Theodore Roosevelt (Robin Williams), Jedadiah (Owen Wilson), Octavius (Steve Coogan), Attila the Hun (Patrick Gallagher), Sacagawea (Mizuo Peck), the new Neanderthal Laa (Stiller in a dual role) and Dexter the Capuchin Monkey to the British Museum. Upon their arrival in London, and aided by Larry’s teenage son, Nicky (Skyler Gisondo), the group sneaks past the night guard, Mindy (Rebel Wilson), to find Ahkmenrah’s father, Merenkahre (Ben Kingsley). As a powerful pharaoh and the tablet’s creator, he’s the only one who can reverse its deterioration, and save the exhibits’ ability to come alive at night.

However, Larry and his group face continuous challenges as they search for Merekahre throughout the night, as most of the exhibits in the British Museum are coming to life for the first time. One of the main British exhibits that initially helps Larry and the American attractions is Sir Lancelot (Dan Stevens), whose strong physical capabilities helps the group defeat their opponents. But when he realizes the table can help him find and reunite with his long lost love, Guinevere, Sir Lancelot selfishly wants to only use it for himself. With every passing moment taking away the American exhibits’ ability to remain alive, Larry must firmly take a stand to find a way to restore the tablet, so that he can save and protect those he has come to consider to be his friends.

The last installment in Levy’s hit adventure trilogy enthrallingly put a sentimental spin on the importance of family relationships and supporting each other, no matter what obstacles or differences in opinions they may face together. The screenwriters of ‘Night at the Museum: Secret of the Tomb,’ David Guion and Michael Handelman, are two of the new additions for the series. But after they co-scribed the comedies ‘Dinner for Schmucks’ and ‘The Ex’ together, they powerfully embraced and clearly understood the director’s desire to have the latest entry be the culmination of the themes of the two earlier films.

While much like its predecessors in effortlessly garnering laughs through its stunning action sequences featuring the exhibits as they come alive, ‘Night at the Museum: Secret of the Tomb’ sentimentally focused on fathers and sons learning how to appreciate each other’s opinions and decisions, and learning how to say goodbye. One of the most enthralling parent and child relationships in the series’ second sequel is the one between Larry and Nicky, as the teen is finally ready to explore the world on his own. While the two argue over Nicky’s plans after he graduates from high school, and how they can affect his future, both realize they need the freedom to make their own choices, and learn from their mistakes.

While the comedy’s story amusingly and emotionally chronicles the characters’ challenges in accepting change and letting go of those they love, not only in Larry and Nicky’s relationship, but also with the museum guard’s bond with the exhibits as they start to lose their ability to come alive, the visuals of ‘Night at the Museum: Secret of the Tomb’ were the most engaging parts aspects of the story. Production designer Martin Whist, who has previously worked on such stunt and effect-driven films as ‘Warm Bodies’ and ‘Super 8,’ cleverly utilized the film’s shooting locations and sets to smartly emphasize the continuously harrowing situations Larry and his team face through the series’ final installment.

The designer immediately draws audiences in with his re-construction of the Main Hall and Rose Center Planetarium at New York’s Natural History Museum, in which Larry showcases his highly publicized special effects event as the newly-appointed the director of nighttime operations. While the event is filled with guests who are watching the exhibits come to life in amazement, Whist created an illuminating, expansive environment with high ceilings and elegant staircases, where the exhibits naturally roamed freely to showcase their natural personalities. Whist and his art department also impressively maintain the distinct look of each of the exhibits in the British Museum when the film began shooting in London. From the alluring Ancient China exhibition, where Larry, Nicky, Sir Lancelot and the rest of their group fights dragons as they try to locate Jedadiah and Octavius, after they were lost during their battle with one of the museum’s dinosaurs, to the destructive Pompeii exhibit where the two ultimately find themselves, Whist cleverly created intriguing and alluring locations in both museums.

While ‘Night at the Museum: Secret of the Tomb’ impressively maintained the enchanting visual effects of its two predecessors, including the stunts, costumes and most notably Whist’s stunning locations, the final installment in Levy and Stiller’s trilogy also captivatingly infused a relatable life lesson that will surely resonate with viewers. The film sentimentally explores the challenges of accepting change and letting go of loved ones for their own good. From Larry reluctantly accepting the idea that his son is maturing enough that he can start making his own decisions, to the night guard grudgingly contending with the fact that the exhibits are losing their magic and may no longer come alive, the comedy explores the daunting prospect of losing the all-important connections in your life. But while on their epic adventure together to the British Museum, the group powerfully realizes that while situations change, the bonds that hold together their most important relationships will never waver. 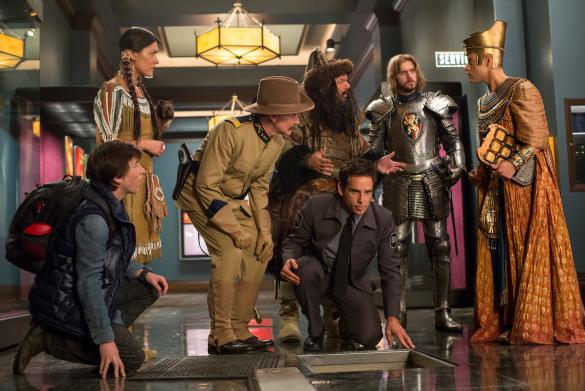