Title: Into the Woods

Fairy tales are often passed down to young children as an enthralling and captivating source of amusing entertainment, but rarely do they passionately explore what truly happens to the characters once they achieve their happily ever after. So acclaimed film and Broadway director Rob Marshall, who has brilliantly chronicled the human condition and motivations in his previous projects, including the Academy Award-winning 2002 musical ‘Chicago,’ once again movingly explored contemporary themes through classic characters in his new film adaptation, ‘Into the Woods.’ Through the modernly relatable perspectives of such fairy tale characters as Cinderella, the title character from Jack and the Beanstalk, Rapunzel and Little Red Riding Hood, the fantasy film, which is based on Stephen Sondheim’s celebrated 1988 Broadway musical of the same name, serves as a cautionary tale. The family movie cleverly warns about the consequences of people actually getting everything they think they want, and giving into society’s expectations.

‘Into the Woods’ follows the desires and motivations of a diverse set to fairy tale characters in a far off Kingdom. The Baker (James Corden) and his Wife (Emily Blunt) yearn to have a child, but don’t understand why they haven’t been able to until their next door neighbor, the Witch (Meryl Streep), stops into their shop. She explains that when the Baker was a child, she caught his Father (Simon Russell Beale) stealing magic beans from her vegetable garden. As punishment for losing the garden’s precious beans, the Witch was placed under a curse which made her hideous in appearance. The Witch, in turn, cast an evil spell on the Baker’s household, cruelly insuring that his family would never be able to have any more child.

The Witch tells the couple they can reverse the curse if they venture into the Woods and collect the four ingredients which will both reverse the spell and restore her beauty. The Baker and his Wife must return with a cow as white as milk, hair as yellow as corn, a cape as red as blood and a slipper as pure as gold, before the blue moon rises in three days’ time, which only occurs once every 100 years.

As the couple journey into the Woods, they meet Cinderella (Anna Kendrick), who’s fleeing the Palace in a pair of gold slippers; Little Red Riding Hood (Lilla Crawford), who’s wearing a red cape as she makes her way to Granny’s house while being pursued by the Wolf (Johnny Depp); the fair maiden Rapunzel (MacKenzie Mauzy), who’s being held captive by the Witch in a tower with no doors; and young Jack (Daniel Huttlestone), who’s traveling to the market to sell his cherished cow, Milky-White, to appease his exasperated Mother (Tracey Ullman).

As the third midnight approaches, the Baker and his Wife finally produce all four of the required ingredients through bribery and deceit, and deliver them to the Witch. Soon the Witch’s curse is lifted, which returns her coveted beauty. The Baker and his Wife are then magically given the child they so longed for. Cinderella is also able to break free from her evil Stepmother (Christine Baranski) and stepsisters Florinda and Lucinda (Tammy Blanchard and Lucy Punch), and marries her Prince Charming (Chris Pine). Rapunzel is freed from exile by her Prince (Billy Magnussen), while the giant beanstalk which sprouted from the magic beans Jack received in exchanged for his cow, has led to riches beyond his Mother’s wildest dreams.

However, just at the moment of happily ever after, a terrifying, vengeful Lady Giant (Frances De La Tour) climbs down from the beanstalk, wreaking destruction on the Kingdom, the surrounding village and the enchanting forest. Forced to face the consequences of their desires, the group of characters who have befriended one another in the Woods, must come together and take responsibility for their actions before they can defeat the Giant. Only then will they discover the significance of each of their individual journeys.

With a diverse, intelligent and stunning cast of talented actors, several performers grippingly garnered the most memorable attention for their respective portrayals of their relatable characters, who they brilliantly humanized. Streep, who has been nominated for her 29th Golden Globe, with a nod for Best Supporting Actress-Motion Picture for her role as the Witch, cleverly brought an intelligence and understanding to why her character placed a curse on the Baker’s family. While the Witch is driven by vanity and a desire to make to feel the same pain she’s feeling for having the thing she cherishes most in life taken from her, she also seeks companionship, after being shunned by the Kingdom and the surrounding village. The actress effortlessly and enthralling offers to reverse the curse on the Baker and his Wife so everyone can get what they want, even though the process may cause Rapunzel to turn on her after she discovers her deceit.

Kendrick was also smartly cast in her respective role as Cinderella in the family musical film adaptation. While the fairy tale princess is often portrayed and represented as a flawless, perfect victim who has unfairly fallen victim to her cruel stepmother and stepsisters following her father’s death, the Tony Award-nominated actress rightfully steered clear of the predictable archetype often associated with the character. Through an impressive independence and modern sensibility, Kendrick infused her character with a clever and strong sense of pride that allowed her to take action to go after what she wants. Whether Cinderella’s drawing on her love for her deceased mother to muster the means to attend the Prince’s Festival, or the courage to help the Baker, Little Red Riding Hood and Jack fight the Giant, she finally finds her voice and ability to go after what she wants. But her modern sensibility also allows her to admit when she’s made a mistake, and gives her the bravery she needs to correct her errors.

‘Into the Wood’s production designer Dennis Gassner diligently worked closely with Marshall to create entrancing and distinct settings that powerfully reflect the diverse characters’ distinct lifestyles, desires and motivations. The director decided to shoot the fantasy film on location in England as much as possible, as the country’s captivating landscape, which includes picturesque castles, manors and forests, allows everyone from the Baker and his Wife to Cinderella, Little Red Riding Hood, Jack, Rapunzel and even the Witch, to believe their dreams are obtainable.

For example, Gassner creatively utilized the historic forest of the Ashridge Estate on the outskirts of Berkhamsted, as the setting for the song Giants in the Sky, which Jack ecstatically sang after his handful of beans produced a magical beanstalk. The notable wildlife area passionately reinforced the young boy’s desire to finally provide a fulfilling and enriching life for his mother, after they endured continuous financial struggles. With the majority of the fantasy film’s story taking place in the title woods, the production designer also utilized the impressive oak trees and thousands of acres of forest of Windsor Great Park, which is located on the border of Berkshire and Surrey. The trees offered a calming refuge for the naïve and innocent Little Red Riding Hood, who not only utilized them to hide from the menacing Wolf, but also as a sanctuary where she bonded with her Granny.

Fairy tales often capture the kindness and humble nature of those compassionate enough to always put others’ needs in front of their own, and how they’re rewarded for their sympathetic nature at the end of the story. But with their truly realistic film adaptation of the Tony Award-winning musical, ‘Into the Woods,’ Marshall and screenwriter James Lapine, who also wrote the play’s book, daringly infused the often uplifting and inspiring genre with a true relatability. While the fantasy movie does maintain the play’s empowering message that people aren’t alone in their often unstable world, which offers them a glimmer of hope that their lives can powerfully improve, the film also enthrallingly incorporates a modern twist on the genre. With the notable performances by the enchanting cast, most notably Streep and Kendrick, as well as Gassner’s unique and organic production design, ‘Into the Woods’ courageously examines complex contemporary themes, including the consequences of wishes, the parent/child relationship, greed, ambition, loss and the power of the human spirit. 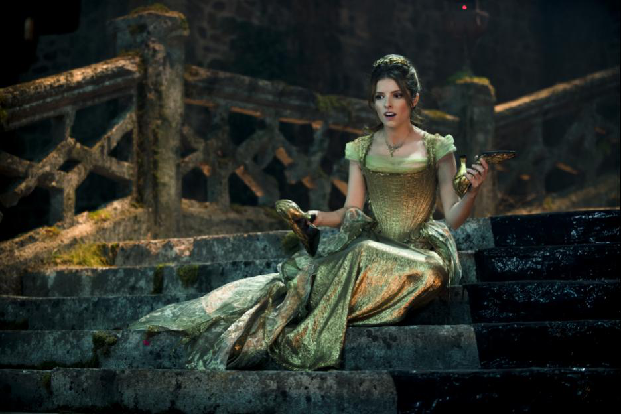