Title: A Most Violent Year

People who achieve their professional and personal goals after years of hard work and determination can appear to have the best and most exhilarating lives. But there are times when even the most moral and upstanding leaders in the community, who superficially appears to have the ideal life that everyone else aspires to emulate, can have the most unnerving problems they must contend with in order to maintain their true happiness. That insightful exploration into how far someone will go in order to protect their seemingly cherished lifestyle, even during the aftermath of grippingly frightening crimes, is enthrallingly presented in writer-director J.C. Chandor’s latest drama, ‘A Most Violent Year.’

Set in New York in 1981, one of the most dangerous and crime-ridden times in the city’s history, ‘A Most Violent Year’ follows the struggles of Abel Morales (Oscar Isaac), the young owner of an independent heating-company, Standard Heating Co. He tries to garner success in an industry that’s led by generations-old family businesses. He continuously tries to remain honest and genuine in his transactions with his customers, as he doesn’t want to partake in the illegal activities that his business typically thrives on, especially since his wife, Anna (Jessica Chastain), is the daughter of the Brooklyn mobster who originally owned the company. His determination to remain legitimate intensifies after she realizes that other local oil suppliers are most likely responsible for hijacking his trucks and stealing his product.

Since Abel doesn’t initially know who’s accountable for the thefts, he decides to move forward with a major deal for one for New York’s top oil holding facility. Accompanied by his lawyer, Andrew Walsh (Albert Brooks), Abel leaves a considerable deposit, and must pay the balance within 30 days to secure the sale.

As Abel searches for a way to stop the hijackings of his trucks and a way to obtain the rest of the money for the sought-after and valuable water-front property, he and Anna are targeted by the politically driven assistant D.A. Lawrence (David Oyelowo), as he launches a massive investigation into heating-industry misconduct. The city official charges the couple and their company with multiple offenses, including fraud and altering their financial books. But Abel is determined to prove to everyone in his life, including the ADA, the criminals stealing his oil and the people with whom he’s negotiating with on the waterfront property, that he’s innocent of the charges against him, as he’s living an honorable life and is in charge of a respectful business.

Much like his Academy Award-nominated 2011 thriller, ‘Margin Call,’ Chandor created a tantalizing exploration into the gripping legal and personal effects a harrowing crime has on the people directly and indirectly involved in ‘A Most Violent Year.’ With Abel unwavering in his decision not to resort to violence to stop the hijackings during the dangerous period in New York City, even though Andrew and many of his associates believe it may protect his business, the filmmaker once again smartly emphasized the need to logically and respectfully resolve all moral and legal situations. Much like his first drama, the filmmaker crafted a powerful character study that explores how a daunting situation makes everyone evaluate their priorities, which can dishearteningly lead to disastrous results, in his latest movie.

Isaac was perfectly cast as the enthralling and morally driven Abel, whose actions were captivatingly driven by his conscience, instead of a strong determination and will to utilize any means necessary to achieve his goals. With the complex protagonist caught between his drive to most past his humble beginnings as a truck driver for the oil company after he immigrated to America, and his resolve to solely rely on legal means to continually grow his financial returns and keep Standard Heating Co. successful, the actor effortlessly exuded his character’s honorable personality and willpower, even during his most unnerving situations.

The commanding moral conscientiousness Abel strikingly held dear as he contended with the daunting situations around him, from his company’s truck drivers being hijacked at gunpoint, to Anna being upset that he can’t fully protect their family from their rivals, and needing to secure the full amount of money he needs to buy the waterfront property on time, was visually upheld by cinematographer Bradford Young. The Director of Photography, who has won the Cinematography Award, U.S. Dramatic, twice at the Sundance Film Festival, smartly infused ‘A Most Violent Year’ with dramatically rich and vibrant colors that were skillfully mixed with shadows to emphasize what a heightened sense of reality the Morales family was living in.

The captivating colors Young infused into every scene highlighted the affluent lifestyle Abel and Anna wanted to maintain for themselves and their daughters, as they set out to prove to society that they’re happy and financially comfortable. But the shadows the cinematographer also often utilized during pivot moments Abel has during his journey to continued success, from his anxious car ride home with Anna from a dinner they had with their bankers to convince them they’re still worthy customers, to the tense conversations they had in their home about how to best protect their family, are a clever physical chronicle of the tumultuous obstacles the troubled protagonist is forced to overcome.

Chandor once again crafted a stimulating, thought-provoking exploration into how the aftermath of crimes that have been committed out of greed and the drive of personal advancement powerfully influence everyone directly and indirectly involved, even the innocent, in his latest drama, ‘A Most Violent Year.’ Between Isaac’s captivating rendering of the morally driven Abel, who would take any legal means necessary to keep his oil company thriving and his family safe and taken care of, and Young’s natural-driven cinematography that enthrallingly accentuates the protagonist’s captivating reality, the writer-director once again crafted a powerful character study. While the daunting situations Abel finds himself in throughout the film have the potential to create devastating results, the drama also smartly showcases how such conflicts can make everyone evaluate their priorities, and strive to live a better life. 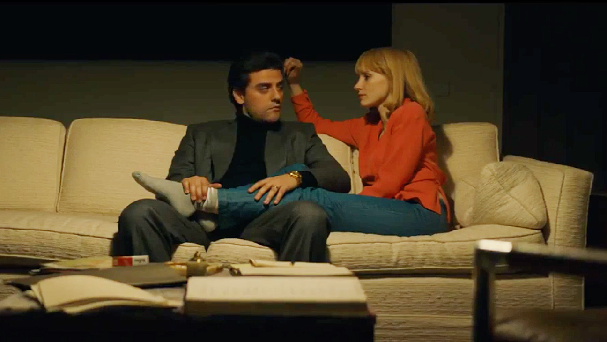