The often perplexing debate about the nature of fate and free will is a harrowing idea that often leaves people of all backgrounds and beliefs questioning and searching to find out if destiny is truly real. That mystifying examination is captivatingly explored in intriguing detail in the new action thriller, ‘Predestination,’ the latest sci-fi film from writer-directors Michael and Peter Spierig (who are also known as The Spierig Brothers). The movie, which reunites the filmmakers with their ‘Daybreakers’ star, Ethan Hawke, visually and emotionally explores the reasoning into why things feel like they’re inevitable, while at the same time people’s future seem as though they have endless opportunities.

‘Predestination’ follows the intriguing life of the entrancing narrator, a Temporal Agent (Hawke) who is one of the select few who can time travel for a secretive organization, known as the Temporal Bureau. His current mission, which will serve as his last before his retirement, is to stop the Fizzle Bomber, the only terrorist who has ever eluded the agency, from unleashing a bomb in New York in 1975. Someone, presumably the agent, tries to deactivate the latest explosive rigged by the infamous bomber in 1993, but it blows up in his face, and forces him to undergo reconstructive surgery.

The agent is then seen working undercover as a bartender during the mid-1970s, as the news of the Fizzle Bomber’s ever-increasing terror is eliciting so much fear in New Years that they’re leaving Manhattan. During the city’s increased awareness of the extremist, the Temporal Agent begins a conversation with a customer, who refers to himself by his pen name, “the Unmarried Mother.” The writer, who pens popular “confessional” stories for magazines, tells the curious agent he has garnered so such intuition into women’s minds, as he was born as a girl, and was left on the doorstep of a Cleveland orphanage in 1945.

After being named Jane by the hospital’s nurses, she’s raised in the orphanage, and realizes she was never adopted, or accepted by her peers, because she was different. After developing an unusual physical toughness and excelling in her studies as a teenager, Jane is considered to be an ideal candidate for the 1960s government space program Space Corp., which provides woman as comfort to male astronauts while they’re on missions. But she unexpectedly fails one of her physical exams, after which she’s disqualified from the program. Jane then meets one of the leaders of Space Corp., Mr. Robertson (Noah Taylor), who initially appears unforthcoming and distant to her true needs, but proves to be an important ally later in her life.

The Unmarried Mother also reveals to the Temporal Agent that as he was trying to readjust to life after being forced out of Space Corp. when he was still Jane, she was seduced and abandoned by a young man, who she fell in love with and left her pregnant. After she gives birth to their daughter, her doctor reveals that she was actually born with both male and female internal reproductive organs, and complications from her surgery require her to transition fully into a man. Hoping to give him the chance to avenge his abandonment by the man Jane fell in love with, as well as her harrowing medical experience after she gave birth, the Temporal Agent offers the Unmarried Mother the opportunity to go back in time and alter his past. However, the writer’s time travel not only modifies his own life, but also everyone he has been in contact with, as well as the entire city of New York.

The Spierig Brothers powerfully captivated audiences by infusing the action-driven sci-fi thriller with commanding insight into the harrowingly realistic emotions of the Temporal Agent and the Unmarried Mother as they both set out to positively change the mistakes that have been not only been brought down on them, but also society as a whole. While the agent is obsessed with finding and stopping the Fizzle Bomber before he can unleash his deadliest terrorist attack to date, the writer-directors also smartly chronicled the frequent internal questioning he debated over whether he made the right decisions in his professional and personal lives. The Unmarried Mother, meanwhile, readily accepts the agent’s offer of going back in time to uncover answers about why the man Jane loved left her, and how having the confidence from being loved could have supported her to do great things. The troubled protagonists’ enthrallingly and cleverly developed backstories that not only offered an intense and unique explanation into how they continuously embarked on life-threatening missions to find the elusive bomber, but also why they accepted their jobs to begin with, and why they have such tainted views on relationships and connections.

The intriguing examination into the emotional motivations of both the Temporal Agent and the Unmarried Mother as they determinedly travel amongst different eras to find their true meaning and mission in life was powerfully emphasized by the stunning visuals of ‘Predestination,’ particularly the sci-fi thriller’s production design by Matthew Putland and cinematography by Ben Nott. With the Unmarried Mother thoroughly detailing many details of her childhood and adolescence, and the Temporal Agent embracing every detail of his surroundings as he relentlessly searched for the Fizzle Bomber, the Spierig Brothers closely worked with both Putland and Nott to give time period its own palette and design, in a clever effort to showcase the complexities of each era. From the de-saturated, muted greens of the orphanage where Jane lived as a child in the 1940s, to the vibrant blues and silvers of the Spacecorp. offices where she tried to launch a meaningful science career in the ‘60s, as well as the monochromatic, neutral and more modern browns of the temporal Agent’s office and apartment in the ‘80s and ‘90s, all of the eras showcased throughout the sci-fi thriller appeared enthrallingly enticing to the protagonists’ persistent searches.

The complexly paradoxical themes that intriguingly drive the Temporal Agent and the Unmarried Mother’s mutual need to find answers, meaning and closure in their respective life mysteries not only made ‘Predestination’ visually captivating throughout its non-stop action sequences, but also explore the significance of how a person’s life experiences truly shape their decisions and future. The Spierig Brothers powerfully incorporated stunning visual effects, led by the versatile Putland and Nott, into a captivating sci-fi time travel story that also smartly incorporates its main characters’ emotions and motivations into the thought-provoking story about the true meaning and purpose of life. 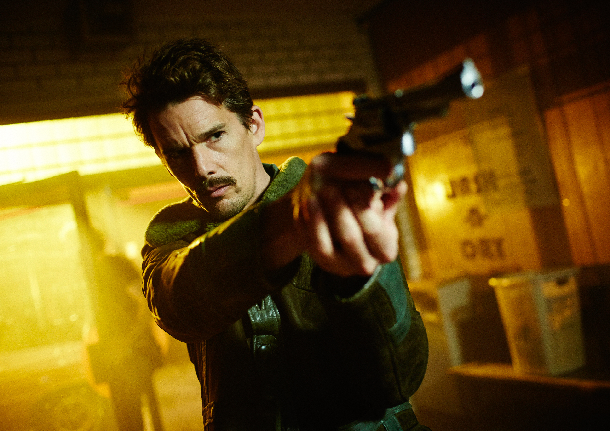