Title: The World Made Straight

The tantalizing and superficial emotional and physical landscapes that are initially introduced in any story makes audiences immediately feel as though they truly know all of the emotions, motivations and ideas of all the characters involved. But ‘The World Made Straight,’ the new drama that marks the feature film directorial debut of ‘Survivor’ producer David Burris, and is adapted from Ron Rash’s 2006 novel of the same name, is the perfect example of how initial appearances aren’t always an adequate representation of how people and situations truly are overall. Through intriguing and sincere performances by the lead actors, as well as a reflective and meaningful visual environment that was stunningly presented through an insightful production design, emphasize how even the direst circumstances can lead to a positive change in people’s lives.

‘The World Made Straight’ follows 17-year-old high-school dropout Travis Shelton (Jeremy Irvine), who’s struggling to find purpose in his life in his poor rural Appalachian town in western North Carolina in the late 1970s. After he’s fired from his supermarket cashier job when he sympathizes with a poor customer and tells him to leave without paying, he’s once again criticized and emotionally abused by his father, Harvey (Alex Van), who tells him he’ll never succeed in life.

When Travis decides to go fishing one day, in an effort to escape his father’s relentless disapproval, the teen discovers a garden of marijuana plants, and believes selling them will provide a way for him to make money quickly and easily. His friend Shane (Haley Joel Osment) introduces him to Leonard (Noah Wyle), a former local teacher who was disgraced in the community and within his family a few years ago, after his arrest. Leonard agrees to buy the drugs from Travis, but advises him to stop engaging in dangerous situations while he still can. However, the teen doesn’t listen, and returns to steal more of the marijuana plants. In the process, he steps in a waiting bear trap and is caught by the drug’s growers, Carlton Toomey (Steve Earle) and his son, Hubert (Marcus Hester), who warn him to stay away from their business

Travis’ leg wound requires him to stay in the hospital for a few days, where he reunites with student nurse Lori (Adelaide Clemens), who he attended school with when they were children. After the two agree to spend time together after he’s released, Travis comes to discover his parents think it’s better if he doesn’t return home. So he asks Leonard is he can stay with him in his trailer, even though the former teacher is already living with his drug-addict girlfriend, Dena (Minka Kelly). While Leonard is initially hesitant of his new living arrangements, he comes to view Travis as a son, and even encourages him to get his GED. The two come to bond, much to Dena’s dismay, as they realize they have a common interest in their families’ histories, particularly during the Civil War. Even as Carlton and Hubert cause more trouble for Travis, Leonard and Dena, the teen and the older man he has come to idealize are determined to stick together and make a better life for themselves.

The well-cast actors in the harrowingly gripping drama powerfully embodied the pain and emotional turmoil that screenwriter Shane Danielsen elegantly adapted from Rash’s novel. Irvine and Wyle gave the most passionate and sentimental performances in ‘The World Made Straight.’ Both performers agonizingly reflected on their characters’ pasts, particularly the harmful mistakes they made, and the renewed hope they’ve recently mustered during their reflective time together.

Irvine powerfully transformed Travis into finally realizing that he doesn’t have to lead the same meek and modest lifestyle as his father. The once troubled young protagonist truly set out to improve his life, after he not only diligently researched the bravery of his ancestors, but also finally realized the importance of studying for school, under the guidance of Leonard, an adult who finally cared for him.

Wyle also intriguingly presented his complexly complicated anti-hero, who has enthrallingly learned to accept the condemned reputation he has garnered from the community since he lost his teaching job. Leonard is presented to be on a powerful trajectory over the course of the drama, as he finally accepts that the drug dealing route he has embarked on in recent years has not only further damaged his reputation, but also continued to suppress his feelings of self-acceptance and worth. The Emmy Award-nominated actor enthralling emphasized how his character’s new relationship with Travis, in which he provides meaningful guidance and support to the teen, finally allows him to accept his truly self-deprecating attitude. While pushing Travis to embrace the growing maturity within himself, Leonard is ultimately also realizing he can provide a better and more stable lifestyle for himself and Dena.

The lead actors’ fascinating performances as the struggling protagonists determinedly trying to escape the injustices of their small town were captivatingly highlighted by ‘The World Made Straight’s production designer, Russell Barnes. He perfectly and intriguingly showcased the harrowing environments that strongly influenced the drastic and life-altering decisions the characters made throughout the drama. The cramped, tattered trailer that Leonard shared with Dena in the woods, for example, which was overly confined with the former teacher’s countless history books and mementos from his past, stood in stark contrast to the spacious and luxurious home he lived in with his former wife and their daughter, which was shown through several flashbacks. Barnes also intriguingly emphasized the same unpretentious environment Travis grew up in through the meager and simple home he grew up in. The mere, rundown home made the young teen appreciate the plentiful and diverse belongings Leonard collected in his trailer, most notably the countless books about his ancestors.

‘The World Made Straight’ intriguingly relies more on its distinguished performances that grippingly showcase the prolifically realistic protagonists as they emotionally reflect on their mistakes, as opposed to long sequences of brutal violence, that forces them to rethink their decisions, and renew their hope that they can positively change their lives. Irvine and Wyle give captivating performances as two hapless, ill-fated anti-heroes who captivatingly realize through their surprisingly positive influence over each that they can truly help each other improve their lives. Combined with the brilliantly realistic production design Bares created that powerfully reflects the gripping personalities and emotions of Travis, Leonard and the other characters, the drama is an emotional, thought-provoking adaptation of Rash’s book. 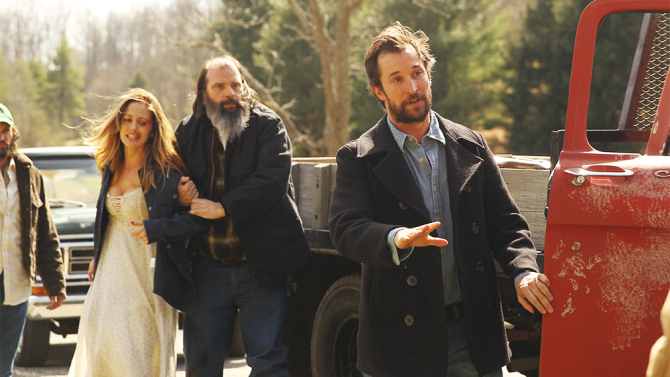