Making friends in a new place can be a difficult thing. For a young couple with a young son, that can be even more challenging. When seemingly perfect people present themselves, the joy of finding kindred spirits, or at least just genuinely nice friends, can overpower everything else. Alex (Adam Scott) and Emily (Taylor Schilling) are thrilled when their son meets a new playmate in the park and his father Kurt (Jason Schwartzman) introduces himself to the couple and invites them over for dinner. Little do they know what it is that is in store for them.

Scott and Schilling are two actors who have made their careers recently with television performances. Scott plays nerdy political behind-the-scenes man Ben Wyatt on NBC’s departing Parks and Recreation, and Schilling is sarcastic prison inmate Piper Chapman on Orange is the New Black. Those performances are helpful in preparing for The Overnight since the two portray variations of those roles in the film. Scott’s Alex is much less confident without a Leslie Knope by his side to affirm his eccentricities, and Schilling’s Emily has yet to have her mind opened to the realities of the world in the way that time in prison has done so for Piper.

Thrown into these parts, Scott and Schilling are primed for success. Opposite them in a small cast of four are Jason Schwartzman, always happy to play over the top to delightful effect, as Kurt, and French actress Judith Godrèche, the odd woman out, as his wife Charlotte. It is unclear what Kurt and Charlotte do for work, but their house is giant and gorgeous. It is evident that they have a free-spirited lifestyle, and their tastes may be far more outlandish than the buttoned-up Alex and Emily are prepared for, leading to a hilarious and hilariously uncomfortable extended night that just gets weirder as it continues.

At just eighty minutes, this film is not setting out to capture a large period of time. Instead, it spans just one night that begins as an ordinary dinner party and transforms into an evening of openness filled with drugs, nudity, and brutally open conversation about sexuality, work, and more. Emily is the stand-in for the audience, watching the ridiculousness unfold as Alex, initially hesitant and unsure of what is going on around him, comes to embrace the freedom that comes with discarding normal societal expectations and just letting loose. The film gets ahead even of where Emily is barely comfortable, which at the very least makes it shocking and entertaining.

This cast of four works splendidly with Patrick Brice’s script. Scott, his face grizzled with a goatee, is eager to please and just as nervous about succeeding at it, and his subsequent opening up proves very watchable. Schilling, who is more discerning and self-assured, is best at creating subtle reactions to truly bizarre situations. Schwartzman, who could talk for hours with no script, is marvelous as a man who seems overcome with delusions of grandeur, but that which he boasts of may in fact be genuine. Godrèche, the only non-American in the group, gels well with her co-stars, representing a different sensibility that makes Charlotte an intriguing complement to Kurt. There is no denying the odd, unsettling nature of this film, but it is an enjoyable and wild blast that leaves a distinctly amusing impression. 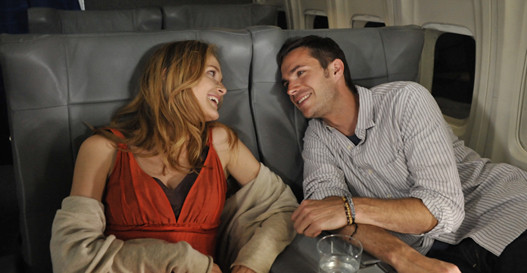