GETT: The Trial of Viviane Amsalem

In the Jerry Bock, Sheldon Harnick, and Joseph Stein’s musical “Fiddler on the Roof,” Tevye, the principal character, notes that “without tradition, we’re as shaky as a fiddler on the roof.”  Point well taken.  Certain rituals and traditions cement families and bind citizens more closely to their countries.  Think of the traditional fireworks on the Fourth of July, the birds shared on Thanksgiving Day, the respect to our fallen servicemen on Memorial Day.  But at one point, tradition should take some steps backwards and realize that progressive changes should be made in light of current conditions.  Therefore, Gay marriage rights should trump the holds of traditional marriage, and civil rights should be enjoyed not just by property holders or white males but extended to all citizens and residents.

But try to tell this to the religious courts in Israel!  As backward a tradition as you can imagine, in Israel the religious courts—which are run by Orthodox judges and rabbis, determining the enforcement of religious laws—have an exclusive say over marriage and divorce.  And religious courts, citing tradition (perhaps the Talmud but not likely the original Five Books), dictate that if a man is not willing to grant a divorce to his wife as the pleading woman wishes, there is no divorce.  No matter that they may be separated for a year, five years, ten years or a lifetime.  If a man says “no” the answer is “no.”

There is however one loophole.  If witnesses can be found to assert that the man beats his wife or refuses to support her, the court could conceivably order the divorce, which is Hebrew is called a gett.  Such is the theme of “Gett: The Trial of Viviane Amsalem,” which concerns a couple from Israel’s Jewish-Moroccan community.  They are Sephardim, i.e. among the Israelis who had emigrated from Spain and the Arab world, and rules are even stricter with them than with the Ashkenazi community, or folks who emigrated from the West.  We can therefore assume that the title character, Viviane, having been married for thirty years and having produced several children, will go through hell in order to gain her freedom from a man she simply no longer loves and who, in return, allegedly does not speak to her.

The man is Elisha Amsalem (Simon Abkarian), who despite court appearances over the last five years, refuses to grant a gett to his wife though they have been living apart for years.  Why is he so stubborn?  We never really find out, though we have theories, such as “He does not want to free her to be without another man,” or “He simply wants to bust her chops,” or “He loves her so much that he cannot part with her notwithstanding her antagonistic feelings toward him.”

Witness after witness comes forth, the three-judge bench of Orthodox Jews hoping, perhaps, that they can indict the man for serious abuse, but even the people called by the plaintiff, Viviane (Ronit Alkabetz—who co-wrote the film as well as two previous works on Moroccan-Israeli themes), seem to speak in glowing terms about Elisha.  One woman even calls him “a saint.”  (This is a deliberate mis-translation from the Hebrew to avoid using a Christian term.  She actually calls him “a tzadik,” or “holy man.”)

The battle lines are drawn between Viviane and Elisha, between Viviane’s attorney Carmel Ben Tovim (Menashe Noy) and Elisha’s, all listened to by a court headed by Rabbi Solomon (Eli Gornstein).  Among the most riveting moments are Viviane’s monologues.  She sits mostly in silence.  We sympathize with her because the judges and all of religious laws side with the man.  Yet the man in this case is not a fornicator and not an abuser.  Still, as an American, I believe that if she wants the split to be legalized, she should be granted her wish, and so should the rabbis since, after all, doesn’t Jewish law invite Jews to “be fruitful and multiply?”  If she cannot be legally cut off from a dead marriage, and she doesn’t want to commit adultery, how would she do just that?  (She’s about fifty years old, so the only issue is her desire, for whatever reason, to get her freedom, and, that’s good enough for me.)

Though all the action takes place in a single room, which violates basic cinematic precepts, the testimony—in fact the whole megillah—is electrifying.  Short of dramas like Edward Dmytryk’s 1954 film “The Caine Mutiny Court Martial” and Sidney Lumet’s 1957 work “12 Angry Men,” you’re not likely to witness a filmed courtroom drama with more compelling fireworks than this one.  Of course Sivan Lavy, the script supervisor, uses the drama to indict the reactionary domestic politics of his country, which appear to make Israel no better with regard to marriage and divorce than conservative Muslim states like Saudi Arabia and Iran.  In fact, even here, the court appears to praise the husband simply because while they were living together, he allowed his wife to go out into the street alone.

While the histrionics may have been exaggerated for dramatic effect, I have little doubt that the writer and director and the wonderful actors are adhering to actual principles in Israel where despite whether the Prime Minister is right wing like Bibi Netanyahu or left of center like Shimon Peres, religious courts will continue their backward practices freely.  My only regret is that Israel’s usual detractors will use this film to further their biased, one-sided arguments against the state, but then, who said these jokers really need this movie to continue making their boringly predictable broadsides? 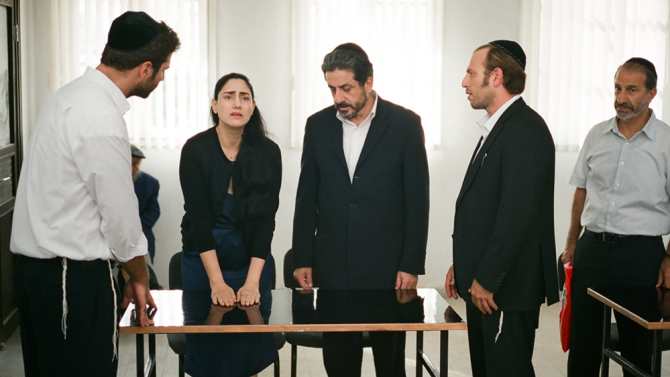