The frightening secrets and legends of the infamous ‘Ouija’ board are finally being revealed. In celebration of the home release of the horror film, which was unveiled today on Blu-ray and DVD, Shockya is debuting a new exclusive clip from the game’s big-screen adaptation. The clip also honors the feature film directorial debut of Stiles White, who’s also co-scribed the script with his frequent writing partner, Juliet Snowden. The two previously scribed such horror feature films as ‘The Possession’ and ‘Boogeyman,’ as well as the horror short, ‘The Need,’ and the action mystery drama, ‘Knowing.’

The exclusive ‘Ouija’ clip follows a Ouija board that’s placed on a red carpet. As the camera pans out from the game, children are heard chanting, “As friends we gather, our hearts are true. Spirits near, we call to you.” The children, who are revealed to be two girls, are sitting on the floor as they look at each other and recite the poem in unison. As one of the girls then asks if a spirit is with them, the other girl screams as she sees a flash of an older woman.

One of the film’s producers, Bennett Schneir, is then shown sitting in a movie theater. He reveals the film’s title game is a mix of wish fulfillment and desire, as people want to connect with the other side. A glimpse of the movie’s main cast is then show as they were filming a scene with the Ouija board, while the producer adds the game is like a cosmic telephone into another world.

White is also then featured in the cinema, as he describes how the Ouija board was a device that had its origins in the spiritualism movement. Snowden also offered a description about the title game, adding that the Ouija was created in the mid-1800s, and was originally called a spirit board. She noted that people approached the board with an intense need. The co-scribe then revealed that Abraham Lincoln’s wife, Mary Ann Todd Lincoln, even used a Ouija board, as she had a son who died young. She was so devastated by her loss, she wanted to contact him.

As the co-writer discussed the Ouija’s beginning and history, one of actress Shelley Hennig’s scenes is shown, following her character, Debbie Galardi, sitting in front of a fireplace, as she reaches for the board. The performer’s co-star, Olivia Wilde, who plays Laine Morris, is then shown in some of her scenes. She ponders if there’s a way to continue to communicate with those who have died through the board, as she looks through Debbie’s belongings.

Universal Studios Home Entertainment is distributing ‘Ouija’s on Blu-ray and DVD, after Universal Pictures released the movie in theaters on October 24, 2014. The horror film’s Blu-ray features several exclusive Bonus Features, including ‘The Spirit Board: An Evolution.’ The feature allows audiences to journey back in time and trace the history of “automatic writing” and “talking boards,” as it goes from ritual to novelty act to board game and now movie. The Blu-ray also includes ‘Icon of the Unknown,’ which offers viewers a look at the mystical and scientific explanations for how the Ouija board works. The Blu-ray and DVD also comprise the Bonus Feature, ‘Adapting the Fear,’ which allows fans to join the cast and crew on the movie’s set, and learn how they adapted this portal to the spirit world into a feature film.

The following synopsis for ‘Ouija’ has been released by Universal Pictures Home Entertainment:

Inspired by the classic occult board game, a group of teens accidentally unleash a dark power from the other side in Ouija coming to Blu-ray Combo Pack, including Blu-ray, DVD and Digital HD with UltraViolet, on February 3 from Universal Pictures Home Entertainment. Produced by Platinum Dunes partners Michael Bay, Brad Fuller and Andrew Form (‘The Purge,’ ‘The Texas Chainsaw Massacre,’ ‘Friday the 13th’) and Blumhouse Productions’ Jason Blum (‘Paranormal Activity,’ ‘Insidious,’ ‘The Purge’), Ouija delivers extra chills with exclusive bonus content including a deeper look inside the mystery of the Ouija board, film commentary and much more.

After Debbie (Shelley Hennig, ‘Teen Wolf’) suddenly dies, her best friend Laine (Olivia Cooke, ‘Bates Motel,’) attempts to contact her using an antique Ouija board she finds in Debbie’s room. When the curious teen begins asking the board questions and stumbles upon the mystery of her friend’s death, Laine discovers a resident spirit calling itself DZ, and eerie, inexplicable events begin to follow her. The group of friends digs deeper into the history of Debbie’s house and are shocked to find that Debbie wasn’t the first victim—and won’t be be the last if they don’t figure out how to close the portal to the spirit world they’ve opened. 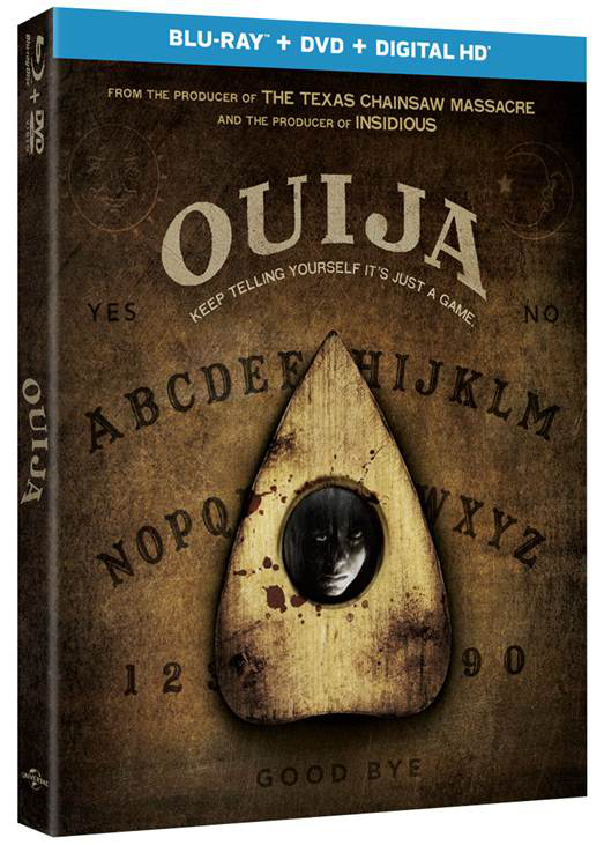