Michael Shannon and Kevin Spacey are in character as the title characters in the upcoming comedy, ‘Elvis & Nixon,’ in the film’s first-look image. The initial still showcases Shannon as Elvis Presley and Spacey, this year’s Golden Globe Award winner for Best Actor – Television Series Drama, for his portrayal of American president, Frank Underwood, as another national leader, Richard Nixon. The picture shows the two pioneers as they’re seated across from each other in the Oval Office during their noteworthy meeting together on December 21, 1970. During the consultation, the singer asked the president to be named as a special FBI operative.

The first-look image for ‘Elvis & Nixon,’ which is being produced by Bloom, was unveiled as the movie is currently shooting in New Orleans. The film, which is being directed by ‘Hateship Loveship ‘ helmer, Liza Johnson, is expected to wrap production on Friday. The movie also stars Colin Hanks as Egil Krogh, Alex Pettyfer as Jerry Schilling, Johnny Knoxville, Tracy Letts and singer Sky Ferreira.

The screenplay for ‘Elvis & Nixon’ was written by Joey Sagal, Hanala Sagal and ‘Saw’ actor Cary Elwes, who made his feature film writing debut on the comedy. The performer’s brother, Cassian, is producing the movie with Holly Wiersma. Autumn Pictures’ David Hansen and Johnny Mac are financing and executive producing the movie with Byron Wetzel, Robert Ogden Barnum and Schilling. 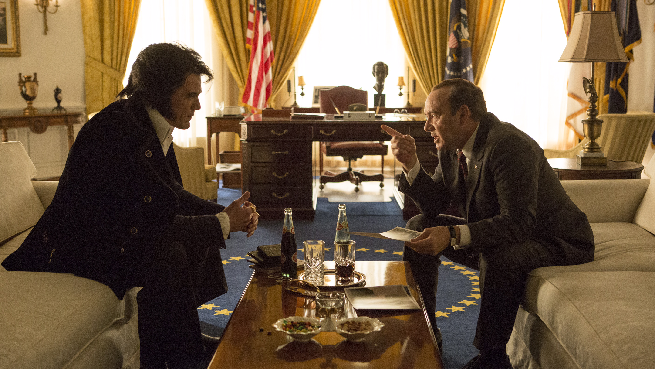