The dystopian future is a terrifying place to conceive of and a fantastic setting for literature and cinema. Fahrenheit 451, 1984, and The Walking Dead are just several of the many examples of what is possible and thinkable in a dystopian world. Many novels and short stories from the past half century have been made into films, and the latest is Robert C. O’Brien’s posthumously-published 1974 novel Z for Zachariah. This film takes a personal and intimate approach to its characters, skipping any explanation of how the apocalypse happened and instead focusing just on its three protagonists for a powerful and engaging story.

Z for Zachariah introduces its characters one by one, all from the perspective of Ann (Margot Robbie), who serves as the film’s narrator before regular dialogue is present. Ann attributes her survival to the preparedness of her family and to her own know-how after growing up on a farm. Her parents and her brother courageously went out to comb the countryside for survivors, yet no one returned. Ann tends to her home and to her land and occasionally ventures out in full gear to scan for radiation and bring back vital supplies. Her first instinct upon encountering Loomis (Chiwetel Ejiofor), who she finds bathing in water she knows to be toxic, is to warn him, and then help speed him to recovery in her home. People are hard to come by in this new world order, and they may as well all be friends.

The setup of Z for Zachariah is rather simplistic. Ann has come to a certain way of life which is routine and solitary, and she knows how she can survive, even if she is not sure how long that stability will last. Loomis, an engineer, arrives, grateful for her hospitality, and turns out to be a perfect match for Ann, using his technical expertise in collaboration with her resourcefulness to figure out how best to extend their odds of survival and utilize whatever precious technology may still be left. That creates a spirit of adventure and discovery, which is only aided by the third act arrival of Caleb (Chris Pine), who eagerly offers his assistance in the construction of a makeshift waterfall electricity generator.

This tight-knit three-member cast includes three fabulous performers with diverse film experience. Robbie broke out in The Wolf of Wall Street as a spoiled diva, an energy she curbs completely here to portray the hard-working, down-to-earth, genuine Ann. Ejiofor was a free man cast into destitute circumstances in 12 Years a Slave, and as Loomis, he is just as humble and polite but more technically-minded. Pine, who charmed in Into the Woods and the Star Trek series, is not much different, though he realizes that his prospective audience is considerably smaller. These three performances work well together to drive a story with substance but not a great amount of intrigue. Director Craig Zobel, whose last film was the haunting Compliance, has once again taken a concept that might seem small and subtle in nature and turned it into an affecting feature-length film. Those expecting an enormous uplifting or devastating climax may be disappointed, but this film is fully engaging for the entirety of its excerpt from Ann’s dystopian life. 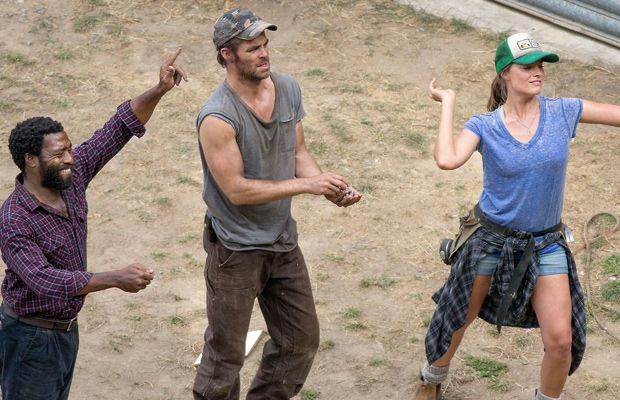