People are often faced with shocking and surprising realities after they finally achieve their anticipated transition into the real world. Anastasia “Ana” Steele, the somewhat reserved main protagonist in the long-awaited film adaptation of author E. L. James’ first entry in her provocative BDSM book trilogy, ‘Fifty Shades of Grey,’ faces a startling revelation when she graduates from college, and witnesses how relationships with older, professional men truly work. The movie, which fans of the novel have been waiting for since its release in 2011, will also make people realize that not all transitions are as exhilarating and satisfying as they may expect, despite the best of intentions.

‘Fifty Shades of Grey’ follows a sexually inexperienced young woman, Ana (Dakota Johnson), who’s about to graduate from college with a degree in English literature. After offering to help her sick roommate, Kate (Eloise Mumford), a journalism major who’s scheduled to write a profile on one of their school’s major benefactors, Christian Grey (Jamie Dornan), who’s scheduled to speak during their graduation ceremony, Ana travels from Portland to Seattle to interview him. While initially nervous about meeting the young billionaire, who has made his fortune in telecommunications, Ana quickly becomes enthralled with the mysteriously intimidating businessman.

After a few chance encounters following their interview, including at the hardware store where Ana works in Portland and a bar she visits with her friends after they finish their finals, the two become drawn to spending more time with each other. Despite the warnings by Kate and Ana’s mother, Carla (Jennifer Ehle), that she doesn’t have to rush the relationship, and Christian’s own admission that he’s not the type to make a meaningful emotional and romantic commitment to women, Ana insists on seeing him again. But she’s soon shocked to discover that he was serious that he isn’t the type of man she’s looking for, as he reveals he regularly indulges in BDSM relationships with women.

Despite her initial shock and confusion over why Christian would only be interested in pursuing a purely sadomasochistic relationship with her, instead of a romantic one, Ana decides to concede to the domineering sexual connection he seeks to pursue with her. After they negotiate the terms of their relationship so that Ana feels comfortable indulging his desires, the two quickly begin engaging in the sexual acts they’ve agreed to experiment in together. Although Christian truly begins to develop romantic feelings for Ana, and she becomes more willing to try some of the acts he enjoys, she begins to resent that he’s not willing to make more compromises to please her, which leaves their future and relationship in question.

Many critics of James’ ‘Fifty Shades of Grey’ book trilogy have condemned the author for glorifying domestic physical and emotional violence against women, as well as squandering feminist advances and embracing women’s discomfort with embracing their own free will. However, the novels attracted so many fans because of Ana and Christian’s strong emotional connection, which powerfully transcended the erotic sexual relationship they initially embarked on, as well as their equal willingness to transform to fit each other’s needs and desires. While James infused her novels’ stories with enthrallingly descriptive explanations into the two main characters’ actions, including Ana’s longing to wait to be with the person she truly loves and who understands her needs, and Christian’s fear of emotional intimacy, particularly after the harrowing relationship he had with his birth mother when he was a young child, Marcel unfortunately failed to do the same in her screenplay.

Throughout the book trilogy, Ana is intriguingly presented as being willing and curious to explore Christian’s world, in an effort to please him, but was also determined to follow her professional literary dreams. She diligently attended to her duties at her new publishing job in Seattle after she graduated, and was unwilling to allow him to take total control over her life choices. But in the film, Ana disappointedly doesn’t even pursue her career goals once she begins her relationship with him, making it appear that she only moved to Seattle with Kate just to be with Christian. Conversely, James thoroughly described his harrowing background as a child, and his continuous struggle and determination to prove to his adoptive family, the world and most importantly, Ana, that he’s nothing like his birth mother. While Marcel understandably wouldn’t be able to fit all of the characters’ background information from the over 500 pages of the trilogy’s initial novel into its adapted screenplay, the overall film largely failed to capture the true essence of the at-times emotionally tortured characters’ motivations.

While Johnson and Dornan both garnered justified attention for their television roles before signing on to star in ‘Fifty Shades of Grey,’ after she starred on the sitcom, ‘Ben and Kate,’ and he appeared on such drama series as ‘One Upon a Time’ and ‘The Fall,’ their transitions into their break-out film roles together wasn’t as noteworthy and compelling. Johnson did effortlessly exemplify the innocent and demure reservations Ana held about entering into a contracted sexual relationship with Christian. Dornan, meanwhile, perfectly embodied the conservative public persona of his troubled protagonist, who also wasn’t afraid to carry his need to maintain control into his personal relationships. But the actors’ chemistry appeared to be the most natural during the first time Ana and Christian have sex together, without the use of the BDSM antics he has so longingly embraced. Their more brief and unconventional sexual interactions together later into the romantic drama unfortunately don’t radiate as much passion and desire that James so descriptively and intriguingly explored throughout the series’ first book.

Unfortunately, the need to leave out many accounts from James’ greatly detailed book, in order to make a more comprehensible film, left the drama’s narrative feeling somewhat unfulfilling, as Ana and Christian’s motives weren’t always thoroughly explored. Combined with Johnson and Dornan’s disappointing underdeveloped chemistry together, despite the fact that the two actors impeccably fit the novelist’s descriptions of her two troubled protagonists, the romantic drama unfortunately wasn’t as gratifying as its tantalizing source material. 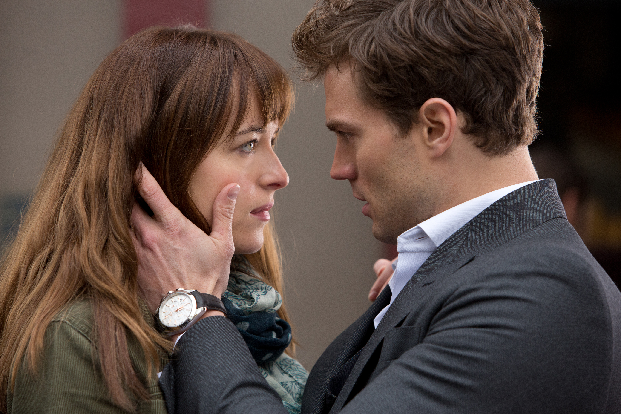